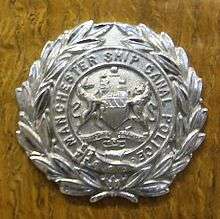 On formation in 1893 the force consisted of one Superintendent and 15 other ranks.[1] In 1977, it consisted of 103 constables.[2] Members of the force were appointed as constables under two Acts of Parliament: the Canals Offences Act 1840 and the Harbours, Docks and Piers Clauses Act 1847 (which was incorporated by and with the Manchester Ship Canal Act 1885).[3][4] Their jurisdiction extended from Manchester to Eastham, Merseyside where the Manchester Ship Canal started at the River Mersey, along the length of the canal and within one mile of same and to its subsidiary waterways, canals and adjoining works.[1]

This article is issued from Wikipedia - version of the 9/11/2015. The text is available under the Creative Commons Attribution/Share Alike but additional terms may apply for the media files.