St. Peter and St. Paul Church at Little Gaddesden, where many Egerton family members are buried in the Bridgewater Chapel

Part of the parish was formerly in Buckinghamshire. This includes Witchcraft Bottom, notable as the alleged location where the last witch in Buckinghamshire was tried and hanged. The village of Little Gaddesden borders both Buckinghamshire and Bedfordshire, whilst being situated in the county of Hertfordshire.

Little Gaddesden and the surrounding area of the Ashridge Estate is owned and managed by the National Trust. This area has been used in many films, notably: First Knight, Stardust, the Harry Potter series, Son of Rambow and more recently Robin Hood starring Russell Crowe. TV programmes filmed here include Marchlands, Midsomer Murders Lewis, Cranford, and a Jamie Oliver[3] advertisement for Sainsburys.

Little Gaddesden has many period properties, of note: Ashridge House, (designed by Sir James Wyattville along with gardens and grounds designed by Sir Humphrey Repton and Capability Brown - Golden Valley) The Manor House situated on the Green along with John O’Gaddesden House and Marian House, Little Gaddesden House along Nettleden Road heading towards the hamlet of Nettleden and the Old Rectory past the village shop heading to Ringshall.

The Ashridge Estate that surrounds the village is a 5,000-acre (20 km2) area of open countryside and woodland on the edge of the Chiltern Hills, with a rich variety of wildlife including fallow dear, muntjac and the renowned red kite. There are large areas of mature woodlands with carpets of spring bluebells and fine autumnal displays, along with the panorama from the Bridgewater Monument. In the early 17th century, Thomas Egerton, 1st Viscount Brackley, had purchased Ashridge House, one of the largest country houses in England, from Queen Elizabeth I, who had inherited it from her father who had appropriated it after the Dissolution of the Monasteries in 1539. Ashridge House served the Egerton family as a residence until the 19th century. The Egertons later had a family chapel (the Bridgewater Chapel) with burial vault in Little Gaddesden Church,[4] where many monuments commemorate the Dukes and Earls of Bridgewater and their families.[5] Among those buried here is the 3rd Duke of Bridgewater,[6] famous as the originator of British inland navigation and the Bridgewater Canal.

Little Gaddesden is an Area of Outstanding Natural Beauty (ANOB) and a Conservation Area protected by the National Trust.

There is a vigorous community life with 30 different clubs and societies. The oldest of these is probably the Women's Institute (founded in 1919) and the Royal British Legion. 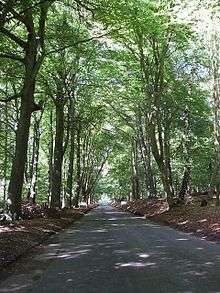