Llanfair Pwllgwyngyll or Llanfairpwllgwyngyll (pronounced [ɬanˌvair puɬˈɡwɨ̞nɡɨ̞ɬ]) is a large village and community on the island of Anglesey in Wales, situated on the Menai Strait next to the Britannia Bridge and across the strait from Bangor. It is alternatively known as Llanfairpwll, Llanfair PG, or Llanfair­pwllgwyngyll­gogery­chwyrn­drobwll­llan­tysilio­gogo­goch.

The long form of the name was invented for promotional purposes in the 1860s; with 58 characters it is the longest place name in Europe and the second longest official one-word place name in the world.[3] 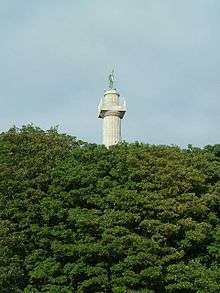 A settlement has existed on the site of the village since the Neolithic era (4000–2000 BC), with subsistence agriculture and fishing the most common occupations for much of its early history. The island of Anglesey was at that point reachable only by boat across the Menai Strait. The area was briefly invaded and captured by the Romans under Gaius Suetonius Paulinus, temporarily abandoned in order to consolidate forces against Boudicca, then held until the end of Roman Britain.

With the withdrawal of the Roman forces, the area fell under the control of the early medieval Kingdom of Gwynedd. Under this feudal system, the residents worked small farms for the king. The rural nature of the settlement meant that the village had a population of only around 80 in 1563.

With the introduction of estates in the 16th century, much of the land was absorbed into the Earldom of Uxbridge, which later became the Marquisate of Anglesey; the inhabitants became tenant farmers on enclosures. In 1844, for example, 92% of the land in Llanfairpwll was owned by just three individuals. The population of the village boomed, with a population of 385 in the 1801 census and 83 houses, most of them in the old village (Pentre Uchaf, Upper Village).

In 1826, Anglesey was connected to the rest of Wales by the construction of the Menai Suspension Bridge by Thomas Telford, and connected with London in 1850 with the building of the Britannia Bridge and the busy North Wales Coast railway line, which connected London to the ferry port of Holyhead. The village decentralised, splitting into Upper Village (Pentre Uchaf), which was made up mainly of the older houses and farms, and the new Lower Village (Pentre Isaf), built around the railway station and consisting mostly of shops and workshops. The village became a hub of commerce, as the railways and road network brought traders and customers from across north Wales.

The first ever meeting of the Women's Institute took place in Llanfairpwll in 1915 and the movement (which began in Canada) then spread through the rest of the British Isles.

The long form of the name is the longest place name in the United Kingdom and one of the longest in the world at 58 characters (51 "letters" since "ch" and "ll" are digraphs, and are treated as single letters in the Welsh language).

The name is also shortened to Llanfair PG, which is sufficient to distinguish it from the many other Welsh villages with Llanfair in their names. Other variant forms use the longer name but with tysilio mutated to dysilio, and/or with a hyphen between drobwll and llan. In Welsh, the initial Ll may be mutated to a single L in some contexts.

Significance of the name

Illustration of a sign showing the name and English translation 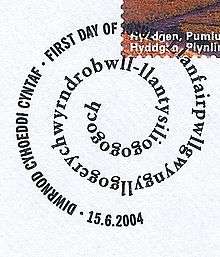 Postmark from the village

The long name was contrived in the 1860s to bestow upon the station the feature of having the longest name of any railway station in Britain, an early example of a publicity stunt. The village's website credits the name to a cobbler from the nearby village of Menai Bridge. According to Sir John Morris-Jones the name was created by a local tailor, whose name he did not confide, letting the secret die with him.[4][5] The current postmark shows the name Llanfairpwllgwyngyll, but there are contemporary examples of the longer name seen below. 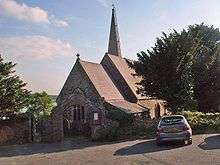 The village was originally known as Llanfair Pwllgwyngyll ("St Mary's in Hollow of the White Hazel Township"). Pwllgwyngyll was the original medieval township where the village is today.[6] Old variants (with the Welsh spelling normalised) were Llanfair y Pwllgwyngyll (y = "(of) the") and Llanfair Ymhwll Gwyngyll (mh is a sandhi change (nasal mutation) from 'n p', and "yn" = 'in').

The sign at the railway station gives an approximation of the correct pronunciation for English speakers.

James Pringle Weavers shop with English translation of the name

The long name of the village is pronounced [ˌɬanvair­pʊɬˌɡwɨ̞ŋɡɨ̞ɬ­ɡɔˌɡɛrə­ˌχwərn­ˌdrɔbʊɬ­ˌɬan­təˌsɪljɔ­ˌɡɔɡɔ­ˈɡoːχ].[7]

The approximate pronunciation in English orthography is given at the station as: Llan-vire-pooll-guin-gill-go-ger-u-queern-drob-ooll-llandus-ilio-gogo-goch. The ch is a voiceless uvular fricative [χ] or voiceless velar fricative as in "Bach" ([bax]: see ach-Laut) in most varieties of German. The ll is a voiceless lateral fricative [ɬ], a sound that does not occur in English, but can be approximated by holding the tongue in the position for an [l] and pronouncing an [h].

The song "Red Cave" by Brooklyn-based indie rock band Yeasayer references the English translation of the village name with these lyrics: "Mary's house in the hollow of the white hazel rapid whirlpool at the church of the red cave."

The name was used in the movie Barbarella as the password for the headquarters of Dildano, the comical revolutionary, and by Peter Sellers in the film The Road to Hong Kong where he plays a quack doctor who asks Bob Hope to say it instead of the more usual "Ahh" when examining his teeth.

The name was used as a solution in a cryptic crossword compiled by Roger Squires for The Telford and Wrekin News when royalty visited Ironbridge in 1979 on the occasion of the 200th anniversary of the first iron bridge. It was submitted to Guinness World Records as the longest word to appear in a published crossword. The clue was "Giggling troll follows Clancy, Larry, Billy and Peggy who howl, wrongly disturbing a place in Wales (58)", where all but the last five words formed an anagram.[8]

The song "The Boy From..." by Stephen Sondheim and Mary Rodgers features the place name juxtaposed with a similarly long, but fictional, Spanish place name.

The computer game Civilization V awards the "Longest. Name. Ever." Steam achievement to players for having a city named Llanfairpwllgwyngyll.[9]

Actress Naomi Watts once lived in the village with her grandfather.[10] Watts and Taron Egerton, who also spent years of his childhood in the village, both appeared on U.S. late-night talk shows where they pronounced the name of their home.[11][12]

In September 2015, Channel 4 Welsh weatherman Liam Dutton successfully pronounced the full name of the village during a live forecast. Within 24 hours of being uploaded to YouTube by Channel 4, the video of the pronunciation had accumulated well over five million views,[13] and as of July 2016, the video had 14.3 million views.[14]