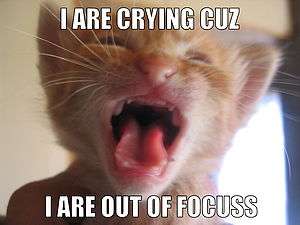 A lolcat (pronounced /ˈlɒlkæt/ LOL-kat) is an image macro of one or more cats. The image's text is often idiosyncratic and grammatically incorrect, and is known as lolspeak or kitty pidgin.

Lolcat is a compound word of the acronymic abbreviation for LOL (laugh out loud) and the word cat.[1][2] A synonym for lolcat is cat macro, since the images are a type of image macro.[3] Lolcats are commonly designed for photo sharing imageboards and other Internet forums. 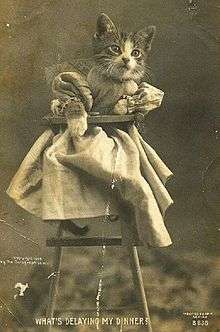 The first recorded use of the term "lolcat" is from the anonymous imageboard 4chan.[6][7][8] The word "Lolcat" was in use as early as June 2006, and the domain name "LOLcats.com" was registered on June 14, 2006.[9] Their popularity was spread through usage on forums such as Something Awful.[10] The News Journal states that "some trace the lolcats back to the site 4chan, which features bizarre cat pictures on Saturdays, or 'Caturdays'." Ikenburg adds that the images have been "slinking around the Internet for years under various labels, but they did not become a sensation until early 2007 with the advent of I Can Has Cheezburger?"[11] The first image on "I CAN HAZ CHEEZBURGER?" was posted on January 11, 2007, and was allegedly from the Something Awful website."[12][13] Lev Grossman of Time wrote that the oldest known example "probably dates to 2006,"[14] but later corrected himself in a blog post[15] where he recapitulated the anecdotal evidence readers had sent him, placing the origin of "Caturday" and many of the images now known by a few as "lolcats" in early 2005. The domain name "caturday.com" was registered on April 30, 2005.[16]

The term lolcat gained national media attention in the United States when it was covered by Time, which wrote that non-commercialized phenomena of the sort are increasingly rare, stating that lolcats have "a distinctly old-school, early 1990s, Usenet feel to [them]".[17] Entertainment Weekly put them on its end-of-the-decade, "best-of" list, saying, "Da cutest distractshun of da decaid? Y, lolcats of corse! We can neber haz enuf of deez capshioned pics of cuddlie kittehs."[18] "Lolcat" was also a runner-up under the "Most Creative" category under the American Dialect Society Word of the Year Awards, losing out to "Googlegänger".[19]

In December 2014, the word lolcat entered the Oxford English Dictionary, appearing in its online version.[20] Lolcat is a composite of two words, "lol" and "cat". "Lol" stands for "Laugh out Loud" or "Laughing out Loud"; hence, lolcats are intended to be funny and to include jokes.[21] Lolcats images comprise a photo of a cat with a large caption characteristically set in a heavy sans serif font such as Impact or Arial Black.[22] The image is, on occasion, digitally edited for effect.

The caption generally acts as a speech balloon encompassing a comment from the cat, or as a description of the depicted scene. The caption is intentionally written with deviations from standard English spelling and grammar,[22] featuring "strangely-conjugated verbs, but a tendency to converge to a new set of rules in spelling and grammar".[22][23][24] The text parodies the grammar-poor patois stereotypically attributed to Internet slang. Frequently, lolcat captions take the form of phrasal templates.[24] Some phrases have a known source, usually a well-known Internet meme, such as All your base are belong to us or Do not want,[25] while others don't. The language of lolcats has also been likened to baby talk,[26] however it draws on a variety of linguistic resources, not just the imitation of baby talk.[27]

Common themes include jokes of the form "Im in ur [noun], [verb]-ing ur [related noun]."[28] Many lolcat images capture cats performing characteristically human actions or appearing to use modern technology, such as computers.

There are several well-known lolcat images and single-word captions that have spawned many variations and imitations, including "Ceiling Cat" (see below). Others include Fail (a cat with a slice of processed cheese on its face)[29] and "I Can Has Cheezburger" (a portrait of a blue British Shorthair).[30] Another popular format is "[Adjective] cat is [adjective/noun]."

"Ceiling Cat" is a character spawned by the meme. The original image was an image macro with a picture of a cat looking out of a hole in a ceiling, captioned "Ceiling Cat is watching you masturbate."[31] There followed numerous image macros with the format "Ceiling Cat is watching you [verb ending in/rhyming with -ate]" with Ceiling Cat superimposed in the upper left hand corner of an image macro depicting the appropriate action. The underlying theme is that the cat is looking down on you, almost in a form of judgement. The character is also featured in a project to translate the Bible to lolspeak. "Ceiling Cat" and the corresponding "Basement Cat" (a black cat who lives in the basement) represent good and evil (sometimes God and Satan) in the lolcat universe.[32][33][34]

Variations on the lolcat concept include captioning photos of other animals in a similar style (e.g. loldogs for dogs, etc.).

The syntax of lolcat captions was used as the basis for LOLCODE, an esoteric programming language with interpreters and compilers available in .NET Framework, Perl, etc.[1]

In the game Minecraft, there is an option to change language settings to LOLCAT.

This audio file was created from a revision of the "Lolcat" article dated 2008-04-04, and does not reflect subsequent edits to the article. (Audio help)
More spoken articles