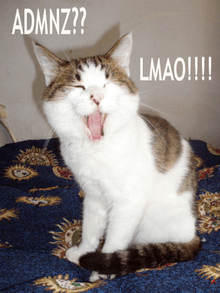 LOL or lol, an acronym for laugh(ing) out loud,[1][2][3] or lots of laughs,[4][5][6] is a popular element of Internet slang. It was first used almost exclusively on Usenet, but has since become widespread in other forms of computer-mediated communication and even face-to-face communication. It is one of many initialisms for expressing bodily reactions, in particular laughter, as text, including initialisms for more emphatic expressions of laughter such as LMAO[7] ("laugh(ing) my ass off") and ROFL[8][9][10] (or its older form ROTFL;[11][12] "roll(ing) on the floor laughing"). Other unrelated expansions include the now mostly obsolete "lots of luck" or "lots of love" used in letter-writing.[13]

The list of acronyms "grows by the month"[9] and they are collected along with emoticons and smileys into folk dictionaries that are circulated informally amongst users of Usenet, IRC, and other forms of (textual) computer-mediated communication.[14] These initialisms are controversial, and several authors[15][16][17][18] recommend against their use, either in general or in specific contexts such as business communications.

LOL was first documented in the Oxford English Dictionary in March 2011.[19]

Laccetti (professor of humanities at Stevens Institute of Technology) and Molski, in their essay entitled The Lost Art of Writing, are critical of the terms, predicting reduced chances of employment for students who use such slang, stating that, "Unfortunately for these students, their bosses will not be 'lol' when they read a report that lacks proper punctuation and grammar, has numerous misspellings, various made-up words, and silly acronyms."[15][16] Fondiller and Nerone in their style manual assert that "professional or business communication should never be careless or poorly constructed" whether one is writing an electronic mail message or an article for publication, and warn against the use of smileys and these abbreviations, stating that they are "no more than e-mail slang and have no place in business communication".[17]

Yunker and Barry in a study of online courses and how they can be improved through podcasting have found that these slang terms, and emoticons as well, are "often misunderstood" by students and are "difficult to decipher" unless their meanings are explained in advance. They single out the example of "ROFL" as not obviously being the abbreviation of "rolling on the floor laughing" (emphasis added).[18] Haig singles out LOL as one of the three most popular initialisms in Internet slang, alongside BFN ("bye for now") and IMHO ("in my honest/humble opinion"). He describes the various initialisms of Internet slang as convenient, but warns that "as ever more obscure acronyms emerge they can also be rather confusing".[1] Bidgoli likewise states that these initialisms "save keystrokes for the sender but [...] might make comprehension of the message more difficult for the receiver" and that "[s]lang may hold different meanings and lead to misunderstandings especially in international settings"; he advises that they be used "only when you are sure that the other person knows the meaning".[20]

Shortis observes that ROFL is a means of "annotating text with stage directions".[10] Hershock, in discussing these terms in the context of performative utterances, points out the difference between telling someone that one is laughing out loud and actually laughing out loud: "The latter response is a straightforward action. The former is a self-reflexive representation of an action: I not only do something but also show you that I am doing it. Or indeed, I may not actually laugh out loud but may use the locution 'LOL' to communicate my appreciation of your attempt at humor."[9]

David Crystal notes that use of LOL is not necessarily genuine, just as the use of smiley faces or grins is not necessarily genuine, posing the rhetorical question "How many people are actually 'laughing out loud' when they send LOL?".[21] Franzini concurs, stating that there is as yet no research that has determined the percentage of people who are actually laughing out loud when they write LOL.[2]

Victoria Clarke, in her analysis of telnet talkers, states that capitalization is important when people write LOL, and that "a user who types LOL may well be laughing louder than one who types lol", and opines that "these standard expressions of laughter are losing force through overuse".[22] Egan describes LOL, ROFL, and other initialisms as helpful as long as they are not overused. He recommends against their use in business correspondence because the recipient may not be aware of their meanings, and because in general neither they nor emoticons are (in his view) appropriate in such correspondence.[3] June Hines Moore shares that view.[23] So, too, does Lindsell-Roberts, who gives the same advice of not using them in business correspondence, "or you won't be LOL".[24]

Spread from written to spoken communication

LOL, ROFL, and other initialisms have crossed from computer-mediated communication to face-to-face communication. David Crystal—likening the introduction of LOL, ROFL, and others into spoken language in magnitude to the revolution of Johannes Gutenberg's invention of movable type in the 15th century—states that this is "a brand new variety of language evolving", invented by young people within five years, that "extend[s] the range of the language, the expressiveness [and] the richness of the language".[25][26]

Geoffrey K. Pullum points out that even if interjections such as LOL and ROFL were to become very common in spoken English, their "total effect on language" would be "utterly trivial".[27]

Conversely, a 2003 study of college students by Naomi Baron found that the use of these initialisms in computer-mediated communication (CMC), specifically in instant messaging, was actually lower than she had expected. The students "used few abbreviations, acronyms, and emoticons". The spelling was "reasonably good" and contractions were "not ubiquitous". Out of 2,185 transmissions, there were 90 initialisms in total, only 31 CMC-style abbreviations, and 49 emoticons.[26] Out of the 90 initialisms, 76 were occurrences of LOL.[28]

While LOL and similar acronyms are used a lot in real life speech, a lot of people are annoyed with this, say it accidentally or use it ironically.[29]

On March 24, 2011, LOL, along with other acronyms, was formally recognized in an update of the Oxford English Dictionary.[19][30] In their research, it was determined that the earliest recorded use of LOL as an initialism was for "little old lady" in the 1960s.[31] They also discovered that the oldest written record of the use of LOL in the contemporary meaning of "Laughing Out Loud" was from a message typed by Wayne Pearson in the 1980s, from the archives of Usenet.[32]

The past tense of lol is lolled. The participle form is lolling.

Variations on the theme

Commonly used equivalents in other languages

Most of these variants are usually found in lowercase.

In some languages with a non-Latin script, the abbreviation LOL itself is also often transliterated. See for example Arabic لول and Russian лол.

The word "lol" in other languages