A longhunter (or long hunter) was an 18th-century explorer and hunter who made expeditions into the American frontier wilderness for as much as six months at a time. Historian Emory Hamilton asserts that "The Long Hunter was peculiar to Southwest Virginia only, and nowhere else on any frontier did such hunts ever originate"[1] although the term has been used loosely to describe any unofficial American explorer of the period. Most long hunts started in the Holston River Valley near Chilhowie, Virginia. The hunters came from there and the adjacent valley of the Clinch River, where they were land owners or residents. The parties of two or three men (and rarely more) usually started their hunts in October and ended toward the end of March or early in April.[1]

The information gathered by longhunters in the 1760s and 1770s would prove critical to the early settlement of Tennessee and Kentucky. Many longhunters were employed by land surveyors seeking to take advantage of the departure of the French from the Ohio Valley at the end of the Seven Years' War. Some later helped guide settlers to Middle Tennessee and southeastern Kentucky.

The long hunters in Tennessee history 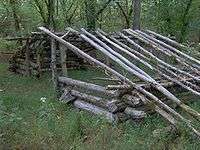 As colonial settlement approached the base of the Appalachian Mountains in the early 18th century, game in the Piedmont region became more scarce. Merchants returning from trade missions to Overhill Cherokee villages in the Tennessee Valley brought back news of the abundance of game west of the range, and began taking hunters along on their trade expeditions. In 1748 and 1750, Thomas Walker crossed the mountains and explored the Holston River valley, recording and widely publicizing the location of Cumberland Gap— a pass near the modern border of Virginia, Kentucky, and Tennessee— which allowed relatively easy access to the headwaters of the Tennessee and Cumberland rivers.[2]

In 1761, Elisha Walden (spelled variously "Wallen", "Wallin", and "Walling") led the first major recorded long hunt into what is now Tennessee. Walden set up a station camp in Lee County, Virginia, and trekked into the Clinch and Powell valleys in what is now Hawkins County, Tennessee. That same year, Colonel Adam Stephen led a regiment of Virginia soldiers and militia to Long Island of the Holston, in what is now Sullivan County, Tennessee. The expedition, which was launched in retaliation for the Cherokee sacking of Fort Loudoun in 1760, forced the Cherokee to sign a peace treaty.[3][4]

The end of the Seven Years' War in 1763 removed French claims to lands east of the Mississippi River. With the Cherokee threat minimized, long hunters (some of whom may have been veterans of Stephen's expedition) began crossing into Tennessee and Kentucky in greater numbers. In 1764, Daniel Boone and Richard Callaway explored the upper Holston Valley as agents for Richard Henderson, a land speculator who later played an important role in the early settlement of Tennessee.[5][6] A camp used by Boone and Callaway would later become the home of Boone's friend William Bean, Tennessee's first known permanent Euro-American settler. He built a cabin at the site around 1769.[7] 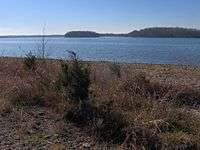 In 1766, James Smith led an ambitious long hunt into Middle and West Tennessee, following the Cumberland River all the way to its mouth. One member of the Smith expedition, Uriah Stone, was hunting along a tributary of the Cumberland when a French hunting companion stole all of his furs. The tributary was subsequently named Stones River.[8] Stone returned to the Cumberland valley in 1769 along with fellow hunters Kasper Mansker, Isaac and Abraham Bledsoe, Joseph Drake, and Robert Crockett. Although Crockett was killed, the various trails, salt licks and camping areas identified by the 1766 and 1769 expeditions would later help guide the first English settlers to the Middle Tennessee area.[9]

A royal proclamation issued by King George III in 1763 made it illegal to procure pelts from Cherokee lands without a trading license, which essentially barred hunting west of the Appalachian range. Both the Cherokee and the British, however, had considerable difficulty enforcing this ban. In 1769, Cherokee Chief Oconastota complained to the British Superintendent of Indian Affairs that the entire Cherokee Nation was "filling with Hunters, and the guns rattling every way on the path."[10] While some long hunters had their pelts confiscated by the Cherokee, and a rare few were even killed, most managed to avoid detection.[11]

In 1780, Kasper Mansker built a frontier station in what is now Goodlettsville, just north of Nashville. In 1986, the city of Goodlettsville built a replica of Mansker's Station (it is based on historic examples, as the fort's original layout is unknown), which is now open to the public. In the 1970s, the state of Tennessee established Long Hunter State Park along the J. Percy Priest Lake impoundment of Stones River, in the area where Uriah Stone had his furs stolen more than 200 years earlier.

The long hunters in Kentucky history 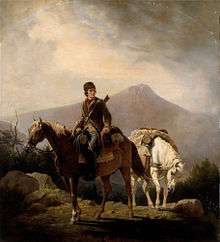 The end of King George's War in 1748 left control of the territory between the Appalachian Mountains and the Mississippi River in dispute. The French wanted the region to connect their holdings in Canada with New Orleans, and the British sought to establish a foothold in the Ohio Valley. The maneuvers of French commander Pierre-Joseph Celoron de Blainville in 1749 discouraged English trade west of the Appalachians, although English speculators remained interested in the region. Walker's 1750 expedition briefly explored what is now southeastern Kentucky, and explorer Christopher Gist managed to reach the mouth of the Kentucky River in 1751.[15] In the opening years of the French and Indian War, the French gained control of the Ohio Valley with the defeat of George Washington at Fort Necessity. With the fall of Fort Duquesne and the construction of Fort Pitt in 1758, however, the French were forced to evacuate the region. The French departure and a relative state of peace with the Cherokee during the same period opened up the region to English explorers and hunters.[16]

John and Samuel Pringle, two deserters from Fort Pitt, spent much of the early 1760s hunting in the Tygart Valley and likely ranged into what is now Kentucky. Part of Elisha Walden's 1761 party hunted along the Rockcastle River from their station camp in southwestern Virginia. In 1767, an expedition led by James Harrod and Michael Holsteiner (Michael Stoner) crossed Kentucky from north-to-south, reaching the Nashville area several weeks after departing from the Illinois Country. Around the same time, an expedition led by Benjamin Cutbirth crossed Cumberland Gap and pushed all the way to the Mississippi River, where they shipped the pelts they had collected down to New Orleans.[17]

In 1768, an English explorer named John Finley passed through the Yadkin Valley and visited Daniel Boone, with whom he had served in the French and Indian War. Finley told Boone of the natural splendor of Kentucky's Bluegrass region, which he had visited as a merchant before the French and Indian War. The following year, the two led an expedition into Kentucky, traveling up the Rockcastle River and establishing a station camp at Red Lick Fork. While Boone and a companion named John Stuart were hunting along the Kentucky River, they were captured by the Shawnee, and their pelts were confiscated. They returned to their station camp to find it plundered, and learned that Finley and the rest of the expedition had returned to North Carolina. Undeterred, Boone and Stuart continued hunting in the region. Boone was later joined by his brother, Squire, and the Boone brothers remained in the Kentucky wilderness until 1771. Although they again had their pelts confiscated when they were intercepted by the Cherokee at Cumberland Gap, the Boones were nevertheless eager to return to settle in the region.[18] Daniel Boone's vivid accounts of his hunting exploits helped draw a flood of settlers to Kentucky in subsequent years.

Numerous natural and political entities in Kentucky bear the names of long hunters, including Boone County and Boonesborough, named for Daniel Boone, and Harrodsburg, named for James Harrod. Kenton County is named for Simon Kenton, who, believing he was a fugitive, spent the mid-1770s hunting in eastern Kentucky. Long hunter James Knox named the Dix River after Cherokee leader Captain Dick, who gave Knox permission to hunt along the river in 1770.[19] The U.S. government established Daniel Boone National Forest in 1937 in the eastern part of the state.