The Kentucky River is a tributary of the Ohio River, 260 miles (418 km) long,[1] in the U.S. Commonwealth of Kentucky. The river and its tributaries drain much of the central region of the state, with its upper course passing through the coal-mining regions of the Cumberland Mountains, and its lower course passing through the Bluegrass region in the north central part of the state. Its watershed encompasses about 7,000 square miles (18,000 km2). It supplies drinking water to about one-sixth of the population of the Commonwealth of Kentucky.

The river is no longer navigable above Lock 4 at Frankfort. Concrete bulkheads have been poured behind the upper lock gates of Locks 5-14 to strengthen the weakest link in the dam structures. All 14 dams are now under the management of the state-run Kentucky River Authority. The primary importance of the locks today is to maintain a pool that allows the city of Lexington to draw its drinking water from the river. Despite the fact that the Lexington area receives well over 40 inches (1,000 mm) of precipitation annually, the limestone, karst geology of that area means that surprisingly little natural surface water is found in the region.

Winchester, Beattyville, Irvine, Richmond, Lancaster, Nicholasville, Harrodsburg, Wilmore, Versailles, Lawrenceburg, and Frankfort also draw water from the river for their municipal water supplies. It is estimated that over 700,000 people depend on the river for water. 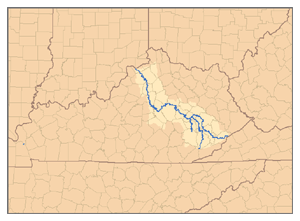 The Kentucky River is formed in eastern Kentucky at Beattyville, in Lee County, by the confluence of the North, Middle and South Forks at about 670 feet (200 m) elevation, and flows generally northwest, in a highly meandering course through the mountains, through the Daniel Boone National Forest, then past Irvine and Boonesborough, then southwest, passing south of Lexington, then north through Frankfort. It joins the Ohio at Carrollton.

Between Clays Ferry in Madison County and Frankfort, the river passes through the Kentucky River Palisades, a series of dramatic steep gorges approximately 100 miles (160 km) in length.

It continues on until it flows into the Ohio River at Carrollton in Carroll County. 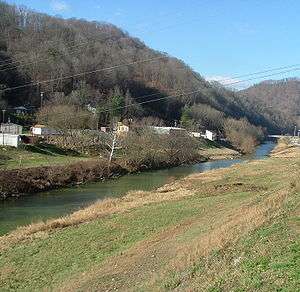 The North Fork near Combs.

The North Fork Kentucky River is approximately 168 miles (270 km) long.[1] It rises on the western side of Pine Mountain, in the Appalachians of extreme southeastern Kentucky, in eastern Letcher County near the Virginia state line in Payne Gap, near the intersection of US 23 and US 119. It flows generally northwest, in a winding course through the mountainous Cumberland Plateau, past Whitesburg, Hazard and Jackson. It receives Rockhouse Creek at Blackey near its source. Approximately 8 miles (13 km) southeast of Hazard, it receives the Carr Fork. It receives Troublesome Creek at Haddix, southeast of Jackson. Three miles upstream from its confluence with the South Fork, it receives the Middle Fork. It joins the South Fork to form the Kentucky at Beattyville.

The Middle Fork Kentucky River is a tributary of the North Fork Kentucky River, approximately 105 miles (169 km) long,[1] in southeastern Kentucky. It rises in the Appalachian Mountains in southernmost Leslie County, approximately 16 miles (26 km) from the Virginia state line, and flows north through the Cumberland Plateau past Hyden. At Buckhorn, it is impounded to form the Buckhorn Lake reservoir. North of the reservoir it flows generally northwest and joins the North Fork in Lee County, approximately 5 miles (8 km) east of the confluence of the North and South forks at Beattyville.

The South Fork Kentucky River is approximately 45 miles (72 km) long.[1] It is formed in Clay County, at the town of Oneida in the Daniel Boone National Forest, approximately 10 miles (16 km) northeast of Manchester, by the confluence of Goose Creek and the Red Bird River. It flows generally north in a highly meandering course through the mountainous Cumberland Plateau region. It joins the North Fork to form the Kentucky at Beattyville.