Louisville is a city in Winston County, Mississippi. The population was 7,006 at the 2000 census. It is the county seat of Winston County.[1]

Like Winston County, Louisville is named for Louis Winston (1784–1824), a colonel in the militia, a prominent lawyer, and a judge of the Mississippi Supreme Court.[2]

The town is pronounced by the locals as "Lewis-vull".

There were 2,641 households out of which 34.3% had children under the age of 18 living with them, 40.4% were married couples living together, 25.0% had a female householder with no husband present, and 31.2% were non-families. 28.2% of all households were made up of individuals and 14.4% had someone living alone who was 65 years of age or older. The average household size was 2.55 and the average family size was 3.12.

The City of Louisville is served by the Louisville Municipal School District. Private schools in Louisville include Winston Academy and Grace Christian School. 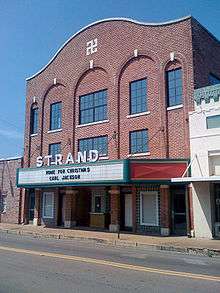 The historic Strand Theatre in downtown Louisville; note that the Swastika incorporated into the building's facade is decorative rather than political, as the theatre antedates the Nazi era.

The American Heritage "Big Red" Fire Museum is located in Louisville. This museum features a collection of restored antique fire equipment and fire engines.[7] The Strand Theatre, in downtown Louisville, is an historic movie theater which now serves as an art and music venue. Louisville native Carl Jackson plays an annual Christmas concert at the theater to raise money for the building's restoration.[8]

Mississippi Highway 14 enters east from the Alabama state line through Macon and when it enters in Louisville it is also known as Main Street. It leaves westbound eventually traveling to the Mississippi River where it ends.

Mississippi Highway 15 enters from the north from Ackerman, MS, then meets up with Mississippi Highway 25 just north of Louisville. M.S. 25 enters from the north from Starkville. M.S. 15 and 25 travel together along the western side of town. At the southern edge of town they separate: M.S. 15 traveling to Philadelphia & Interstate 20; and M.S. 25 to Jackson.