Luca Paolini (born 17 January 1977 in Milan) is an Italian road bicycle racer who has been professionally riding since 2000. He started his sports career in the early 2000s by joining Mapei–Quick-Step (2000–2002), UCI ProTeam directed by Patrick Lefevere. Within Mapei-Quick Step and then its successor team Quick-Step–Innergetic (2003–2005), Luca Paolini achieved several victories. Among them were first places at Gran Premio di Lugano, Giro del Piemonte and Gran Premio Bruno Beghelli. He has also won stages at Tour of Britain and Tour de Wallonie. 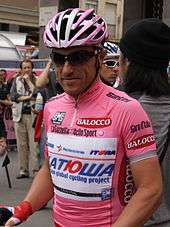 Paolini in the Maglia Rosa at the 2013 Giro d'Italia

Seasons 2006–2007 and 2008–2010 Luca Paolini spent in two Italian cycling team – Liquigas and Acqua & Sapone respectively. As their member, he triumphed at certain stages of Vuelta a España and Three Days of De Panne, won one-day races Gran Premio Città di Camaiore, Trofeo Laigueglia, Coppa Placci as well as Coppa Bernocchi. Meanwhile, his bright victories attracted a particular attention from anti-doping bodies. As his name appeared in taped phone conversations together with Ivan Basso and his sister Elisa, he was suspected in illegal drugs usage.[1] In September 2006 Paolini's home was searched in a doping investigation which was called Operazione Athena[2] – however it appears that no evidence was found that led to any conviction of Paolini's fault, so Team Liquigas refused to suspend him.[3]

In 2011, he was signed by Russian Team Katusha to be a domestique for Filippo Pozzato both at classics and Grand Tours. However, due to Pozzato's poor performance and traumas in season 2011, he switched to other co-riders and pursued his personal goals in the peloton. In autumn 2011 he finished third at Giro del Piemonte having taken his first podium for Team Katusha.[4] In 2013, Paolini took the Omloop Het Nieuwsblad after breaking away from the leading group with Omega Pharma–Quick-Step's Stijn Vandenbergh. The pair resisted and Paolini won the sprint after Vandenburgh took long pulls in the final kilometers.[5] In Milan – San Remo, Paolini finished in the lead group in fifth position, as MTN–Qhubeka's Gerald Ciolek won the race.[6]

In 2015, Paolini won a very windy and difficult edition of Gent–Wevelgem, as only 39 riders out of 160 finished the race. Paolini attacked his breakaway companions with five kilometers to go and benefited from a disorganized chase to win solo.[7] In May, it was announced that Paolini's contract with Katusha had been extended by a year, finishing at the end of 2016.[8]

In the 2015 Tour de France, Paolini tested positive for cocaine and was thrown out of the race after Stage 7.[9] His contract with Katusha was nullified. He revealed that he had been suffering from an addiction to the sleeping drug Benzodiazepine and claimed to have taken cocaine "at a low point in his life".

In April 2016, he was banned from competition for 18 months, with the UCI judging that he had not intended to breach the anti-doping rules, as they do not prohibit the use of cocaine outside competition. Katusha confirmed that he would not be able to return to the team.[10]