In this Indian name, the name "Ponnuswamy" is a patronymic, not a family name, and the person should be referred to by the given name, "Sivagnanam".

Mylapore Ponnuswamy Sivagnanam (Ma.Po.Si) was a Veteran Tamil Scholar and the Champion of Tamil Language and Culture.Ma.Po.Si was an example of self-made leader, an embodiment of whatever is noble and great in Tamil tradition and culture. He belonged to a rare group of eminent personalities who, having had no formal education worth the name in a background of poverty and lack of social status, have risen. By dint of sheer self-effort to an exalted position

.Ma.Po.Si was born in the Gramani community and overwhelming all odds,achieved distinction, as an eminent Tamil Scholar, a prolific writer, a silver tongued and persuasive orator who could hold spell bound the masses as well as classes, a true nationalist, with the seal of recognition earned through stints in jail for his activities in pursuance of the struggle for national independence.

A Gandhian, an educationalist, and protagonist of state autonomy without being a secessionist, and a crusader for a pre-eminent place for Tamil at all levels in education and the administration.

Ma.Po.Si was a multi-faceted personality, a humanist with a cultivated taste for the Tamil Classic tradition. As a dedicated leader of Tamils, Ma.Po.Si gained recognition from the prince and the peasant alike.Ma.Po.Si with no formal education to his credit, was able to earn the honour of being conferred a doctorate.

Ma.Po.Si was born on 26 June 1906 of humble parentage in Salvankuppam in Thousand Lights of Madras City, to God –fearing Parents, Ponnuswamy and Sivagami,belonging to the Gramani Community, a counterpart of the Nadars of the Southern Districts.For long, Sivagnanam was known as Sivagnanam Gramani, which denominational suffix he shed later.His early education was through his devout mother, and his school term ended at the commencement of Standard III, due to poverty, his father could not buy for him the class text books. Thereafter, the wide world was his school. Sivagnanam was the eldest of the surviving three of his parents’ ten children. Sivagnanam worked on daily wage for some time and later as a weaver for eight years.Subsequently, he started life as a compositor in the Press of a Tamil Journal.

He was elected to the Tamil Nadu Legislative Assembly from Thiyagarayanagar constituency contesting as a DMK contestant in 1967.[3] His participation in the demarcation of Tamil Nadu has made him an important figure in the state’s history. It was through his efforts the state could retain Madras(now renamed as Chennai) and got Tiruttani from Andhra Pradesh (due to his the namade vs manade agitation) . He was the chairman (presiding officer) of Tamil Nadu Legislative Council when it was abolished by M. G. Ramachandran in 1986.[2] 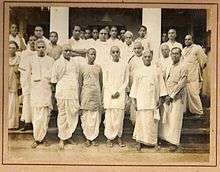 Potti Sreeramulu started an agitation for separate Andhra Pradesh. As part of this 'Madras Manade' movement was started, asking for Madras to be the capital of separated Andhra Pradesh. Ma.Po.Si through his Tamil Arasu Kazhagam agitated against Telugus' claim organising rallies, meetings and dharnas etc., saying தலை கொடுத்தேனும் தலைநகரைக் காப்போம் (We will protect and save the capital for Tamils even if we have to part with our heads). Leaders like C. Rajagopalachari supported Ma.Po.Si.[4] [5]

Ma.Po.Si went to meet Sreeramulu during his fast, due to the high respect he had on him, amidst political differences.Andhra Kesari Prakasam who was with Sreeramulu told Ma.Po.Si that they want to keep Madras as their temporary capital. Ma.Po.Si denied his request. Ma.Po.Si through his Tamilasrasu Kazhagam held massive protests for want of Madras within Tamil Nadu.He was even prisoned at times for this. Sreeramulu died during a fatal fast,which increased more sympathy towards Andhra's demand.'Madras Manade ' movement attained more momentum.[4] [5]

Nehru appointed Vansu, a Rajasthan-based justice to look into the Madras issue. Rajaji pressured Nehru saying if Madras was given to Andhra, he will resign from his post. Ma.Po.Si submitted historical,literature facts to Vansu explaining the reason why he claims Thiruthani, Thirupathi,Madras to be grouped within Tamil Nadu. In between Nehru got an opportunity to read the famous speech Ma.Po.Si rendered in Madras Corporation. Two thousand telegrams were sent to Nehru from Tamil Nadu, emphasizing the need for Madras within Tamil Nadu. Finally Madras was attached to Tamil Nadu by the great efforts of Ma.Po.SI.But Tirupati only left[4] [5]

During the British period the Madras Corporation flag had the ‘sea,boat ,3 lions and 2 fish’.The 3 lions represented the British and the sea,boat,fish denoted the seashore of madras.After Independence the need for changing the flag arose. M.P.Sivagnanam who was heading the education wing of the corporation suggested the Pandiya,Chola,Chera’s symbol ‘Fish,Tiger and Bow’ (which he already had in his ‘Tamil arasu kazhagam’s flag). Rajaji agreed with his suggestion.[6]

He started reading Silapathikaram and got induced into it.He took the morals dictated by Silapathikaram as his bible ad enforced his party's principles based on the same.He was the one, who pioneered spreading the merits of Silapathikaram. Ma.Po.Si’s extensive research on Silapathikaram earned him the special title "Silambu Chelvar" by R. P. Sethu Pillai. His attraction towards this epic even made him name his daughters Kannagi and Madhavi.

After Ma.Po.Si's demise, his daughter Ma.Po.Si Madhavi Baskeran started celebrating Silapathigara Vizha in 2013,through a Trust run by her in the name of her father.[7]

Ma.Po.Si was instrumental in reviving the public interest of Kattabomman through his biography he wrote.Later a Tamil movie named 'Veerapandiya Kattabomman (film)' was made which made Kattaboman more popular.Ma.Po.Si wrote the screenplay for this movie.

Books written by Ma.Po.Si on Thiruvalluvar

Books of Ma.Po.Si translated in English

He was the editor of "Senkol" which became the vehicle of his ideas on matters of political and literary.

In 1966, he was awarded the Sahitya Akademi Award for Tamil for his biography of Vallalar - Vallalar kanda orumaipaadu.[8] In 1972 Government of India awarded him Padma Shri for Literature & Education.[1]

Chairman of several committees, commissions constituted by the Madras University .

Delivered convocation Address in the University of Madras

1972-74 Member, Tamil Nadu State Local Library Authority Responsible for the creation of separate department and Director for Librariesin Tamil Nadu and also for increasing the Library Cess from 3 paise to 5 paise.

1986 Visited London and United States of America for over three weeks.Toured various places in America and participated in World Peace Conference in Virginia 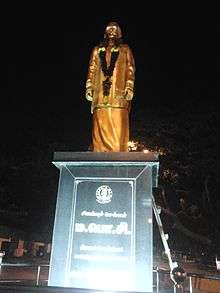 1970 Award given by UNESCO Mandram, Madras during International Education Year

1972 ‘Padmashri’ Award by the President of India

1979 “Doctor of Literature” by the University of Madras

1979 “Doctor of Literature” by the Annamalai University, Chidambaram, Tamil Nadu

1980 Tamil Nadu Government has awarded a prize for the book written by his namely,"Enathu Porattam" containing 1200 pages. This book wasreleased by the President of India Thiru. V.V.Giri.

2006 Books of Ma.Po.Si Nationalized by the Tamil Nadu Government.