Ponneelan (Tamil: பொன்னீலன், born. 1940 at Manikatti Pottal, Kanyakumari district)[1] is the pen name of Kandeswara Bhaktavatsalan, a Tamil writer from Tamil Nadu, India.[2][3][4] He is a Marxist and was influenced by Tamil Communist leader P. Jeevanandham in his younger days. He became a teacher and eventually retired as the deputy director of school education for Tamil Nadu.[5] He won the 1994 Sahitya Akademi Award for Tamil his novel Pudhiya Dharisanangal.[6][7] He is currently the state president of the Tamil literary organisation Tamil Nadu Kalai Ilakkiya Perumandram. During 2005-2008, he was a member of the Central Board of Film Certification (censor board).[8][9] He also wrote the script for the 2008 film Ayyavazhi.[10] 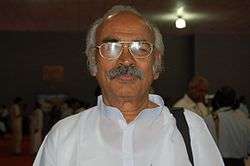