This article is about the occupation. For the film, see The Machinist.

A machinist is a person who uses machine tools to make or modify parts, primarily metal parts. This process of machining is accomplished by using machine tools to cut away excess material much as a woodcarver cuts away excess wood to produce his work. In addition to metal, the parts may be made of many other kinds of materials, such as plastic or wood products. The goal of these cutting operations is to produce a part that conforms to a set of specifications, or tolerances, usually in the form of engineering drawings commonly known as blueprints.

Within the title machinist are other specialty titles that refer to specific skills that may be more highly developed to meet the needs of a particular job position. Some examples of these specialty titles are fitter, turning hand, mill hand, and grinder. Also, there are titles that are related but actually are a further development of machinist skills such as tool and die maker, tool maker, trim die maker, die sinker, patternmaker and mold maker. These latter titles are also more commonly found in specialized areas of industry.

A fitter and turner refers to a person who manufactures mechanical parts (turner) and assembles (fitter) those parts together to manufacture a mechanical device.

The role of the machinist in manufacturing

A machinist is usually called upon when a part needs to be produced from a material by cutting. Such a part may be unique or may be needed in the thousands. This could include a machinery part for a production line or anything that can be made from metal or plastic. Producing a part will often require several steps and more than one machine tool. Each machine tool plays a specific role in cutting away excess material. When large numbers of parts are needed, production planning is required to plan the most logical workflow through a series of machines. Computer numerical controlled (CNC) machines are a special computer-driven tool that can machine a large variety of shapes, and whose use in the workflow depends on the part to be machined.[1]

CNC machines are becoming the standard due to their speed, precision, flexibility, and reduced downtime while changing jobs. Production runs consisting of large numbers of parts are more cost effective (in a local and narrow sense) and commonly referred to as production work in the trade. Conversely, small production runs are sometimes referred to as prototype or jobbing work.

Production engineers use blueprints and engineering drawings to produce detailed specifications of the part, especially its geometry (shape), then decide on a strategy to make it. Machine tools are then configured by the machinist or toolsetter and production commences. The machinist works with the quality department to ensure the specifications are maintained in the finished product.[1] 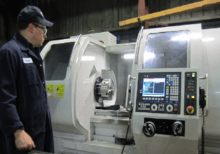 Large commercial organizations often staff machinists on site in a maintenance mode to ensure continuing operations of the production machinery. The labor cost for this role is significantly lower than costs involved with production shutdowns.

A machinist is to metal as a woodcarver is to wood. The most common materials that machinists make parts from are steel, aluminium, brass, copper, and various alloys of these materials. Other less common materials such as vanadium, zinc, lead, or manganese are often used as alloying elements for the most common materials. Materials that machinists work with occasionally are plastics, rubber, glass, and wood products. Rarely, machinists also work with exotic and refractory metals. The term exotic metals is a general term describing out of the ordinary, rare or special purpose metals. A synonym might be space-age. A list of exotic metals might include, but is not limited to, titanium, beryllium, vanadium, chromium, molybdenum and tungsten, as well as special high-temperature metal alloys like Inconel or Hastelloy (sometimes called superalloys). Very often the meaning of the term suggests the need for specialised handling and/or tooling to machine them effectively.[2]

Machinists usually work to very small tolerances, usually within 0.010" or 0.25 mm (more commonly expressed as ±0.010"(Plus or minus ten-thousandths of an inch) or ±0.13 mm), and sometimes at tolerances as low as 0.0001" (plus or minus one tenth of a thousandth of an inch – or 0.0025 mm) for specialty operations. A machinist deals with all facets of shaping, cutting and some aspects of forming metal, although forming is typically a separate trade. The operations most commonly performed by machinists are milling, drilling, turning, and grinding. There are other more specialised operations that a machinist will less frequently be called upon to perform such as honing, keyseating, lapping, and polishing, to name a few.

Tools of the machinist

The tools that a machinist is expected to be proficient with fall into 6 broad categories: