Peshwa Madhav Rao II (18 April 1774 – 27 October 1795) (aka Sawai Madhavrao Peshwa or Madhav Rao II Narayan) was Peshwa of the Maratha Empire in India, from his infancy. He was known as Sawai Madhav Rao or Madhav Rao Narayan. He was the posthumous son of Narayanrao Peshwa, murdered in 1773 on the orders of Raghunathrao. Madhavrao was considered the legal heir, and was installed as Peshwa by the Treaty of Salbai[1] in 1782.

Madhavrao was the Posthumous son of Peshwa Narayanrao by his wife, Gangabai. After Narayanrao's murder, Raghunathrao became Peshwa but was soon deposed by the courtiers and knights of the Maratha Empire. They instead installed Gangabai's new born son, Madhavrao II, as the Peshwa with the courtiers themselves, led by Nana Fadnavis, as the Regents.He was made Peshawa when he was barely 40 days. His time in power was dominated by the political intrigues of Nana.[2]

Madhavrao was fond of out-doors and had a private collection of exotic animals such as lions and Rhinoceros close to where the later Peshwe park zoo in Pune was situated,.He was particularly fond of his herd of trained dancing deer.[3]

Madhavrao committed suicide at the age of 21 by jumping off from the high walls of the Shaniwar Wada in Pune.[4] 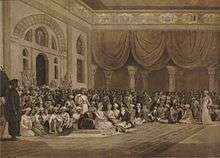 A Representation of the delivery of the Ratified Treaty of 1790 by Sir Chas Warre Malet Bart to His Highness Soneae Peshwa, in full Durbar or Court as held upon that occasion at Poonah in the East Indies on 6 July 1790