All the Peshwas during the rule of Chatrapati Shivaji and Chatrapati Sambhaji belonged to Deshastha Brahmin family.[1] The first Peshwa was Moropant Pingle, who was appointed as the head of the Ashta Pradhan (council of eight ministers) by Chatrapati Shivaji, the founder of the Maratha Empire. The initial Peshwas were all ministers who served as the chief executives to the king. The later Peshwas held the highest administrative office and also controlled the Maratha confederacy. Under the Chitpavan Brahmin Bhat family, the Peshwas became the de facto hereditary administrators of the Confederacy. The Peshwa's office was most powerful under Baji Rao I (r. 1720-1740). Under Peshwa administration and with the support of several key generals and diplomats, the Maratha Empire reached its zenith, ruling most of the Indian subcontinent. However, after the Peshwa Raghunathrao allied with the British, the Peshwa's power declined substantially. The subsequent Peshwas were titular leaders and were responsible for the downfall of Maratha empire due to inefficiency in handling the affairs of the state. Later on many provinces were controlled and administered either by the Maratha nobles such as Daulat Rao Sindhia, or by the East India Company. During this period, the Maratha confederacy came to its end through its formal annexation into the British Empire in 1818.

The word Peshwa is from Persian پیشوا pēshwā, meaning "foremost, leader".[2] After coronation of Shivaji Maharaj in 1674, he appointed Moropant Trimbak Pingle[3] as the first Peshwa. Shivaji Maharaj renamed this designation as Pantpradhan in 1674 but this term is less commonly used. Today, the surname "Peshwe" (alternatively "Peshave") or "Peshwa" is found both among Chitpavans (tracing descent to the (Bhat) Deshmukh clan, notably Bajirao I), Deshasthas (tracing descent to Moropant Pingle, Sonopant Dabir and a certain clan from Jejuri, Pune), as well as some Maratha (Kshatriya) families of Vidarbha (by titulary heritage).

They were also known as kings.

The first Peshwa was Moropant Trimbak Pingale. His son, Nilopant Pingale, also served as Peshwa after his father's death in 1683.

The second Peshwa, Ramchandra Amatya (né Ramachandra Nilkanth Pant), received royal status from Chhatrapati Rajaram as "Hukumatpanha" from 1689 to 1699. He was a sound administrator who rose from the level of a local Kulkarni to the ranks of Ashtapradhan due to guidance and support from Shivaji. Amatya is a Sanskrit term denoting counselor, guide, supervisor or overseer of both personal and governmental affairs.

He recaptured many forts from the Mughals between 1690 and 1694, some in person, as well as personally conducting guerilla war techniques. When Chhatrapati Rajaram fled to Jinji in 1689, before leaving from Maharashtra, he gave "Hukumat panha" (King Status) to Pant. Ramchandra Pant managed the entire state under many challenges such as the Mughal influx, the betrayal of Vatandars, and scarcity of food. With his help, Sachiv kept the Maratha State on a sound economic footing. Pant got tremendous military help from Santaji Ghorpade and Dhanaji Jadhav, the great Maratha warriors. Many times he directly participated in war, especially during 1689–1695; he personally re-captured many forts in south Maharashtra from the Mughuls and played a role of shadow king in the absence of Chatrapati Rajaram.

In 1698, he happily stepped down from the post of "Hukumatpanha" and Rajaram offered this post to his wife Tarabai. Tarabai gave an important position to Pant in the senior administration of Maratha State. He wrote a book called Adnyapatra मराठी: आज्ञापत्र which explained different techniques of war, maintenance of forts and administration etc.

The concepts in Adnyapatra and the wisdom and leadership of Tararani (Tarabai) greatly helped the Maratha empire in building the foundation of state. As he was more loyal to Tararani than Shahu, he was sidelined after the arrival of Chhattrapati Shahu. Later, the Peshwa post was given to Balaji Vishwanath in 1713. Ramchandra Pant died in 1716 on Panhala fort.

Parshuram Trimbak Kulkarni was born in a Deshastha Yajurvedi Brahmin ( देशस्थ यजुर्वेदी ब्राम्हण ) family and held the post of Pantpratinidhi. Later on, he became the Jagirdar of Aundh State. He was instrumental in holding the fort Panhala against Aurangzeb (1689). Though he lost the fort then, he recaptured it in 1692. He also captured territories between Miraj and fort Rangana and also Bhudargad, Chandangad, Pavangad, Satara and Vasantgad. He continued his loyalty towards Tarabai much to the chagrin of Shahu. Shahu imprisoned him twice between 1710-14. 14 (second time when his son Krishnaji joined the forces of Sammbhaji II). But his life was spared by Shahu because of the intervention of Khando Ballal (Shahu's personal assistant) who reminded his king of Parshuram Trimbak's contribution to the Maratha cause. Parshuram Trimbak continued holding the position of Pant Pratinidhi in the time of Tarabai until his death in 1718. He was a devotee of Yamai Devi of Aundh and had composed poems praising her might. He was succeeded by his son Shrinivasrao, aka Shripatrao, who continued albeit as the feudatory jagirdar (Aundh) of Shahu's. 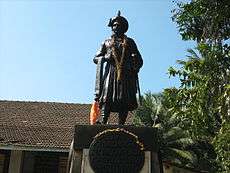 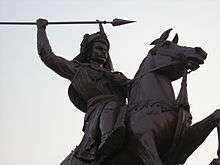 The position moved to the Chitpavan Brahmin Bhat family of Shrivardhan in the Konkan region, upon appointment of Balaji Vishwanath (Bhat) as Peshwa by the fourth Chattrapati Shahu in 1713. The appointment of his son, Baji Rao I, as Peshwa in 1719 by Shahu made the position hereditary in the Bhat family. Baji Rao proved his loyalty and patriotism by controlling the feudal chieftains who wanted independence from the Maratha Empire. The rebellion of General Trimbak Rao Dabhade, the senapati (commander in chief), over Chauthai (revenue collection) of Gujarat is one example of such internal Maratha feuds. The followers of Baji and Trimbak clashed at the Battle of Bilhapur on April 1, 1731, and Trimbak was killed. In gratitude, Shahu gave the Peshwas and the Bhat family unchallenged control over Maratha empire.[4] The victory in war of succession with Tara Bai led to Shahu becoming Chhatrapati.. Shahu, who also appointed Baji Rao's son as Peshwa in 1740, gave considerable authority to the Peshwas to command the Maratha armies, and they responded well during his reigns.

At the time of his death in 1749, Shahu made the Peshwas his successors under these conditions: Shivaji's descendants, who remained as the titular Raja of Satara, were called Swami (Marathi for the 'real owner') by the Peshwas who reported to them, and officially they were to seek guidance from the Raja. However, the Peshwa also became a ceremonial head of state after the battle of Panipat and the death of Madhavrao.

The first Peshwa to receive the status of a pantpradhan was Ramchandra Pant Amatya Bawdekar in 1689 by Chatrapati Rajaram. The first (Bhat) Deshmukh family Peshwa was Balaji Vishwanath (Bhat) Deshmukh. He was succeeded as Peshwa by his son Baji Rao I, who never lost a battle. Baji Rao and his son, Balaji Baji Rao, oversaw the period of greatest[5] Maratha expansion, brought to an end by the Marathas' defeat by an Afghan army at the Third Battle of Panipat in 1761. The last Peshwa, Baji Rao II, was defeated by the British East India Company in the Battle of Khadki which was a part of Third Anglo-Maratha War (1817–1818). The Peshwa's land (Peshwai) was annexed to the British East India Company's Bombay province, and the Bajirao II, the Peshwa was pensioned off.

Notable Generals and Diplomats of Peshwas 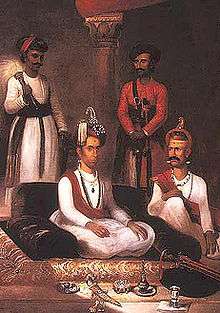 His Highness Shrimant Sawai Madhavrao Peshwa or Madhav Rao II Narayan and his ministers at Pune. 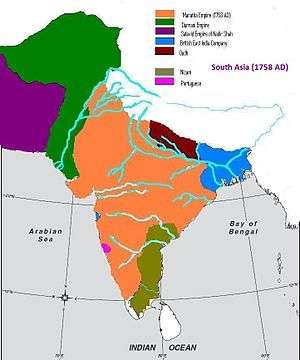