After the death of Madhavrao Peshwa in 1772, his brother Narayanrao became Peshwa of the Maratha Empire. However, Raghunathrao, Narayanrao's uncle, had his nephew assassinated in a palace conspiracy that resulted in Raghunathrao becoming Peshwa, although he was not the legal heir.

Narayanrao's widow, Gangabai, gave birth to a posthumous son, who was legal heir to the throne. The newborn infant was named 'Sawai' Madhavrao (Sawai means "One and a Quarter"). Twelve Maratha chiefs, led by Nana Phadnavis directed an effort to name the infant as the new Peshwa and rule under him as regents.

Raghunathrao, unwilling to give up his position of power, sought help from the British at Bombay and signed the Treaty of Surat on 6 March 1775. According to the treaty, Raghunathrao ceded the territories of Salsette and Bassein to the British, along with part of the revenues from Surat and Bharuch districts. In return, the British promised to provide Raghunathrao with 2,500 soldiers.

The British Calcutta Council condemned the Treaty of Surat, sending Colonel Upton to Pune to annul it and make a new treaty with the regency. The Treaty of Purandhar (1 March 1776) annulled that of Surat, Raghunathrao was pensioned and his cause abandoned, but the revenues of Salsette and Broach districts were retained by the British. The Bombay government rejected this new treaty and gave refuge to Raghunathrao. In 1777 Nana Phadnavis violated the treaty with the Calcutta Council by granting the French a port on the west coast. The British replied by sending a force towards Pune. The tangle was increased by the support of the London authorities for Bombay, which in 1778–79 again supported Raghunathrao. Peace was finally restored in 1782.

The British occupied Salsette Island, Thana Fort, Fort Versova, and the island fort of Karanja in 1774.[4]

British troops under the command of Colonel Keating left Surat on March 15, 1775 for Pune. But they were checked by Haripant Phadke at Adas and were totally defeated on May 18, 1775.[5] Casualties for Keating's force, accompanied by Raghunathrao, included 96 killed. The Marathas casualties in the Battle of Adas (Gujarat) included 150 killed.[4]

Warren Hastings estimated that direct actions against Pune would be detrimental. Therefore, the Supreme Council of Bengal condemned the Treaty of Surat, sending Colonel Upton to Pune to annul it and make a new treaty with the regency. An agreement between Upton and the ministers of Pune called Treaty of Purandar was signed on March 1, 1776.

The Treaty of Purandhar (1 March 1776) annulled that of Surat, Raghunath Rao was pensioned and his cause abandoned, but the revenues of Salsette and Broach districts were retained by the British.

Following a treaty between France and the Poona Government in 1776, the Bombay Government decided to invade and reinstate Raghoba. They sent a force under Col. Egerton reached Khopoli and made its way through the Western Ghats at Bhor Ghat and onwards toward Karla, which was reached on 4 Jan. 1779 while under Maratha attacks. Finally the British were forced to retreat back to Wadgaon, but were soon surrounded. The British were forced to sign the Treaty of Wadgaon on 16 Jan. 1779, a victory for the Marathas.[6]

Reinforcements from northern India, commanded by Colonel (later General) Thomas Wyndham Goddard, arrived too late to save the Bombay force. The British Governor-General in Bengal, Warren Hastings, rejected the treaty on the grounds that the Bombay officials had no legal power to sign it, and ordered Goddard to secure British interests in the area.

Goddard with 6,000 troops stormed Bhadra Fort and captured Ahmedabad on February 15, 1779. There was a garrison of 6,000 Arab and Sindhi infantry and 2,000 horses. Losses in the fight totalled 108, including two British.[7][8][9] Goddard also captured Bassein on December 11, 1780. Another Bengal detachment led by Captain Popham captured Gwalior and assisted by the Rana of Gohad, captured Gwalior on August 4, 1780, before Mahadji Scindia could make preparations. Skirmishes took place between Mahadji Scindia and General Goddard in Gujarat, but indecisively. Hastings sent yet another force to harass Mahadji Shinde, commanded by Major Camac.[10]

Central India and the Deccan 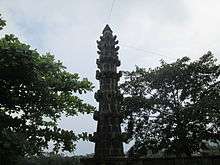 A Vijay Stambh (Victory Pillar) erected to commemorate Maratha victory over British. The pillar is located at Vadgaon/Wadgaon Maval, close to the city of Pune, India 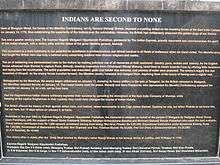 An information plaque describing the Maratha victory over British. The plaque is located at Vadgaon/Wadgaon Maval, close to the city of Pune, India

After capturing Bassein, Goddard marched towards Pune. But he was routed at Borghat – Parshurambha in April 1781 by Haripant Phadke and Tukoji Holkar.

In central India, Mahadji stationed himself at Malwa to challenge Camac. Initially, Mahadji had an upper hand and British forces under Camac, being harassed and reduced, had to retreat to Hadur.[11]

In February 1781 the British beat Shinde to the town of Sipri,[12] but every move they made after that was shadowed by his much larger army, and their supplies were cut off, until they made a desperate night raid in late March, capturing not only supplies, but even guns and elephants.[13] Thereafter, the military threat from Shinde's forces to the British was much reduced.

The contest was equally balanced now. Where Mahadji scored a significant victory over Camac at Sironj,[14] the latter avenged the loss through the Battle of Durdah [15] on March 24, 1781.

Colonel Murre arrived with fresh forces in April, 1781 to assist Popham and Camac. After his defeat at Sipri, Mahadji Scindia got alarmed. Finally, he decisively crushed the forces of Murre on July 1, 1781. Mahadji seemed to be too powerful to be defeated now.

This treaty, known as the Treaty of Salbai, was signed on 17 May 1782, and was ratified by Hastings in June 1782 and by Nana Phadnavis in February 1783. The treaty ended the First Anglo-Maratha War.[16]