The Second Anglo-Maratha War (1803–1805) was the second conflict between the British East India Company and the Maratha Empire in India.

The English had supported the "fugitive" Peshwa Raghunathrao in the First Anglo-Maratha War, continued with his "fugitive" son, Baji Rao II. Though not as martial in his courage as his father, the son was "a past master in deceit and intrigue." Coupled with his "cruel streak", Baji Rao II soon invoked the enmity of Malhar Rao Holkar when he had one of Holkar's relatives killed.[2]

In October 1802, Peshwa Baji Rao II was defeated by Yashwantrao Holkar, ruler of Indore, at the Battle of Poona. He fled to British protection, and in December the same year concluded the Treaty of Bassein with the British East India Company, ceding territory for the maintenance of a subsidiary force and agreeing to treaty with no other power. The treaty would become the "death knell of the Maratha Confederacy."[2]

After the fall of Mysore in 1799-1800, the Marathas were the only major power left outside British control in India. The Maratha empire at that time consisted of a confederacy of five major chiefs: the Peshwa at Poona, Gaekwad of Baroda, Scindia of Gwalior, Holkar of Indore, and Bhonsale of Nagpur. The Maratha chiefs were engaged in internal quarrels among themselves. Wellesley had repeatedly offered a subsidiary treaty to the Peshwa and Scindia but Nana Fadnavis refused strongly. However, in 1802 when Holkar defeated the combined armies of Peshwa and Scindia, Peshwa Baji Rao II signed the Subsidiary treaty at Bassein in 1802. 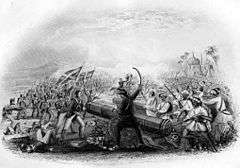 This act on the part of the Peshwa, their nominal overlord, horrified and disgusted the Maratha chieftains; in particular, the Scindia rulers of Gwalior and the Bhonsale rulers of Nagpur and Berar contested the agreement.

In September 1803, Scindia forces lost to Lord Gerard Lake at Delhi and to Lord Arthur Wellesley at Assaye. On 18 October, British forces took the pettah of Asirgarh Fort with a loss of two killed and five wounded. The fort's garrison subsequently surrendered on the 21st after the attackers had erected a battery.[3] British artillery pounded ancient ruins used by Scindia forces as forward operating bases, eroding their control. In November, Lake defeated another Scindia force at Laswari, followed by Wellesley's victory over Bhonsale forces at Argaon (now Adgaon) on 29 November 1803.[4] The Holkar rulers of Indore belatedly joined the fray and compelled the British to make peace. Wellesley, who went on to defeat Napoleon at Waterloo, would later remark that Assaye was tougher than Waterloo.[4]

On December 17, 1803, Raghoji II Bhonsale of Nagpur signed the Treaty of Deogaon[2]:73 in Odisha with the British after the Battle of Argaon and gave up the province of Cuttack (which included Mughalbandi/the coastal part of Odisha, Garjat/the princely states of Odisha, Balasore Port, parts of Midnapore district of West Bengal).

On 30 December 1803, the Daulat Scindia signed the Treaty of Surji-Anjangaon with the British[2]:73 after the Battle of Assaye and Battle of Laswari and ceded to the British Rohtak, Gurgaon, Ganges-Jumna Doab, the Delhi-Agra region, parts of Bundelkhand, Broach, some districts of Gujarat and the fort of Ahmmadnagar.

The British started hostilities against Yashwantrao Holkar on 6 April 1804. The Treaty of Rajghat, signed on 24 December 1805, forced Holkar to give up Tonk, Rampura, and Bundi.[2]:90–96

The second Anglo-Maratha war represents the military high-water mark of the Marathas who posed the last serious opposition to the formation of the British Raj. The real contest for India was never a single decisive battle for the subcontinent. Rather it turned on a complex social and political struggle for control of the South Asian military economy. The victory in 1803 hinged as much on finance, diplomacy, politics and intelligence as it did on battlefield manoeuvre and war itself.[5]

Henty, G. A. (1902). At the Point of the Bayonet: A Tale of the Mahratta War. London.  - historical fiction describing the war