Maluku (Indonesian: Provinsi Maluku) (English: Moluccas) is a province of Indonesia. It comprises the central and southern regions of the Maluku Islands. The main city and capital of Maluku province is Ambon on the small Ambon Island. The province had a population of 1,533,506 at the 2010 Census, and the latest estimate (for January 2014) is 1,708,190.

All the Maluku Islands were part of a single province from 1950 until 1999. In 1999 the northern part of Maluku (then comprising the Maluku Utara Regency, the Halmahera Tengah Regency and the City of Ternate) were split off to form a separate province of North Maluku (Indonesian: Maluku Utara)

The province of Maluku is currently divided into nine regencies (kabupaten) and the two cities (kota) of Ambon and Tual, which form the tenth and eleventh regency-level administrative divisions. The regencies and cities, with their administrative capitals, are listed below with their areas and their populations at the 2010 Census and at the latest (2014) Estimates:

List of major islands and island groups in Maluku 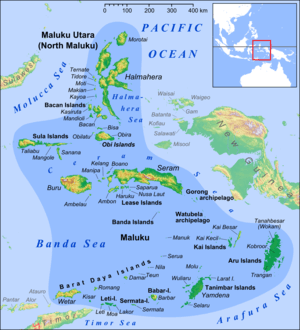 Maluku as the south part of the Maluku Islands