Mapuche flag adopted in 1991, one of the main symbols of the Mapuche movement.

Mapuche conflict is a collective name for the revival and reorganization of Mapuche communities for greater autonomy, recognition of rights and the recovery of land since the Chilean transition to democracy. The Mapuche conflict is a phenomenon mainly from Chile, but also from neighboring areas of Argentina. Demands revolve mainly around three themes: jurisdictional autonomy, return of ancestral lands and cultural identity.[1][2] Historian Gonzalo Vial claims that a "historical debt" exists towards the Mapuche by the Republic of Chile, whereas the Coordinadora Arauco-Malleco aims at a national liberation of Mapuches.[3]

See also: Occupation of Araucanía and Parliament of Coz Coz 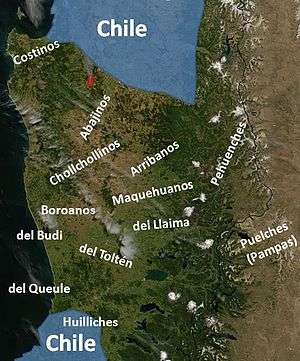 Chilean territory and Mapuche groups in Araucanía in 1860 prior to the occupation of Araucanía.

The Mapuche conflict surfaced in the 1990s following the return of democracy.[4] The conflict started in areas inhabited mostly by Mapuches like the vicinities of Purén, where some indigenous communities have been demanding that certain lands they claim for their own but which are now the property of logging and farming companies and individuals be turned over to them.[5] Several Mapuche organizations are demanding the right of self-recognition in their quality of Indigenous peoples, as recognized under the Declaration on the Rights of Indigenous Peoples by the General Assembly of the United Nations.

The official 2002 Chilean census found 609,000 Chileans identifying themselves as Mapuches.[6] The same survey determined that 35 percent of the nation’s Mapuches think the biggest issue for the government to resolve relates to their ancestral properties.[6]

The building of the Ralco Hydroelectric Plant, Chile's largest hydroelectric power plant, in the 1990s was highly controversial among Mapuches and pro-Mapuche groups as it was to flood allegedly sacred land including one Mapuche cemetery. After compensations were paid the plant was finally finished in 2004.[7]

Demonstration in Santiago, after the killing of two Mapuche activists.

Numerous incidents such as violent land occupations, burning of private property and demonstrations have occurred in Araucania. In the wake of the recent deaths of a few of its activists, Mapuche organization Coordinadora Arauco-Malleco has played a key role by organizing and supporting violent land occupations and other direct actions, such as burning of houses and farms, that have ended up in clashes with the police. The government of Michelle Bachelet has said that it is not ready to contemplate expropriating land in the southern region of Araucania to restore lost ancestral territory to the Mapuche.[8] The government set out to buy land for use by 115 Mapuche communities, however, according to government officials, the current owners have nearly tripled the prices they are demanding. On the other hand, the effectiveness of the government policy of buying and distributing land has been questioned.[8] Two special presidential envoys were sent to southern Chile to review the increasingly fractious “Mapuche situation”.[6]

Mapuches in the 2011 student protests

A march was held in commemoration of the death of Matías Catrileo held in Santiago in January 2013. During the march a group of masked men attacked banks and threw molotov cocktails. Later the same group cause incidents near Estación Mapocho.[9] The commemoration was associated by newspaper La Tercera with the assault and torching of a truck in Chile Route 5 in Araucanía Region.[10] In the morning of January 4, 2013 a landowning business couple died in a fire in their house in Vilcún, Araucanía Region.[11][12] The prosecutor said it was arson in a preliminary report and newspaper La Tercera linked it to the commemoration of the death of Matías Catrileo and to the truck burning the previous days.[13] A relative of the dead persons claimed there was a campaign to empty the region of farmers and businessmen adding that "the guerrilla is winning" and lamented the "lack of rule of law".[13] A male activist wounded by a bullet was detained by police 600 m from the torched house.[12] by the moment the activist was on trials, the activist disguised as a machi to gain support from the press which supports both ethnic mapuches and terrorists from the Coordinadora Arauco-Malleco

A thesis claims the house was attacked by at least seven persons and that the "machi" had received the bullet wound from the occupants of the house before dying in the fire.[12]

On April 30 a freight train was derailed near Collipulli to be then assaulted by men with fireweapons.[14][15] Interior minister Andrés Chadwick said the Chilean Antiterrorist Law will be applied to the responsible for the attack.[14]

This article is issued from Wikipedia - version of the 10/20/2015. The text is available under the Creative Commons Attribution/Share Alike but additional terms may apply for the media files.