The BIA’s responsibilities once included providing health care to American Indians and Alaska Natives. In 1954 that function was legislatively transferred to the Department of Health, Education, and Welfare, now known as the U.S. Department of Health and Human Services, where it has remained to this day as the Indian Health Service.

Located at 1849 C Street, NW, in Washington, D.C., the BIA is headed by a bureau director who reports to the Assistant Secretary for Indian Affairs. The current director is Michael S. Black. The current assistant secretary (acting) is Lawrence S. Roberts, an enrolled member of the Oneida Nation of Wisconsin. On January 1, 2016, Roberts succeeded Kevin K. Washburn, an enrolled member of the Chickasaw Nation in Oklahoma, who served from October 9, 2012, to December 31, 2015.[1]

The BIA serves the 567 federally recognized tribes through four offices: 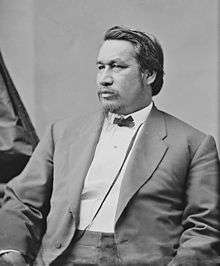 Ely S. Parker was the first Native American to be appointed as Commissioner of Indian affairs (1869–1871). 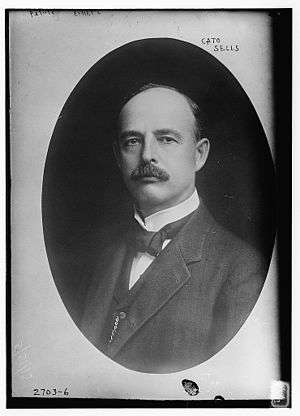 Agencies to relate to Native Americans had existed in the U.S. government since 1775, when the Second Continental Congress created a trio of Indian-related agencies. Benjamin Franklin and Patrick Henry were appointed among the early commissioners to negotiate treaties with Native Americans to obtain their neutrality during the American Revolutionary War.[3]

In 1789, the U.S. Congress placed Native American relations within the newly formed War Department. By 1806 the Congress had created a Superintendent of Indian Trade, or "Office of Indian Trade"[4] within the War Department, who was charged with maintaining the factory trading network of the fur trade. The post was held by Thomas L. McKenney from 1816 until the abolition of the factory system in 1822.

The government licensed traders to have some control in Indian territories and gain a share of the lucrative trade.

The abolition of the factory system left a vacuum within the U.S. government regarding Native American relations. The Bureau of Indian Affairs was formed on March 11, 1824, by Secretary of War John C. Calhoun, who created the agency as a division within his department, without authorization from the United States Congress. He appointed McKenney as the first head of the office, which went by several names. McKenney preferred to call it the "Indian Office", whereas the current name was preferred by Calhoun.

One of the most controversial policies of the Bureau of Indian Affairs was the late 19th to early 20th century decision to educate native children in separate boarding schools, with an emphasis on assimilation that prohibited them from using their indigenous languages, practices, and cultures. It emphasized being educated to European-American culture.[5] Some were beaten for praying to their own creator god.[6] 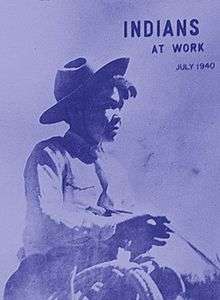 With the rise of American Indian activism in the 1960s and 1970s, and increasing demands for enforcement of treaty rights and sovereignty, the 1970s were a particularly turbulent period of BIA history.[7] The rise of activist groups such as the American Indian Movement (AIM) worried the U.S. government; the FBI responded both overtly and covertly (by creating COINTELPRO and other programs) to suppress possible uprisings among native peoples.[8]

As a branch of the U.S. government with personnel on Indian reservations, BIA police were involved in political actions such as:

Feeling the government was ignoring them, the protesters vandalized the building. After a week, the protesters left, having caused $700,000 in damages. Many records were lost, destroyed or stolen, including irreplaceable treaties, deeds, and water rights records, which some Indian officials said could set the tribes back 50 to 100 years.[10][11]

The BIA was implicated in supporting controversial tribal presidents, notably Dick Wilson, who was charged with being authoritarian; using tribal funds for a private paramilitary force, the Guardians of the Oglala Nation (or "GOON squad"), which he employed against opponents; intimidation of voters in the 1974 election; misappropriation of funds, and other misdeeds.[13] Many native peoples continue to oppose policies of the BIA, particularly problems in enforcing treaties, and handling records and income for trust lands.

In 2013 the Bureau was greatly affected by sequestration funding cuts of $800 million, which particularly affected the already-underfunded Indian Health Service.[14][15]

This Association was referenced in Sherman Alexie's 2007 novel, The Absolutely True Diary of a Part-time Indian

Cobell vs. Salazar, a major class action case related to trust lands, was settled in December 2009. The suit was filed against the U.S. Department of Interior, of which the BIA is part. A major responsibility has been the management of the Indian trust accounts. This was a class-action lawsuit regarding the federal government's management and accounting of more than 300,000 individual American Indian and Alaska Native trust accounts. A settlement fund totaling $3.4 billion is to be distributed to class members. This is to compensate for claims that prior U.S. officials had mismanaged the administration of Indian trust assets. In addition, the settlement establishes a $2 billion fund enabling federally recognized tribes to voluntarily buy-back and consolidate fractionated land interests.[19]

The Bureau is currently trying to evolve from a supervisory to an advisory role; however, this has been a difficult task as the BIA is known by many Native Americans as playing a police role in which the U.S. government historically dictated to tribes and their members what they could and could not do in accordance with treaties signed by both.[20]

Heads of the Bureau of Indian Affairs

Assistant Secretaries of the Interior for Indian Affairs[21]