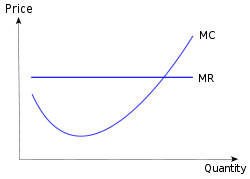 In economics, marginal cost is the change in the total cost that arises when the quantity produced is incremented by one unit, that is, it is the cost of producing one more unit of a good.[1] In general terms, marginal cost at each level of production includes any additional costs required to produce the next unit. For example, if producing additional vehicles requires building a new factory, the marginal cost of the extra vehicles includes the cost of the new factory. In practice, this analysis is segregated into short and long-run cases, so that, over the longest run, all costs become marginal. At each level of production and time period being considered, marginal costs include all costs that vary with the level of production, whereas other costs that do not vary with production are considered fixed.

The graph is plotted with Price, Cost and Revenue on the Y-axis and Quantity on the X-axis.

If the good being produced is infinitely divisible, the size of a marginal cost will change with volume; so a non-linear and non-proportional cost function includes the following:

If the cost function is differentiable joining, the marginal cost is the cost of the next unit produced referring to the basic volume.

If the cost function is not differentiable, the marginal cost can be expressed as follows.

A number of other factors can affect marginal cost and its applicability to real world problems. Some of these may be considered market failures. These may include information asymmetries, the presence of negative or positive externalities, transaction costs, price discrimination and others.

Since (by definition) fixed costs do not vary with production quantity, it drops out of the equation when it is differentiated. The important conclusion is that marginal cost is not related to fixed costs. This can be compared with average total cost or ATC, which is the total cost divided by the number of units produced and does include fixed costs.

For discrete calculation without calculus, marginal cost equals the change in total (or variable) cost that comes with each additional unit produced. In contrast, incremental cost is the composition of total cost from the surrogate of contributions, where any increment is determined by the contribution of the cost factors, not necessarily by single units.

Marginal cost is not the cost of producing the "next" or "last" unit.[2] As Silberberg and Suen note, the cost of the last unit is the same as the cost of the first unit and every other unit. In the short run, increasing production requires using more of the variable input — conventionally assumed to be labor. Adding more labor to a fixed capital stock reduces the marginal product of labor because of the diminishing marginal returns. This reduction in productivity is not limited to the additional labor needed to produce the marginal unit - the productivity of every unit of labor is reduced. Thus the costs of producing the marginal unit of output has two components: the cost associated with producing the marginal unit and the increase in average costs for all units produced due to the “damage” to the entire productive process (∂AC/∂q)q. The first component is the per unit or average cost. The second unit is the small increase in costs due to the law of diminishing marginal returns which increases the costs of all units of sold.

Marginal costs can also be expressed as the cost per unit of labor divided by the marginal product of labor.[3]

is the change in quantity of labor that affects a one unit change in output, this implies that this equals

where MPL is ratio of increase in the quantity produced per unit increase in labour i.e. ΔQ/ΔL. Therefore,

The portion of the marginal cost curve above its intersection with the average variable cost curve is the supply curve for a firm operating in a perfectly competitive market. (the portion of the MC curve below its intersection with the AVC curve is not part of the supply curve because a firm would not operate at price below the shut down point) This is not true for firms operating in other market structures. For example, while a monopoly "has" an MC curve it does not have a supply curve. In a perfectly competitive market, a supply curve shows the quantity a seller's willing and able to supply at each price - for each price there is a unique quantity that would be supplied. The one-to-one relationship simply is absent in the case of a monopoly. With a monopoly there could be an infinite number of prices associated with a given quantity. It all depends on the shape and position of the demand curve and its accompanying marginal revenue curve.

Decisions taken based on marginal costs

Marginal costs are not affected by changes in fixed cost. Marginal costs can be expressed as ∆C(q)∕∆Q. Since fixed costs do not vary with (depend on) changes in quantity, MC is ∆VC∕∆Q. Thus if fixed cost were to double of cost MC would not be affected and consequently the profit maximizing quantity and price would not change. This can be illustrated by graphing the short run total cost curve and the short run variable cost curve. The shape of the curves are identical. Each curve initially increases at a decreasing rate, reaches an inflection point, then increases at an increasing rate. The only difference between the curves is that the SRVC curve begins from the origin while the SRTC curve originates on the y-axis. The distance of the origin of the SRTC above the origin represents the fixed cost - the vertical distance between the curves. This distance remains constant as the quantity produced, Q, increases. MC is the slope of the SRVC curve. A change in fixed cost would be reflected by a change in the vertical distance between the SRTC and SRVC curve. Any such change would have no effect on the shape of the SRVC curve and therefore its slope at any point - MC.

Externalities are costs (or benefits) that are not borne by the parties to the economic transaction. A producer may, for example, pollute the environment, and others may bear those costs. A consumer may consume a good which produces benefits for society, such as education; because the individual does not receive all of the benefits, he may consume less than efficiency would suggest. Alternatively, an individual may be a smoker or alcoholic and impose costs on others. In these cases, production or consumption of the good in question may differ from the optimum level. 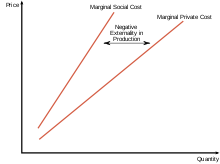 Such externalities are a result of firms externalising their costs onto a third party in order to reduce their own total cost. As a result of externalising such costs we see that members of society will be negatively affected by such behavior of the firm. In this case, we see that an increased cost of production on society creates a social cost curve that depicts a greater cost than the private cost curve.

In an equilibrium state we see that markets creating negative externalities of production will overproduce that good. As a result, the socially optimal production level would be lower than that observed. 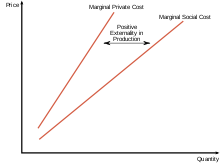 Examining the relevant diagram we see that such production creates a social cost curve that is less than that of the private curve. In an equilibrium state we see that markets creating positive externalities of production will under produce that good. As a result, the socially optimal production level would be greater than that observed.

Of great importance in the theory of marginal cost is the distinction between the marginal private and social costs. The marginal private cost shows the cost associated to the firm in question. It is the marginal private cost that is used by business decision makers in their profit maximization goals. Marginal social cost is similar to private cost in that it includes the cost of private enterprise but also any other cost (or offsetting benefit) to society to parties having no direct association with purchase or sale of the product. It incorporates all negative and positive externalities, of both production and consumption. Examples might include a social cost from air pollution affecting third parties or a social benefit from flu shots protecting others from infection.