In economics and particularly in consumer choice theory, the income-consumption curve is a curve in a graph in which the quantities of two goods are plotted on the two axes; the curve is the locus of points showing the consumption bundles chosen at each of various levels of income.

The income effect in economics can be defined as the change in consumption resulting from a change in real income.[1] This income change can come from one of two sources: from external sources, or from income being freed up (or soaked up) by a decrease (or increase) in the price of a good that money is being spent on. The effect of the former type of change in available income is depicted by the income-consumption curve discussed in the remainder of this article, while the effect of the freeing-up of existing income by a price drop is discussed along with its companion effect, the substitution effect, in the article on the latter.

The consumer's preferences, monetary income and prices play an important role in solving the consumer's optimization problem (choosing how much of various goods to consume so as to maximize their utility subject to a budget constraint). The comparative statics of consumer behavior investigates the effects of changes in the exogenous or independent variables (especially prices and money incomes of the consumers) on the chosen values of the endogenous or dependent variables (the consumer's demands for the goods). When the income of the consumer rises with the prices held constant, the optimal bundle chosen by the consumer changes as the feasible set available to him changes. The income–consumption curve is the set of tangency points of indifference curves with the various budget constraint lines, with prices held constant, as income increases shifting the budget constraint out. 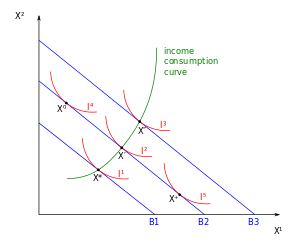 Figure 1: An increase in the income, with the prices of all goods fixed, causes consumers to alter their choice of market basket. The extreme left and right indifference curves belong to different individuals with different preferences, while the three central indifference curves belong to one individual for whom the income-consumption curve is shown.

The income effect is a phenomenon observed through changes in purchasing power. It reveals the change in quantity demanded brought by a change in real income. The figure 1 on the left shows the consumption patterns of the consumer of two goods X1 and X2, the prices of which are p1 and p2 respectively. The initial bundle X*, is the bundle which is chosen by the consumer on the budget line B1. An increase in the money income of the consumer, with p1 and p2 constant, will shift the budget line outward parallel to itself. 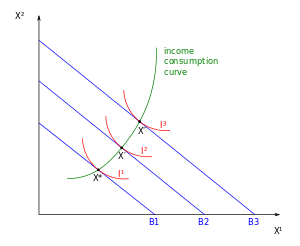 The upward sloping income-consumption curve implies that there will be an increase in the demand for both X1 and X2 as the income of the consumer rises and will cause the demand curves of the goods to shift to the right.[3] When the income-consumption curve has a positive slope then the income elasticity of demand will be positive. The greater the shifts of the demand curve to the right, the greater the income-elasticity of demand. In such a case, the goods will be normal goods.[3] 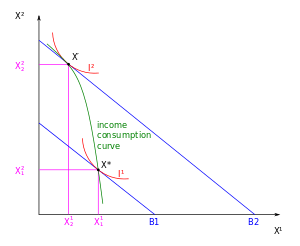 Figure 3: with an increase in the income of demand for normal good X2 rises while, demand for inferior good X1 falls.

, holding the price of good 1 fixed at 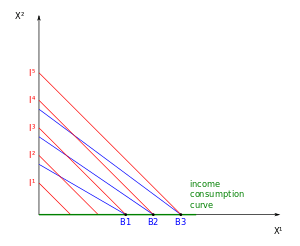 The figure on the right depicts the case of two goods X1 and X2 which are perfect substitutes, prices of which are p1 and p2 respectively. Here, I1, I2, I3, I4 and I5 are the straight line indifference curves, B1, B2 and B3 are the budget constraints and X*, X' and X" are the bundles chosen by the consumer. If it is assumed that p1 < p2 then the consumer would consume only X1 as this would maximize his utility.[5]

Thus, it can be said that, the amount of good X1 that the consumer consumes will increase, with an increase in the income of the consumer.[6] Thus, the income–consumption curve for the perfect substitutes X1 and X2 will be the horizontal axis.[5] 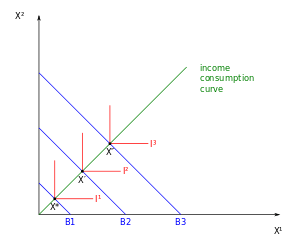 In case of perfect complements, the same amount of goods will be consumed by the consumer irrespective of say income, prices etc.[6] As the level of consumption remains the same, the income–consumption curve for perfect complements is the diagonal line passing through the origin as shown in Figure 5 on the left.

In the figure on the left, X*, X' and X" are the utility maximization points where the budget constraint lines B1, B2 and B3 touch the kinks of the L-shaped indifference curves I1, I2 and I3 respectively.[5] By joining these points of utility maximization, the income–consumption curve for perfect complements is obtained.

then the demand for good 1 will have the form

For good 2, the demand is given by

.[6] This too is clearly linear and homogeneous in m, thus making the income-consumption curves for both the goods 1 and 2 straight lines passing through the origin.

At each level of income level, say m, there would be an optimal choice for each of the goods. If only the case of a good say, good X1 is taken, the optimal choice at each set of prices and income or in other words, the demand function for good X1 can be written as: