Markus Haris Maulana or Muhammad Haris Maulana (born Markus Horison Ririhina on 14 March 1981 in Pangkalan Brandan, North Sumatra) is an Indonesian footballer who currently plays for PPSM Magelang in the Indonesian Premier League. He is a goalkeeper and he stands 186 cm. 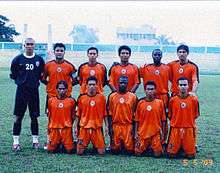 Markus when he in Persiraja Banda Aceh.

He was the main goalkeeper of the Indonesia national football team. His debut in the Senior National Team Squad came in a friendly match Indonesia against Hongkong on 1 June 2007, which Indonesia won the match 3–0. He played one time in Asian Cup 2007 for Indonesia's match against South Korea on 18 July 2007. Indonesia lost 0–1 in this game. He participated in PON 2000 in East Java and PON 2004 in Sumatera Selatan.

After five years playing for PSMS Medan, Markus decided to move to Persik Kediri in 2008 but in the mid season of 2008/09, he went back to his former club.

In the 2009–10 season of Indonesia Super League, Markus played for Arema Malang. He also played for Persib Bandung after making his debut for the club on 21 February 2010 with 2-0 against Persisam Putra Samarinda as a substitute on the farewell match of Sinthaweechai Hathairattanakool.

Markus changed his name in August 2009 after converting to Islam.[1] He was married to famous Indonesian actress Kiki Amalia on November 2010 after divorced from his first wife.