The Asian Football Confederation's 2007 AFC Asian Cup finals were held from 7 to 29 July 2007. For the first time in its history, the competition was co-hosted by four nations: Indonesia, Malaysia, Thailand and Vietnam. For the first time in the nation's history, Iraq won the continental title after it defeated Saudi Arabia 1–0 in the final. As the winner, Iraq represented the AFC in the 2009 FIFA Confederations Cup.

Before 2007 and every four years, Asia often held its continental tournament from 1956 until China in 2004. With the Summer Olympic Games and the European Football Championship also held in the same year as the Asian Cup, the AFC changed their tradition. Beginning in 2007, Asia will hold its continental tournament a year earlier, and every four years henceforth from that date.

An estimated worldwide television audience of 650 million people tuned in to watch the 2007 AFC Asian Cup.[1]

Australia participated for the first time since moving to the AFC from the OFC. Australia happened to also be the tournament's first nation aside from the co-hosts to qualify for the 2007 Asian Cup. 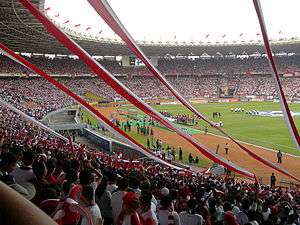 Mohammed Bin Hammam proposed and presented a move to have four host nations for the 2007 Asian Cup. However, he later regretted this decision and called it his "mistake", citing the financial and logistic difficulties in organising an event across four countries. He said that "It is proving very difficult for [the executive committee as they] have to have four organising committees, four media centres and there are also financial considerations." He also revealed that "[He would] definitely [not do] it [again]", if he had the choice.

In June 2005, the Asian Football Confederation warned Thailand that it needed to improve its facilities before 2007, otherwise it would be dropped, possibly being replaced with Singapore. On 12 August of the same year, the AFC confirmed that Thailand would be a co-host of the 2007 Asian Cup.[2] However, in October 2006, Thailand was again warned to improve its facilities in 90 days.[3]

The qualification round ran from 22 February 2006, to 15 November 2006. For the first time, the defending champions (Japan) needed to attend the qualification stage. Twenty-four nations would be split into six four-team groups for the qualification phase of the 2007 AFC Asian Cup. As the four co-hosts – Indonesia, Malaysia, Thailand and Vietnam – were already granted automatic qualification.

For the first time, the seeds are based on the October 2006 FIFA World Rankings instead of the basis of the performance from the previous AFC Asian Cup competition. This was to ensure that the same number of strong teams do not meet in the early stage.[4]

The four seeded teams were announced on 19 December 2006. The seeds comprised Pot 4 in the draw. Pot 1 consists of the teams from all co-hosts.

On 19 December 2006, the draw was held in the Kuala Lumpur Convention Centre.

The Official Match Ball for the 2007 AFC Asian Cup was launched by Nike on 15 May 2007, making it the first time ever that a ball had been launched specifically for any football competition in Asia.[5] The Nike Mercurial Veloci AC features four blue stripes with gold trim with each host city's name inscribed, as well as the AFC Asian Cup logo.[6]

Shamsul Maidin after the referee pulled out with injury.[8]

In 2007 AFC Asian Cup had two songs: "I Believe" by Tata Young from Thailand and "Play Hard" by Kim from Vietnam. 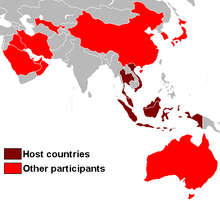 The Asian Cup saw many upsets in the early stages of the tournament. In Group A, Oman held favourites Australia to a surprising draw. Oman took the lead and would have won save for an injury time goal from Tim Cahill. Next, hosts Vietnam shocked Gulf Champions UAE with a 2–0 victory. In the same group, Qatar held Japan to a shock 1–1 draw. The result caused Japan coach Ivica Osim to fly into a rage in which he branded his players as 'amateurs' and reduced his interpreter to tears.[9] In Group D, Indonesia continued the undefeated streak of the hosts by defeating Bahrain 2–1. Malaysia ended up as the only host country to drop their match, losing to China 5–1. Thailand recorded just its 2nd win in the Asian Cup finals (their other was in 1972 against Cambodia), and its first ever win in regulation, when they beat Oman 2–0 on 12 July. Meanwhile, Australia was upset by a 3–1 defeat against Iraq the following day, leaving them floundering in the tournament despite high expectations.

In the quarterfinals, Iraq defeated Vietnam 2–0, while South Korea ('Korea Republic') needed a penalty shootout to eliminate Iran 4–2. Japan also needed a penalty shootout to defeat Australia 4–3 (this was the first time Australian 'keeper Mark Schwarzer had ever come out on the losing end of a penalty shoot-out), and Saudi Arabia won over Uzbekistan 2–1. Iraq upset South Korea in the semi-finals by winning 4–3 on penalties, resulting in thousands of Iraqis celebrating in the streets of Baghdad. Over 50 Iraqis were killed by terrorist bombs targeting these crowds.[10] In the other semi-finals, Saudi Arabia topped defending champions Japan 3–2 to make an all-Arab affair for the final match.

Iraq went on to defeat Saudi Arabia 1–0 taking the Asian Cup title. Iraqi forward and captain Younis Mahmoud was given the title of Most Valuable Player. South Korea took third place narrowly beating Japan in penalties 6–5. It was the third consecutive match in the tournament that South Korea played 0–0 before a penalty shootout. Iraq, Saudi Arabia, and South Korea, as the top three national teams in the tournament, all received automatic berths to the 2011 Asian Cup along with the next hosts Qatar. .[11]

Team of the tournament

The Toshiba All-Star XI was voted for by fans on the official Asian Cup website. The overall results of the votes were:

With four goals, Younis Mahmoud, Naohiro Takahara and Yasser Al-Qahtani are the top scorers in the tournament. In total, 84 goals were scored by 57 different players, with two of them credited as own goals.