The Massachusetts Governor's Council (also known as the Executive Council) is a governmental body that provides advice and consent in certain matters – such as judicial nominations, pardons, and commutations – to the Governor of Massachusetts. Councillors are elected by the general public and their duties are set forth in the Massachusetts Constitution.

The Massachusetts Bay Colony received its first royal charter in 1629, with the founding of Boston following the arrival in 1630 of Governor John Winthrop and a fleet of principally Puritan settlers. The colony's governance was based on this charter, which included the establishment of a "council of assistants". The assistants were a body of magistrates who not only decided judicial cases, but also played a role in the colony's lawmaking. The assistants were elected by the colony's freemen.

After the colony's original charter was revoked in 1684, there was the short-lived Dominion of New England (1686-1689), which was succeeded in the territories of modern Massachusetts and Maine by the Province of Massachusetts Bay. The charter for the province called for "eight and twenty assistants, or counsellors, to be advising and assisting to the governor" who were to be chosen annually by the Great and General Court.[1] It further specified that the council was to assume the duties of the governor in the absence of both the royal governor and lieutenant governor (who were appointed by the crown), and enumerated some of the specific issues on which the council was to advise the governor. During the provincial period, the relationship between the governor and council was sometimes difficult, since the council represented colonial interests which diverged from the crown interests of the governor. 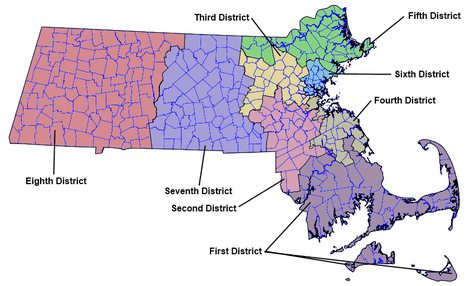 The eight councilors are elected every two years, one for each of eight councillor districts, residency in the district is not a requirement. The council membership was originally non elected appointment by the governor. The state constitution upon the prompting of the American Party (Know Nothings) in 1854 was changed to make the council an[4] elected position open to all state residents.[5] The Governor's Council districts are specially composed. Each district consists of the entirety of five contiguous Massachusetts Senate districts.

There are provisions in the Massachusetts Constitution for filling unexpected vacancies. If a seat on the Council becomes vacant, the General Court may, by concurrent vote, select some person from the relevant councillor district to fill the opening.[6] If the General Court is not in session, the Governor may select the new councillor, with the advice and consent of the existing Council.

The Council generally meets at noon on Wednesdays in its State House Chamber, next to the Governor's Office. Pursuant to the Massachusetts Constitution, the Governor may, in general and at his discretion, from time to time assemble the Council for the ordering and directing the affairs of the commonwealth.[8] In addition, the Governor must seek the advice and consent of the Council with respect to nominations of judicial officers,[9] appointment and removal of notaries public and justices of the peace,[10] issuance of pardons and commutations,[11] and payment of monies from the treasury.[12]

The outside conduct of some councillors has drawn public scrutiny in recent years. Felony assault charges were dismissed in July 2008 against one councilor, Marilyn Devaney.[14] In the 2008 election, councillor Kelly A. Timilty falsified the endorsement of the governor and later was fined.[15] The 2008 election generated higher than usual interest in Council seats,[16] but all of the incumbents were reelected.[17]

Originally, the Massachusetts Constitution placed the Governor's Council in the line of executive succession. If the offices of Governor and Lieutenant Governor were both vacant, the Council would act as chief executive.[18] During the colonial period this occurred three times. Following statehood, it occurred only once. After the death of Governor Increase Sumner in 1799, Lieutenant Governor Moses Gill became Acting Governor, and following his death in 1800 the council chaired by Thomas Dawes succeeded to the governorship.

The constitutional line of succession was amended in 1918 to remove the Council and insert the "secretary, attorney-general, treasurer and receiver-general, and auditor," in that order.[19]