Untouchability is a status of certain social groups confined to menial and despised jobs. It is associated with the Hindu caste system, but similar groups exist outside Hinduism, for example the Burakumin in Japan and Hutu and Twa of Rwanda. At the beginning of the twenty-first century there were over 160 million untouchables on the Indian subcontinent.[1][2][3][4] 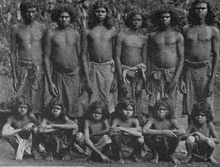 The sacred books of the Hindus contain no uniform or consistent account of the origin of castes, but offer mystical, mythical, and rationalistic explanations of it, or fanciful conjecture concerning it.[5]

The earliest of the Hindu Books, written by scholars (10.90.11-12), envisage a society divided into four theoretical varnas ("colors", "types" or "orders" ): Brahman (scholar-priest), Kshatriya (warrior-chief), Vaishya (farmer, artisan, traders), and Shudras (menials, servants). The idea is further developed in the Laws of Manu (200 BCE-200 CE). The first three varnas are known as the twice-born, all of whom undergo a ceremony in their youth admitting them formally as students of the vedas, which was the foundation for a later high status.

The varna caste division does not mention untouchables, but an untouchable occupation (ćaṇḍālas, handlers of corpses) is mentioned in the Manu Smriti and early Buddhist literature, as resulting from the union of Shudra males and Brahmin females.

While the varnas were theoretical, idealistic categories, jatis, meaning "by birth" were the thousands of tribal, post-tribal and occupational groupings that actually existed. A jati is an endogamous group, sharing many customs and often an occupation, usually based in one language area. Some scholars believe that Jatis were a pre-Aryan social division of society which, by being grafted on to the Aryan concept of social order (varna), has acquired Brahmanical sanction.[6]

Beliefs about pollution generally regulated relations between all the castes. Members were not allowed to marry outside their caste; there were strict rules about the kind of food and drink one could accept and from whom; and there were restrictions on approaching and visiting members of another caste. Violations of these rules entailed purificatory rites, penalties and sometimes expulsion from the caste. This differentiated society was often justified with traditional Hindu religious beliefs about samsara (reincarnation) and karma (quality of actions). A person's position in this life was determined by his or her actions in previous lives. Persons who were born in a Brahman family must have performed good deeds in their earlier lives. Being born a Shudra was punishment for the sinful acts committed in previous lives.

Shudras were confined to menial labour and despised or polluting jobs, working as farm laborers, handlers of unclean animals such as pigs, and curers of hides. Burning ghat workers and executioners are two of the occupations considered most polluting. The seventh century Chinese traveler Xuanzang listed butchers, fishermen, public performers, executioners, and scavengers as marked castes living outside the city. Anything to do with a dead cow or its hide is the work only of untouchables. They were denied access to many Hindu temples, were not allowed to read religious Sanskrit books, could not use common village wells and tanks, and lived in settlements outside the village, forbidden to enter inside the residential areas of the upper castes. A caste of ritual drummers in the south known as the Parayan contributed the word pariah (outcaste) to English.

In many parts of the country Untouchables Marriages are generally arranged between persons of the same caste. Deferential bodily movements and speech patterns in the presence of members of the upper castes governed the appropriate conduct of untouchables in public, and had forbidden them the use of various markers of honor and status, from modes of transport such as elephants, horses, and palanquins to apparel and accessories such as upper-body garments, turbans, and shoes.

Toward the end of the nineteenth century, the British began recording and codifying caste, and more untouchable castes based usually on occupation emerged. In the first census the number of outcastes was about 5% of the population, but in the 1911 Census, newer groups were added by the British, by considering the food habits (eg Beefeating)and relationship of the groups with Brahmins and this expanded group was called the Depressed classes, which eventually became the Untouchables:Bhangis or removers of human waste in the north; Doms, the caretakers of the extensive burning grounds in the holy city of Benaras (Varanasi); Dhobis, washermen; Mahar village watchmen and helpers in Maharashtra and Chamar, leather workers. However, occupation is not always a reliable guide. Laundrymen (Dhobis) may be untouchables in the south, where even the Pariahs looked down on them, but not in the state of Maharashtra. For the 1931 Census, another terminology 'Exterior Castes' was applied to this group.

In 1935, the new term "scheduled castes", those on a list or schedule, was applied to 429 castes. By 1993, in independent democratic India, the number had grown to 4,635, including subcastes and small castes. Harijan ("children of God", a term coined by Gandhi) became the most popular word for the general public, replacing the terms "depressed classes", "exterior castes", "outcastes", and "untouchables".

The British had granted special political representation to the Untouchables and also started a system of reservations in government jobs in the early 1940's. The scheduled castes became politically distinct under the leadership of Bhimrao Ramji Ambedkar. Ambedkar, who converted from Hinduism to Buddhism at the end of his life in 1956, held that the Untouchables had been Buddhists isolated and despised when Brahmanism became dominant about the fourth century. While Ambedkar, supported by the British, pursued all means of securing special rights for Untouchables, Gandhi opposed those measures as too divisive,condemning untouchability without renouncing Varna (Hinduism).

After India became independent from British rule in 1947, a new Constitution was adopted, which abolished untouchability and prohibited discrimination in public places and offices. In addition, quotas were reserved for Untouchables in higher educational institutions, government services, and 25% seats in the lower houses of the Indian parliament. Thus these ex-Untouchables have managed to gain entry into the middle class as school teachers, clerks, bank tellers, typists, and government officials. However, while some untouchable leaders have achieved power and wealth, most of these politicians have little say in party matters and government policy. The majority of Untouchables remain landless agricultural laborers, powerless, poor, and illiterate.

Since the 1970s, the name Dalit ("ground down", "broken up", as in the title "Broken People") has replaced the words "untouchable" and "harijan" in most public pronouncements and the press. Young men who called themselves Dalit Panthers in imitation of the Black Panthers in the United States are no longer active.

Other lower castes, who belong mainly to the Shudra caste and form about 50% of the country's population, have demanded and obtained from the government benefits similar to those available to Dalits in government service and educational institutions, leading to discontent among the upper castes.

A Dalit political party, the Bahujan Samaj Party ("party of the majority"), founded in 1984 by Kanshi Ram, an untouchable Sikh, is particularly strong in the northern Indian state of Uttar Pradesh where they received 20.61% of the votes in the 1996 general elections. Mayawati, a Chamar woman, served three terms as chief minister of Uttar Pradesh. However, at the national level, the party has captured only 11 seats (3.64% of the votes) in the 1996 general elections.

In the 1990s there were numerous instances of violence between the middle peasant castes and Dalits in rural areas.

The worship and festivals of the lower castes, including untouchables, emphasize the use of blood sacrifice, liquor, possession, and various forms of bodily chastisements and self-inflicted tortures. The untouchables who became Sikh have created specific faiths that combine Sikhism with popular practices of Hinduism and Islam. Indian Islam refers not so much to the varna distinctions of caste Hinduism, as to the social separation between ashraf (well-born) and adjlaf (low-born) Muslims. High and low Muslims might worship together in the mosque, but in relations of marriage, commensality, and occupation they remain separate. The Roman Catholic Church, with an extensive membership in southern India, has historically tolerated caste divisions, and has traditionally provided entirely separate or spatially segregated services for their higher and lower caste constituents. Protestant churches in South Asia have opposed caste, but the taint of impurity and its attendant discrimination have clung to their untouchable members.