Matthew Lyon (July 14, 1749 – August 1, 1822) was an Irish-born American printer, farmer, soldier and politician, serving as a United States Representative from both Vermont and Kentucky.

Lyon represented Vermont in Congress from 1797 to 1801, and represented Kentucky from 1803 to 1811. His tenure in Congress was tumultuous. He brawled with one Congressman; and was jailed on charges of violating the Sedition Act, winning re-election to Congress from inside his jail cell.

Lyon attended school in Dublin, having been born in nearby County Wicklow, Ireland. He began to learn the printer's trade in 1763, but emigrated to Connecticut in 1764. Lyon landed as a redemptioner and worked on a farm in Woodbury, where he continued his education.

In 1774, Lyon moved to Wallingford, Vermont (then known as the New Hampshire Grants), and organized a company of militia. He served as adjutant in Colonel Seth Warner's regiment in Canada in 1775, and was then commissioned a second lieutenant in the regiment known as the Green Mountain Boys in July 1776. He moved to Arlington, Vermont, in 1777.

Lyon served during the Revolutionary War, serving initially under Horatio Gates in upstate New York. In a version of the event later circulated by his political opponents, Lyon was reportedly cashiered for cowardice and ordered to carry a wooden sword to represent his shame.[1] In Lyon's version, his men and he were not being put to good use, and he asked to leave Gates' command and join the regiment commanded by Seth Warner. Lyon's conduct was vindicated by both Arthur St. Clair and James Wilkinson.[2][3]

Lyon subsequently joined Warner's regiment as a paymaster with the rank of captain, and served during the Battle of Bennington and other actions.[4] After leaving Warner's Regiment following the Battle of Saratoga, Lyon continued his revolutionary activity, serving as a member of Vermont's Council of Safety, a captain in the militia (later advancing to colonel), paymaster general of the Vermont Militia, deputy secretary to Governor Thomas Chittenden, and assistant to Vermont's treasurer.[5] Lyon became a member of the Vermont House of Representatives from Arlington, serving from 1779 to 1783. He founded Fair Haven, Vermont in 1783 and returned to the state House of Representatives from 1783 to 1796 as Fair Haven's member. (At the time, Vermont apportioned the House by town, with each town having one representative.)

Lyon built and operated various kinds of mills, including one for the manufacture of paper. He established a printing office in 1793 and published the Farmers' Library from 1793 through 1794.[6] It was officially listed as being operated by his son, James Lyon. It was continued as the Fair Haven Gazette.[7]

Lyon was an unsuccessful candidate for election to the Second and Third Congresses, and unsuccessfully contested the election of Israel Smith to the Fourth Congress. He was elected as a Democratic-Republican to the Fifth and Sixth Congresses (March 4, 1797 – March 3, 1801); he was not a candidate for renomination in 1800. 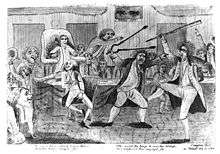 Lyon had the distinction of being one of the first two members to have an alleged ethics violation investigated when he was accused of "gross indecency" for spitting in Roger Griswold's face, and Griswold was investigated for attacking Lyon in retaliation. On January 30, 1798, the House was considering whether to remove William Blount of Tennessee from office. Griswold was trying to attract Lyon's attention in order to have a dialogue on the issue, but Lyon was ignoring him on purpose, since they belonged to opposing political parties (Lyon was a Democratic-Republican and Griswold a Federalist). Griswold finally lost his temper and insulted Lyon by calling him a scoundrel, which at the time was considered profanity. Their clash escalated when Lyon declared himself willing to fight for the interest of the common man. Mockingly, Griswold asked if Lyon would be using his wooden sword, a reference to Lyon's supposed dismissal from Gates' command during the Revolution. Furious, Lyon spat on Griswold, earning himself the nickname "The Spitting Lyon". Lyon later apologized to the House, claiming he had not known it was in session when he confronted Griswold, and meant no breach of decorum or disrespect to the House as a whole. Not satisfied with the apology, on February 15, 1798 Griswold retaliated by attacking Lyon with a wooden cane, beating him about the head and shoulders in view of other representatives on the House floor. Lyon retreated to a fire pit and defended himself with the tongs until other Congressmen broke up the fight,[8] with several pulling Griswold by his legs to get him to let go of Lyon.[9] Although the committee appointed to investigate recommended censure of both Lyon and Griswold, the House as a whole rejected the motion.[10]

Lyon also has the distinction of being the only person to be elected to Congress while in jail. On October 10, 1798, Lyon was found guilty of sedition, in violation of the Alien and Sedition Acts; which prohibited malicious writing of the American government as a whole, or of the houses of Congress, or of the President. Lyon was the first person to be put to trial for violating the acts on charges of criticizing Federalist president John Adams for his pretense of going to war against France.

Lyon had launched his own newspaper, The Scourge Of Aristocracy and Repository of Important Political Truth,[11] when the Rutland Herald refused to publish his perceived radical work. On October 1, Lyon printed this paper speaking of the "unbounded thirst for ridiculous pomp, foolish adulation, and selfish avarice," as well as Adams' corruption of religion to further his war aims.[12] At the time it was quite common for Federalists to cite religious reasons for going to war against France; as well as for silencing the opposition.[13] Lyon had also, before the Alien and Sedition Acts had been passed, written a letter to one Alden Spooner, the publisher of the Vermont Journal. In this letter, which was written in response to perceived personal attacks from the Journal, Lyon called the president "bullying," and the Senate's responses "stupid."[12] Once the Alien and Sedition Acts were passed, the Federalists pushed for this letter to be printed in the Vermont Journal, adding charges to Lyon by subterfuge.[12] One other charge included publishing letters written by the poet Joel Barlow, which Lyon had read at political rallies.[14] These also were published prior to the Acts.[12][15] Lyon's defense was to be the unconstitutionality of the Acts, as Jeffersonians saw these Acts as violating the First Amendment to the Constitution. In Lyon's particular case, there was the aforementioned letter to Alden Spooner as well as that of Barlow, which meant Lyon felt entitled to bring up the Constitution's safeguards against ex post facto laws.[16][17] This defense was not allowed.[17][18]

Lyon was sentenced to four months in a Vergennes jail cell of dimensions 16' x 12' used for felons, counterfeiters, thieves, and runaway slaves, and ordered to pay a $1,000 fine and court costs, while Judge Paterson lamented being unable to give a harsher punishment.[18] A bit of a resistance movement was created; the Green Mountain Boys even threatened to destroy the jail and might have done so if not for Lyon urging peaceful resistance.[19] While in jail, Lyon won election to the Sixth Congress by nearly doubling the votes of his closest adversary, 4,576 to 2,444.[19] Upon his release, Lyon exclaimed "I am on my way to Philadelphia!"[20] In the election of 1800 Matthew Lyon cast the deciding vote for Jefferson after the election went to the House of Representatives because of an electoral tie. Lyon's trial, conviction, and incarceration boosted his status among the fledgling American Republican political elite as something of a free-speech martyr.[21]

Life away from Vermont

Lyon moved to Kentucky in 1801 and settled in Livingston County, Kentucky (later Caldwell County and now Lyon County). He became a member of the Kentucky House of Representatives in 1802 and was elected to the Eighth and to the three succeeding Congresses (March 4, 1803 – March 3, 1811). He was an unsuccessful candidate for reelection in 1810 to the Twelfth Congress.

Lyon was appointed United States factor to the Cherokee Nation in Arkansas Territory in 1820; and again attempted to serve in Washington, D.C. when he unsuccessfully contested the election of James W. Bates as a delegate from the Arkansas Territory to the Seventeenth Congress. Lyon died in Spadra Bluff, Arkansas (near Clarksville) on August 1, 1822. He was initially interred in Spadra Bluff Cemetery, and in 1833 he was reinterred in Eddyville Cemetery in Eddyville, Kentucky.

The home of Matthew Lyon