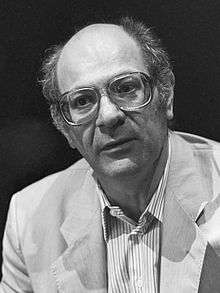 Mauricio Kagel (Spanish pronunciation: [mauˈɾisjo ˈkaɣel]; December 24, 1931 – September 18, 2008) was a German-Argentine composer. He was notable for his interest in developing the theatrical side of musical performance (Grimshaw 2009).

Kagel was born in Buenos Aires, Argentina, into a Jewish family which fled from Russia in the 1920s (Anon. n.d.). He studied music, history of literature, and philosophy in Buenos Aires (Grimshaw 2009). In 1957 he came as a scholar to Cologne, Germany, where he lived until his death.

He taught at the State University of New York at Buffalo from 1964 to 1965 as Slee Professor of music theory and at the Berlin Film and Television Academy as a visiting lecturer. He served as director of courses for new music in Gothenburg and Cologne (Attinello 2001). He was professor for new music theatre at the Cologne Conservatory from 1974 to 1997.

Invited by Walter Fink, he was the second composer featured in the annual Komponistenporträt of the Rheingau Musik Festival in 1991. In 2000 he received the Ernst von Siemens Music Prize.

Many of his later pieces give specific theatrical instructions to the performers (Kennedy and Bourne 2006), such as to adopt certain facial expressions while playing, to make their stage entrances in a particular way, to physically interact with other performers and so on. His work is comparable to the Theatre of the Absurd.

Staatstheater (1971) is probably the piece that most clearly shows his absurdist tendency. This work is described as a "ballet for non-dancers", though in many ways is more like an opera, and the devices it uses as musical instruments include chamber pots and even enema equipment. As the work progresses, the piece itself, and opera and ballet in general, becomes its own subject matter. Similar is the radio play Ein Aufnahmezustand (1969) which is about the incidents surrounding the recording of a radio play.

Kagel also made films, with one of the best known being Ludwig van (1970), a critical interrogation of the uses of Beethoven's music made during the bicentenary of that composer's birth (Griffiths 1978, 188). In it, a reproduction of Beethoven's studio is seen, as part of a fictive visit of the Beethoven House in Bonn. Everything in it is papered with sheet music of Beethoven's pieces. The soundtrack of the film is a piano playing the music as it appears in each shot. Because the music has been wrapped around curves and edges, it is somewhat distorted, but Beethovenian motifs can still be heard. In other parts, the film contains parodies of radio or TV broadcasts connected with the "Beethoven Year 1770". Kagel later turned the film into a piece of sheet music itself which could be performed in a concert without the film—the score consists of close-ups of various areas of the studio, which are to be interpreted by the performing pianist.

Other pieces include Con Voce (With Voice), where a masked trio silently mimes playing instruments and Match (1964), a tennis game for cellists with a percussionist as umpire (Griffiths 1978, 188) (for Siegfried Palm), also the subject of one of Kagel's films and perhaps the best-known of his works of instrumental theatre (Griffiths 1981, 812).

Kagel also wrote a large number of more conventional, "pure" pieces, including orchestral music, chamber music, and film scores. Many of these also make references to music of the past by, amongst others, Beethoven, Brahms, Bach, and Liszt (Warnaby 1981, 38; Decarsin 1985, 260.

He has been regarded by music historians as deploying a critical intelligence interrogating the position of music in society (Griffiths 1978, 188).