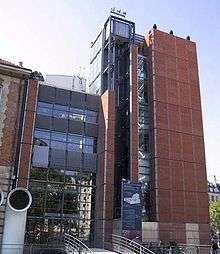 Western façade of the IRCAM building

IRCAM (Institut de Recherche et Coordination Acoustique/Musique, or Institute for Research and Coordination in Acoustics/Music in English) is a French institute for science about music and sound and avant garde electro-acoustical art music. It is situated next to, and is organisationally linked with, the Centre Pompidou in Paris. The extension of the building was designed by Renzo Piano and Richard Rogers.

A centre for musical research

Several concepts for electronic music and audio processing have emerged at IRCAM. John Chowning pioneered work on FM synthesis at IRCAM, and Miller Puckette originally wrote Max at IRCAM in the mid-1980s, which would become the real-time audio processing graphical programming environment Max/MSP. Max/MSP has subsequently become a widely used tool in electroacoustic music. Many of the techniques associated with spectralism, such as analyses based on fast Fourier transforms, were made practical by technological contributions at IRCAM. For instance, researchers at IRCAM have developed a special microphone capable of isolating each of the cello's four strings for separate amplification or electronic treatment. Along with tools for sound synthesis and analysis, IRCAM has played an instrumental role in developing programs for visualization of musical form with the creation of Open Music, a Lisp-based visual programming language.[1]

IRCAM provides classes to train composers in music technology.[2] Composers who do not have programming experience to create the technology end of a piece for ensemble and electronics are provided with an assistant who helps them to realise technically intensive parts of the piece. The assistant will follow the conceptual advice of a composer with no technology experience to realize a computer part, or will help a composer who can program in Max/MSP to make their "patch" more efficient and elegant. Tristan Murail's Désintégrations is an example of a piece realized in this program by a composer with significant technological skill, whereas Harrison Birtwistle's The Mask of Orpheus required an active and creative role for the technology assistants, such as Barry Anderson and Ian Dearden.

A cultural centre for musical modernism

Apart from electroacoustic programmes, IRCAM has programmes in contemporary classical music. It has disseminated music of post World War II modernist musicians such as that of Luciano Berio or Pierre Boulez, as well as younger performers and composers. Musical spectralism such as that of Tristan Murail, has also received support from IRCAM. Murail taught at IRCAM for a time.[3] Kaija Saariaho, whose work has been influenced by spectralism, has also been supported by IRCAM.[4]

There are regular concerts at IRCAM.[5]

In 1970 president Georges Pompidou asked Pierre Boulez to found an institution for research in music. In 1973 the section of the building underneath Place Igor Stravinsky was finished, and the center opened in 1977. From the outset, Boulez was in charge of the centre.[6] The initial administrators included Luciano Berio, Vinko Globokar, Jean-Claude Risset, and Max Mathews. In 1992 Boulez, who then became honorary director, was succeeded by Laurent Bayle.[7] In 2002 the philosopher Bernard Stiegler became the new head of the institute. On January 1, 2006, Stiegler became Director of Cultural Development at the Centre Pompidou and was replaced by Frank Madlener.

The creation of IRCAM coincided with the rise of the debates about modernism and postmodernism in culture and the arts.[8]

Its multimedia library[9] was established in 1996.[10] It is one of the very first music hybrid libraries to have been created with close to 1000 hours of recorded music and over 2,000 scientific articles available online, in addition to its physical collections of sheet music and books on music and related domains.

Several international conferences have been held at IRCAM:

Orchidée is developed as a tool to aid in orchestral composition in which musical scores using traditional instruments are generated by imitating a target input sound. It is used in Jonathan Harvey's 2008 piece, "Speakings", a composition based on emulating speech patterns and inflections. Orchidée is capable of computing the complex combinatorial possibilities of an orchestra based on musical attributes such as dynamics and instruments, perceptual attributes such as brightness, and timbre models.[13]

IRCAM software is distributed via a subscription-based Forum.[14] As of 2011, IRCAM Forum has 534 members including individual artists and art institutions around the world.[15] IRCAM Forum members gather yearly at IRCAM for workshops regarding new technologies developed at IRCAM and elsewhere.

There are also partnerships with companies such as Cycling 74 (Max/MSP) and Flux:: (IRCAM Tools) for the development of proprietary software.