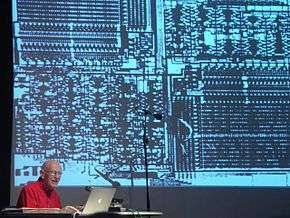 Max Mathews on his 80th birthday 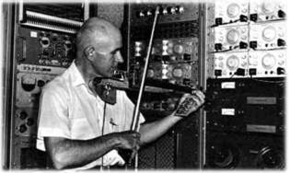 Max Mathews playing one of the electronic violins he built, in his analog electronics lab at Bell Telephone Labs (c.1970)

Mathews studied electrical engineering at the California Institute of Technology and the Massachusetts Institute of Technology, receiving a Sc.D. in 1954. Working at Bell Labs, Mathews wrote MUSIC, the first widely used program for sound generation, in 1957. For the rest of the century, he continued as a leader in digital audio research, synthesis, and human-computer interaction as it pertains to music performance. In 1968, Mathews and L. Rosler developed Graphic 1, an interactive graphical sound system on which one could draw figures using a light-pen that would be converted into sound, simplifying the process of composing computer generated music.[1][2] Also in 1970, Mathews and F. R. Moore developed the GROOVE (Generated Real-time Output Operations on Voltage-controlled Equipment) system,[3] a first fully developed music synthesis system for interactive composition and realtime performance, using 3C/Honeywell DDP-24[4] (or DDP-224[5]) minicomputers. It used a CRT display to simplify the management of music synthesis in realtime, 12bit D/A for realtime sound playback, an interface for analog devices, and even several controllers including a musical keyboard, knobs, and rotating joysticks to capture realtime performance.[1][5][2]

Although MUSIC was not the first attempt to generate sound with a computer (an Australian CSIRAC computer played tunes as early as 1951),[6] Mathews fathered generations of digital music tools. He described his work in parental terms, in the following excerpt from "Horizons in Computer Music", March 8–9, 1997, Indiana University:

Computer performance of music was born in 1957 when an IBM 704 in NYC played a 17 second composition on the Music I program which I wrote. The timbres and notes were not inspiring, but the technical breakthrough is still reverberating. Music I led me to Music II through V. A host of others wrote Music 10, Music 360, Music 15, Csound and Cmix. Many exciting pieces are now performed digitally. The IBM 704 and its siblings were strictly studio machines – they were far too slow to synthesize music in real-time. Chowning's FM algorithms and the advent of fast, inexpensive, digital chips made real-time possible, and equally important, made it affordable.

Starting with the GROOVE program in 1970, my interests have focused on live performance and what a computer can do to aid a performer. I made a controller, the Radio-Baton, plus a program, the Conductor program, to provide new ways for interpreting and performing traditional scores. In addition to contemporary composers, these proved attractive to soloists as a way of playing orchestral accompaniments. Singers often prefer to play their own accompaniments. Recently I have added improvisational options which make it easy to write compositional algorithms. These can involve precomposed sequences, random functions, and live performance gestures. The algorithms are written in the C language. We have taught a course in this area to Stanford undergraduates for two years. To our happy surprise, the students liked learning and using C. Primarily I believe it gives them a feeling of complete power to command the computer to do anything it is capable of doing. 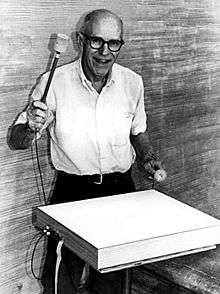 In 1961, Mathews arranged the accompaniment of the song "Daisy Bell" for an uncanny performance by computer-synthesized human voice, using technology developed by John Kelly of Bell Laboratories and others. Author Arthur C. Clarke was coincidentally visiting friend and colleague John Pierce at the Bell Labs Murray Hill facility at the time of this remarkable speech synthesis demonstration and was so impressed that he later told Stanley Kubrick to use it in 2001: A Space Odyssey, in the climactic scene where the HAL 9000 computer sings while his cognitive functions are disabled.[7]

Mathews directed the Acoustical and Behavioral Research Center at Bell Laboratories from 1962 to 1985, which carried out research in speech communication, visual communication, human memory and learning, programmed instruction, analysis of subjective opinions, physical acoustics, and industrial robotics. From 1974 to 1980 he was the Scientific Advisor to the Institute de Recherche et Coordination Acoustique/Musique (IRCAM), Paris, France, and since 1987 has been Professor of Music (Research) at Stanford University. He served as the Master of Ceremonies for the concert program of NIME-01, the inaugural conference on New interfaces for musical expression.

Mathews was a member of the National Academy of Sciences, the National Academy of Engineering and a fellow in the American Academy of Arts and Sciences, the Acoustical Society of America, the IEEE, and the Audio Engineering Society. He held a Silver Medal in Musical Acoustics from the Acoustical Society of America, and the Chevalier de l'ordre des Arts et Lettres, République Française.

The Max portion of the software package Max/MSP is named after him (the MSP portion is named for Miller Puckette, who teaches at UC San Diego).

Mathews died on the morning of 21 April 2011 in San Francisco, California of complications from pneumonia. He was 84. He was survived by his wife, Marjorie, his three sons and six grandchildren.