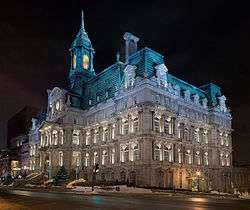 The Mayor of Montreal is head of the executive branch of the Montreal City Council. The current mayor is Denis Coderre, who was elected into office on November 3, 2013, and sworn in on November 14. The office of the mayor administers all city services, public property, police and fire protection, most public agencies, and enforces all city and provincial laws within Montreal. The mayor is directly elected by citizens, by a plurality of votes, for a four-year term (unless a vacancy occurs). The mayor's office is located in Montreal City Hall.

History of the office

The first poll in the history of Montréal was held on the day the first charter of Montréal came into effect – June 3, 1833.[1] 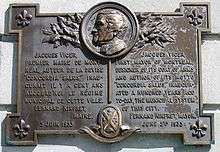 The first coat of arms of Montreal and the motto "Concordia Salus" were adopted on July 19, 1833 as proposed by Viger, incorporating the emblems of the main ethnic groups in the city. The rose represented England, the thistle referred to Scotland, the clover corresponded to Ireland, and the beaver, the French Canadians; this latter was replaced by the fleur de lys in 1938.[2]

In 1851 city council decided to provide the first magistrate of the city with a sumptuous chain; it is an old English practice. The coat of arms of Montreal figured prominently in the centre of the gold chain. On October 2, 1851, that chain was passed on to Mayor Charles Wilson at a ceremony presided over by Lord Elgin, Governor General of Canada. The chain is now worn by each new mayor at the swearing-in ceremony. At the election in February 1852, Wilson became the first mayor elected by citizens.[3]

Starting with the 2009 Montréal municipal election, the mayor of Montreal is also the mayor of the borough of Ville-Marie.

If an incumbent mayor dies in office or resigns, the office is temporarily assumed by the deputy mayor, a position which rotates among different city councillors during the course of a normal council term.[4] In 2012 councillor Jane Cowell-Poitras became acting mayor of the city following the resignation of Gérald Tremblay.[4]

Under provincial law governing municipal election processes, if the vacancy occurs more than one year before the next regularly scheduled municipal election, then a by-election is held to choose the replacement mayor.[4] However, if the vacancy occurs less than a year before the next election, council has up to 30 days to hold an internal vote to choose one of its own members as the new mayor until the regular election.[4] As Tremblay's resignation occurred less than a year before the 2013 municipal election, his formal successor Michael Applebaum was chosen by the latter method, in a vote which took place on November 16.[5] Applebaum resigned on June 18, 2013, and Cowell-Poitras again became acting mayor until Laurent Blanchard was selected in a council vote on June 25.