The Demographics of Montreal concern population growth and structure for Montreal, Quebec, Canada. The information is analyzed by Statistics Canada and compiled every five years, with the most recent census having taken place in 2011. 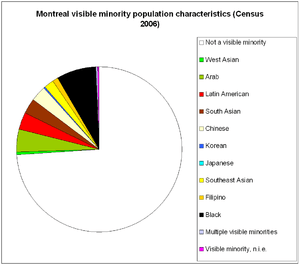 Some 26% of the population of Montreal and 16.5% that of Greater Montreal, are members of a visible minority (non-white) group.[11] Blacks contribute to the largest minority group, with Montreal having the 2nd highest number of Blacks in Canada after Toronto. Other groups, such as Arabs, Latin Americans, South Asians, and Chinese are also large in number.[12] "[11][13] Visible minorities are defined by the Canadian Employment Equity Act as "persons, other than Aboriginals, who are non-Caucasian in race or non-white in colour."[14]

Montreal is the cultural centre of Quebec, French-speaking Canada and French-speaking North America as a whole, and an important city in the Francophonie. The majority of the population is francophone. Montreal is the largest French-speaking city in North America, and second in the world after Paris when counting the number of native-language Francophones (third after Paris and Kinshasa when counting second-language speakers). The city is a hub for French language television productions, radio, theatre, circuses, performing arts, film, multimedia and print publishing.

Montreal plays a prominent role in the development of French-Canadian and Québécois culture. Its contribution to culture is therefore more of a society-building endeavour rather than limited to civic influence. The best talents from French Canada and even the French-speaking areas of the United States converge in Montreal and often perceive the city as their cultural capital. Montreal is also the most important stop in the Americas for Francophone artists from Europe, Africa and Asia.

The cultural divide between Canada's Francophone and Anglophone culture is strong and was famously referred to as the "Two Solitudes" by Canadian writer Hugh MacLennan. Reflecting their deep-seated colonial roots, the Solitudes were historically strongly entrenched in Montreal, splitting the city geographically at Saint Laurent Boulevard.

Some 30 years after the adoption of the Charter of the French Language, French is the mandated lingua-franca of Montreal's various cultural communities. There are effectively two distinct kinds of English spoken in Montréal; the standard English, with its local idioms and eccentricities, passed down through Anglophone community and its institutions. Then there is 'frenglish' or 'franglais' - a highly malleable combination of both languages into cogent sentences, thoughts and expressions, well-seasoned with local slang borrowed (and often used inter-changeably) from both principal languages. The rate of bilingualism among Montréal Anglophones is estimated to be in excess of 67% with a rapidly growing number among them able to speak three or more languages. It is now common to hear the children of Vietnamese, Italian, Haitian and Arab immigrants speaking French with a distinct Québécois accent, as well as English and their own mother tongues.

While socio-cultural differences and a demonstrable general income disparity between Anglophones and Francophones have led to violence in the past, contemporary Montréal is home to a diverse collection of cultures and peoples who live together quite amicably. Montréal, like many American and Canadian cities, has experienced racial and cultural conflicts during the same specific periods of time as other cities such as the increased racial and linguistic tensions towards the late-1980s and early-1990s, concurrent with similar periods of racial violence in New York City or Los Angeles, or in the late-1960s and early-1970s, at the height of the Civil Rights Era, when Montréal was beset with strikes, armed confrontations with revolutionaries, occupations etc.

Montreal's Italian community is one of the largest in Canada, second only to Toronto. With 250,000 residents of Italian ancestry, Montreal has many Italian districts, such as Little Italy, Saint-Leonard (Città Italiana), R.D.P., and LaSalle. Italian is the 3rd most spoken language in Montreal and in the province of Quebec. There is such a large number of Italian Canadians in Montreal that when Italy won the 2006 FIFA World Cup, the number of Italian Montrealers taking to the streets to celebrate en masse resulted in the closure of many major streets, such as Saint Lawrence Boulevard.

Additional West Indian women, from both the Francophone and Anglophone Caribbean, came to Montreal after the Domestic Immigration Program of 1955 was established.[19] Most settled in Little Burgundy.

According to CH (Montreal's multicultural channel) there are now over 117,000 people of Arab origin in Montreal. Montreal has sizeable communities of Lebanese, Moroccan, Syrian and Egyptian origin. The main Arab district is the borough of St. Laurent, which contains an Arab population of about 32,000 (52 percent of the population).

In 1931 the Syro-Lebanese were the largest non-French and non-British ethnic group in Ville Marie.[22]

According to the 2011 Census there were 190,275 Canadians who claimed Lebanese ancestry, with the largest concentration in Montreal, making them by far the largest group of people with Arabic-speaking roots.

As of the 2001 Canadian Census there were over 16,000 Canadians of Moroccan descent in Montreal, about 75% of the total Moroccan population of Canada.[23]

In 1931 the largest non-French, non-British ethnic group in St. Eusebe and St. Gabriel was the Poles.[22]

In 1931 the largest non-French, non-British ethnic group in Cremaizi was the Czecho-Slovaks.[22]

In 1931 the largest non-French, non-British ethnic group in St. Marie was the Lithuanians.[22]

In 1931 the largest non-French, non-British ethnic group in St. Georges was the Finns.[22] 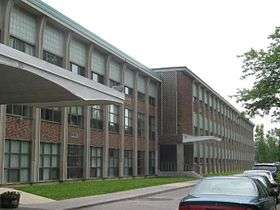 There are Armenian community institutions such as schools, youth organizations, and churches. The authors of "The Chameleon Character of Multilingual Literacy Portraits: Researching in "Heritage" Language Places and Spaces" wrote that in Montreal "there is no recognizable materially bounded Armenian neighborhood".[25] As of 2005 there are three Armenian schools in Montreal, one of which is a day school,[26] L'École Arménienne Sourp Hagop.

The Armenians first settled Canada in 1880. The first Armenian community in Montreal originally had 225 people.[24]

As of 2005 there were an estimated 2,360 ethnic Japanese in Montreal.[27] As of 2003 there was no particular place where ethnic Japanese were concentrated,[28] E. Bourgault wrote in Perspectives on the Japanese Canadian Experience in Quebec (Repartir a Zero; Perspectives sur/ L’Experience des Canadiens d’Origine Japonaise au Quebec) that Japanese in Montreal historically "lived relatively anonymously" and that they "have avoided visible concentration as a collective, hoping to blend in, unnoticed into the larger population."[29]

Greek is the eighth language in importance. The Greek community remains vibrant: several neighbourhoods contain a number of Greek-owned businesses and local festivals and churches add to the multicultural character of the city. The neighbouring city of Laval also has a sizable Greek community, predominantly residing in the borough of Chomedey.

As of 2006 Montreal has Canada's third largest ethnic Chinese population at 72,000 members.[30] As of 2005 there is an estimate of 42,765 ethnic Chinese in Montreal. Of the ethnic minorities, the Chinese are the fourth largest. National origins include Hong Kong, Taiwan, Southeast Asia, and Singapore.[31]

The South Shore suburb of Brossard in particular has a high ethnic Chinese population, at 12% of its population.[32] Montreal also has a small Chinatown sandwiched in between Old Montreal, the Quartier international and downtown.

Epoch Times is the most widely distributed Chinese language newspaper in Great Montreal area. Several Chinese-language special schools are in Montreal.[33] The Montreal Chinese Hospital is located in the city.

Montreal is host to the second largest Latin American community in Canada at 75,400 (Toronto ranks first, with 99,290). The majority of Latin American Canadians are recent immigrants arriving in the late 20th century who have come from El Salvador, Colombia, Mexico, Chile and Guatemala with relatively smaller communities from the Dominican Republic, Cuba, Venezuela, Nicaragua and Ecuador.[34] Spanish is currently the fifth most spoken language in Montreal.

On the other hand, the city is also home to 4,425 Brazilians who are part of the Portuguese-speaking community of Montreal.[35]

Especially from Algeria and Morocco, this immigration is recent and almost 50,000 Berbers live in Montreal.

As of 1999 in Montreal duan chee give active help in resolving emotional issues with Khmer women, while this is not the case with duan chee in Toronto.[38]

Montreal's Jewish community is one of the oldest and most populous in the country, formerly first but now second to Toronto and numbering about 100,000 according to the 2001 census. The community is quite diverse, and is composed of many different Jewish ethnic divisions that arrived in Canada at different periods of time and under differing circumstances.

The Greater Montreal Area is predominantly Roman Catholic; however, weekly church attendance in Quebec is among the lowest in Canada.[44] Historically Montreal has been a centre of Catholicism in North America with its numerous seminaries and churches, including the Notre-Dame Basilica, the Cathédrale Marie-Reine-du-Monde, and Saint Joseph's Oratory. Some 65.8% of the total population is Christian,[45] largely Roman Catholic (52.8%), primarily due to descendants of original French settlers, and others of Italian and Irish origins. Protestants which include Anglican, United Church, Lutheran, owing to British and German immigration, and other denominations number 5.90%, with a further 3.7% consisting mostly of Orthodox Christians, fuelled by a large Greek population. There is also a number of Russian and Ukrainian Orthodox parishes. Islam is the largest non-Christian religious group, with 154,540 members,[46] the second-largest concentration of Muslims in Canada at 9.6%. The Jewish community in Montreal has a population of 35,785. In cities such as Côte Saint-Luc and Hampstead, Jewish people constitute the majority, or a substantial part of the population. As recently as 1971 the Jewish community in Greater Montreal was as high as 109,480.[3] Political and economic uncertainties led many to leave Montreal and the province of Quebec.[47]

The religious breakdown of the population of Montreal is:[45]