Mea She'arim (Hebrew: מאה שערים‎, lit. "hundred gates"; contextually "a hundred fold") is one of the oldest Jewish neighborhoods in Jerusalem, Israel. It is populated mainly by Haredi Jews and was built by the Old Yishuv. 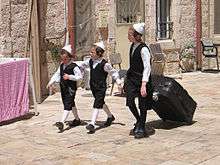 The name Mea Shearim is derived from a verse in the weekly Torah portion which was read the week the settlement was founded: "Isaac sowed in that land, and in that year he reaped a hundredfold (מאה שערים, mea shearim); God had blessed him" (Genesis 26:12). According to a tradition, the community originally had 100 gates, another meaning of mea shearim.[1]

Conrad Schick, a German Christian architect and missionary, drew up a plan for Mea Shearim in 1846. Mea Shearim was established in 1874 as one of the earliest Jewish settlements outside the walls of the Old City by a building society of 100 shareholders.[2] Pooling their resources, the society members purchased a tract of land outside the Old City, which was severely overcrowded and plagued by poor sanitation, and built a new neighborhood with the goal of improving their standards of living.

Yosef Rivlin, one of the heads of the Jewish community in Jerusalem, and a Christian Arab from Bethlehem were the contractors. The work was carried out by both Jewish and non-Jewish workers.[3] 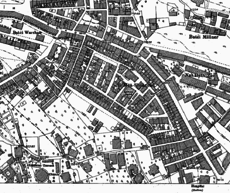 Mea Shearim was structured as a courtyard neighborhood. It was surrounded by a wall, with gates that were locked every evening. By October 1880, 100 apartments were ready for occupancy and a lottery was held to assign them to families. By the turn of the century, there were 300 houses, a flour mill and a bakery. Conrad Schick planned for open green space in each courtyard, but cowsheds were built instead. Mea Shearim was the first quarter in Jerusalem to have street lights.[3]

Incidents in the neighbourhood

Residents have been criticized for attacking police, and other government officials entering the area with stones, and blocking the streets, or setting fire to rubbish when they try to do so (otherwise known as Hafganahs) .[4]

A small, violent, group called "The Sikrikim" of less than 100 families enforce censorship on bookshops, causing over 250,000 NIS damage to a shop that resisted their demands.[5]

In April 2015, an IDF officer was attacked by men and women of Mea Shearim who allegedly threatened to kill him, while children blocked his exit. The incident received national attention. The attack was condemned by Prime Minister Benjamin Netanyahu as “outrageous,” and by Shas leader Arye Deri as “an act of terror.”[6] 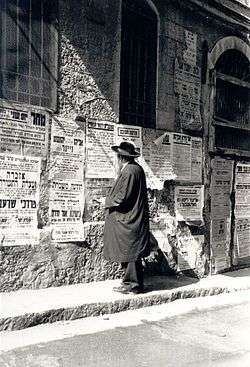 A wall plastered with pashkevilin (announcements) in Mea Shearim.

Today, Mea Shearim remains an insular neighbourhood in the heart of Jerusalem.[3] With its Haredi and overwhelmingly Hasidic population, the streets retain the flavor of an Eastern European shtetl.[1] Life revolves around strict adherence to Jewish law, prayer, and the study of Jewish religious texts. Traditions in dress include black frock coats and black hats for men (although there are some other clothing styles, depending on the religious sub-group to which they belong), and long-sleeved, modest clothing for women. In some Hasidic groups, the women wear thick black stockings all year long, even in summer. Married women wear a variety of hair coverings, from wigs to scarves and snoods. The men have beards, and many grow long sidecurls, called peyos. The residents speak Yiddish in their daily lives, and use Hebrew only for prayer and religious study, as they believe Hebrew to be a sacred language only to be used for religious purposes.[7]

Hasidic groups with a large number of followers in Mea Shearim include: Breslov, Slonim, Toldos Aharon, Toldos Avraham Yitzchak, Mishkenos HaRoim, and Satmar. The Pinsk-Karlin dynasty also has its center here. The Edah HaChareidis, which supervises kashrut certification and runs a Jewish religious court, has its headquarters at the western end of Mea Shearim. Mea Shearim is the stronghold of both factions of the Neturei Karta movement, as well as the movement whence they sprang, the descendants of the original Perushim community, also known as "Yerushalmis". Some residents have asked to live under Arab rule.[8] The late Rabbi Yosef Shalom Eliashiv, the leading posek of Litvish/Yeshivish Jewry, made his home here. 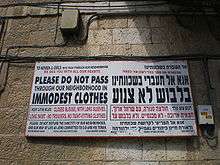 "Modesty" posters in Hebrew and English are hung at every entrance to Mea Shearim. When visiting the neighborhood, women and girls are urged to wear what is deemed to be modest dress (knee-length skirts or longer, no plunging necklines or midriff tops, no sleeveless blouses or bare shoulders) and tourists are requested not to arrive in large, conspicuous groups. During Shabbat (from sunset Friday until it is completely dark on Saturday night), visitors are asked to refrain from smoking, photography, driving or use of mobile phones. When entering synagogues, men are asked to cover their heads.[9]