The Leftovers is an American television drama series created by Damon Lindelof and Tom Perrotta, airing on HBO. It is based on Perrotta's novel of the same name.[1] The pilot was written by Lindelof and Perrotta, and directed by Peter Berg.[2] The series stars an ensemble cast featuring Justin Theroux, Amy Brenneman, Christopher Eccleston, Liv Tyler, Chris Zylka, Margaret Qualley, Carrie Coon, and Ann Dowd. The series premiered on HBO on June 29, 2014[3] and was renewed for a second season, which premiered on October 4, 2015; and concluded December 6, 2015.[4][5] On December 10, 2015, HBO renewed the show for a third and final season,[6] which is scheduled to premiere in 2017.[7]

The Leftovers takes place three years after a global event called the "Sudden Departure", the inexplicable, simultaneous disappearance of 140 million people, 2% of the world's population, on October 14, 2011.[8] Following that event, mainstream religions declined, and a number of cults emerged, most notably the Guilty Remnant.[9]

The story focuses primarily on the Garvey family and their acquaintances in the fictional town of Mapleton, New York. Kevin Garvey is the Chief of Police. His wife Laurie has joined the Guilty Remnant. Their son Tommy has left home for college, and their daughter Jill is acting out.[1] The second season moves the main characters to the fictional town of Jarden, Texas.

HBO acquired rights for series development with Perrotta attached as writer/executive producer and Ron Yerxa and Albert Berger as executive producers in August 2011, shortly before the book came out.[10]

In June 2012, Damon Lindelof was announced to be developing the series alongside Perrotta, and serves as the series' showrunner.[1]

The pilot was ordered in February 2013.[11] On September 16, 2013, HBO announced that they were taking The Leftovers to series, ordering a 10-episode first season.[12] The Leftovers is the first HBO series to be acquired from an outside studio, Warner Bros. Television, and not solely produced in-house by HBO (though parent company Time Warner owns both).[13] 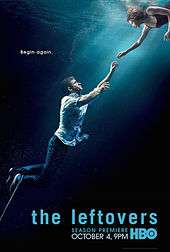 The first season covers the entirety of the book; the second season is completely original material.[14] In April 2015, it was reported that the setting for the second season would shift from Mapleton, New York to a small town in Texas.[15] The series shifted filming locations from New York to Austin, Texas, with nearby Lockhart serving as the mainstreet of fictional Jarden, Texas, when principal photography commenced in late April.[16][17] For the second season, which features several changes, including cast, location, and storylines; Lindelof cited The Wire and Friday Night Lights as influences.[18][19]

The final season began principal photography in early May 2016, in Austin.[20] In June 2016, the production moved to Melbourne, Victoria, Australia, where it will film the remainder of the series, and complete post-production. On the move to Melbourne, Lindelof said, "We're immensely grateful for the opportunity to try something that looks and feels different from the preceding seasons and we absolutely cannot wait to bring our story to its conclusion down under."[21][22] It was also confirmed that the season would have a shortened 8-episode run.[23]

For the second season, eight of the 14 main cast members from season one returned,[5] while Emily Meade, Amanda Warren, Annie Q., Max Carver, Charlie Carver and Michael Gaston did not.[27] In April 2015, casting began for a Black American family comprising a father, ex-convict John Murphy; his hearing impaired doctor wife, Erika; and their teenage children Evie, an outgoing athlete, and Michael, a pious Christian.[15] The roles of John, Erika, and Michael are portrayed by Kevin Carroll, Regina King and Jovan Adepo, respectively, all as series regulars.[28][29] Darius McCrary was cast in a recurring role as Isaac Rayney, John's friend and a palm reader.[29] Steven Williams was cast in a recurring role, playing Virgil, a confidant of Kevin's.[30] Janel Moloney, who had a recurring role in the first season as Mary Jamison, was promoted to a regular cast member in season two.[5]

For the third season, it was confirmed in May 2016 that the entire main cast from the second season would return, with the exception of Dowd, and that Scott Glenn and Jasmin Savoy-Brown had been promoted to series regulars.[23]

Season one of The Leftovers received mostly positive reviews from critics. Metacritic scored season one 65 out of 100, based on 42 critics, indicating "generally favorable reviews".[31] Rotten Tomatoes scored the season 81%, based on 60 reviews, with an average rating of 7.7/10. The site's critical consensus reads, "Its dour tone and self-seriousness may make for somber viewing, but The Leftovers is an artfully crafted, thought-provoking drama that aims high and often hits its mark."[32] IGN reviewer Matt Fowler gave consistently high scores to all the season one episodes, including two perfect 10 scores for "Two Boats and a Helicopter" and the season finale "The Prodigal Son Returns."[33] He then gave the entire first season a review score of 9.4 out of 10, particularly praising the character-centric episodes, Max Richter's score and the performances, particularly Carrie Coon's.[34]

Season two received critical acclaim. On Metacritic, it has a score of 80 out of 100 based on 22 reviews, indicating "generally favorable reviews".[35] Rotten Tomatoes gave the second season a rating of 93% with an average score of 8.7 out of 10 based on 32 critic reviews, with the critical consensus "The Leftovers continues to be unpredictable and provocative in season two with its new location, though the inexplicable circumstances will still frustrate many viewers."[36] Alan Sepinwall of HitFix gave it an "A" grade and wrote that "The Leftovers is still TV's best drama as season 2 begins"; it has "tighter focus, but same powerful, immersive experience".[37] In his five out of five star review, Todd VanDerWerff of Vox wrote: "It's a show that wants to provoke a reaction in you, whether it's admiration, hatred, or just bafflement. It's HBO's best drama—and thus must-see TV."[38]