For other uses, see Broch (disambiguation). 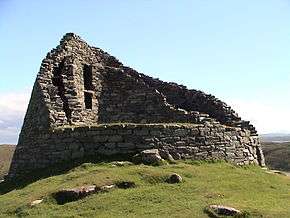 A broch (pronunciation: /ˈbrɒx/) is an Iron Age drystone hollow-walled structure of a type found only in Scotland. Brochs belong to the classification "complex atlantic roundhouse" devised by Scottish archaeologists in the 1980s. Their origin is a matter of some controversy. The theory that they were defensive military structures (an Iron Age equivalent to the castles and tower houses of medieval Scotland) is not accepted by many modern archaeologists (see the 'general references' below), while the alternative notion that they were farmhouses is dismissed by some others. Although most stand alone in the landscape, some examples exist of brochs surrounded by clusters of smaller dwellings.

The word broch is derived from Lowland Scots 'brough', meaning (among other things) fort. In the mid-19th century Scottish antiquaries called brochs 'burgs', after Old Norse borg, with the same meaning. Place names in Scandinavian Scotland such as Burgawater and Burgan show that Old Norse borg is the older word used for these structures in the north. Brochs are often referred to as 'duns' in the west. Antiquaries began to use the spelling 'broch' in the 1870s.

A precise definition for the word has proved elusive. Brochs are the most spectacular of a complex class of roundhouse buildings found throughout Atlantic Scotland. The Shetland Amenity Trust lists about 120 sites in Shetland as candidate brochs, while the Royal Commission on the Ancient and Historical Monuments of Scotland (RCAHMS) identifies a total of 571 candidate broch sites throughout the country. Researcher Euan MacKie has proposed a much smaller total for Scotland of 104.[1] 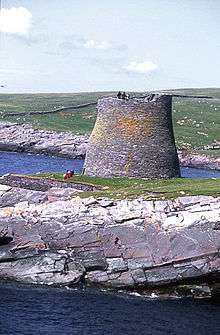 The origin of brochs is a subject of continuing research. Sixty years ago most archaeologists believed that brochs, usually regarded as the 'castles' of Iron Age chieftains, were built by immigrants who had been pushed northward after being displaced first by the intrusions of Belgic tribes into what is now southeast England at the end of the second century BC and later by the Roman invasion of southern Britain beginning in AD 43. Yet there is now little doubt that the hollow-walled broch tower was purely an invention in what is now Scotland; even the kinds of pottery found inside them that most resembled south British styles were local hybrid forms. The first of the modern review articles on the subject (MacKie 1965)[2] did not, as is commonly believed, propose that brochs were built by immigrants, but rather that a hybrid culture formed from the blending of a small number of immigrants with the native population of the Hebrides produced them in the first century BC, basing them on earlier, simpler, promontory forts. This view contrasted, for example, with that of Sir Lindsay Scott, who argued,[3] following Childe (1935),[4] for a wholesale migration into Atlantic Scotland of people from southwest England.

MacKie's theory has fallen from favour too, mainly because starting in the 1970s there was a general move in archaeology away from 'diffusionist' explanations towards those pointing to exclusively indigenous development. Meanwhile, the increasing number – albeit still pitifully few – of radiocarbon dates for the primary use of brochs (as opposed to their later, secondary use) still suggests that most of the towers were built in the 1st centuries BC and AD.[5] A few may be earlier, notably the one proposed for Old Scatness Broch in Shetland, where a sheep bone dating to 390–200 BC has been reported.[6] The other broch claimed to be substantially older than the 1st century BC is Crosskirk in Caithness, but a recent review of the evidence suggests that it cannot plausibly be assigned a date earlier than the 1st centuries BC/AD[7][8] 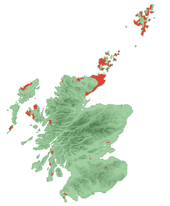 Overview of the distribution of brochs.

The distribution of brochs is centred on northern Scotland. Caithness, Sutherland and the Northern Isles have the densest concentrations, but there are also a great many examples in the west of Scotland and the Hebrides.

Although mainly concentrated in the northern Highlands and the Islands, a few examples occur in the Borders (for example Edin's Hall Broch and Bow Castle Broch); on the west coast of Dumfries and Galloway; and near Stirling. In a c.1560 sketch there appears to be a broch by the river next to Annan Castle in Dumfries and Galloway.[9] This small group of southern brochs has never been satisfactorily explained. 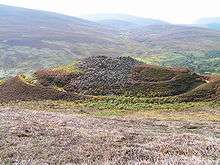 The remains of Kilphedir broch, Sutherland, are surrounded by massive earthworks.

The original interpretation of brochs, favoured by nineteenth century antiquarians, was that they were defensive structures, places of refuge for the community and their livestock. They were sometimes regarded as the work of Danes or Picts.

From the 1930s to the 1960s, archaeologists like V. Gordon Childe and later John Hamilton[10] regarded them as castles where local landowners held sway over a subject population.

The castle theory fell from favour among Scottish archaeologists in the 1980s, due to a lack of supporting archaeological evidence. These archaeologists suggested that defensibility was never a major concern in the siting of a broch, and argued that they may have been the "stately homes" of their time, objects of prestige and very visible demonstrations of superiority for important families (Armit 2003). Once again, however, there is a lack of archaeological proof for this reconstruction, and the sheer number of brochs, sometimes in places with a lack of good land, makes it problematic.

Brochs' close groupings and profusion in many areas may indeed suggest that they had a primarily defensive or even offensive function. Some of them were sited beside precipitous cliffs and were protected by large ramparts, artificial or natural: a good example is at Burland near Gulberwick in Shetland, on a clifftop and cut off from the mainland by huge ditches. Often they are at key strategic points. In Shetland they sometimes cluster on each side of narrow stretches of water: the broch of Mousa, for instance, is directly opposite another at Burraland in Sandwick. In Orkney there are more than a dozen on the facing shores of Eynhallow Sound, and many at the exits and entrances of the great harbour of Scapa Flow. In Sutherland quite a few are placed along the sides and at the mouths of deep valleys. Writing in 1956 John Stewart suggested that brochs were forts put up by a military society to scan and protect the countryside and seas.[11]

Finally, some archaeologists consider broch sites individually, doubting that there ever was a single common purpose for which every broch was constructed. There are differences between the various areas in which brochs are found, with regard to position, dimensions and likely status. For example, the broch 'villages' which occur at a few places in Orkney have no parallel in the Western Isles.

Generally, brochs have a single entrance with bar-holes, door-checks and lintels. There are mural cells and there is a scarcement (ledge), perhaps for timber-framed lean-to dwellings lining the inner face of the wall. Also there is a spiral staircase winding upwards between the inner and outer wall and connecting the galleries.[12] Brochs vary from 5 to 15 metres (16–50 ft) in internal diameter, with 3 metre (10 ft) thick walls. On average, the walls only survive to a few metres in height. There are five extant examples of towers with significantly higher walls: Dun Carloway on Lewis, Dun Telve and Dun Troddan in Glenelg, Mousa in Shetland and Dun Dornaigil in Sutherland, all of whose walls exceed 6.5 m (21 ft) in height.[13] Mousa's walls are the best preserved and are still 13 m tall; it is not clear how many brochs originally stood this high. A frequent characteristic is that the walls are galleried: with an open space between, the outer and inner wall skins are separate but tied together with linking stone slabs; these linking slabs may in some cases have served as steps to higher floors. It is normal for there to be a cell breaking off from the passage beside the door; this is known as the guard cell. It has been found in some Shetland brochs that guard cells in entrance passageways are close to large door-check stones. Though there was much argument in the past, it is now generally accepted among archaeologists that brochs were roofed, perahps with a conical timber framed roof covered with a locally sourced thatch. The evidence for this assertion is still fairly scanty, though excavations at Dun Bharabhat, Lewis, may support it. The main difficulty with this interpretation continues to be the potential source of structural timber, though bog and driftwood may have been plentiful sources. 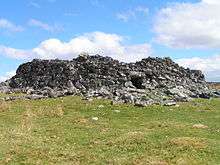 The remains of Feranch broch, Sutherland

On the islands of Orkney and Shetland there are very few cells at ground floor. Most brochs have scarcements (ledges) which may have allowed the construction of a very sturdy wooden first floor (first spotted by the antiquary George Low in Shetland in 1774), and excavations at Loch na Berie on the Isle of Lewis show signs of a further, second floor (e.g. stairs on the first floor, which head upwards). Some brochs such as Dun Dornaigil and Culswick in Shetland have unusual triangular lintels above the entrance door.[14][15]

As in the case of Old Scatness in Shetland (near Jarlshof and Burroughston on Shapinsay), brochs were sometimes located close to arable land and a source of water (some have wells or natural springs rising within their central space).[16] Sometimes, on the other hand, they were sited in wilderness areas (e.g. Levenwick and Culswick in Shetland, Castle Cole in Sutherland). Brochs are often built beside the sea (Carn Liath, Sutherland); sometimes they are on islands in lochs (e.g. Clickimin in Shetland).

About 20 Orcadian broch sites include small settlements of stone buildings surrounding the main tower. Examples include Howe, near Stromness, Gurness Broch in the north west of Mainland, Orkney, Midhowe on Rousay and Lingro near Kirkwall (destroyed in the 1980s). There are "broch village" sites in Caithness, but elsewhere they are unknown.[17]

Most brochs are unexcavated.[18] Those that have been properly examined show that they continued in use for many centuries, with the interiors often modified and changed, and that they underwent many phases of habitation and abandonment. The end of the broch period seems to have come around AD 200–300. 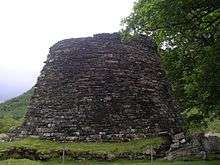 Mousa, Old Scatness and Jarlshof: The Crucible of Iron Age Shetland is a combination of three broch sites in Shetland that are on the United Kingdom "Tentative List" of possible nominations for the UNESCO World Heritage Programme list of sites of outstanding cultural or natural importance to the common heritage of humankind. This list, published in July 2010, includes sites that may be nominated for inscription over the next 5–10 years.[19]