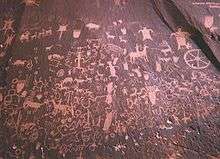 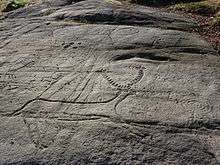 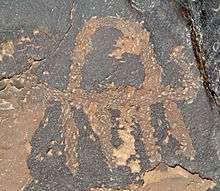 Modern rock relief of Decebalus, king of the Dacians 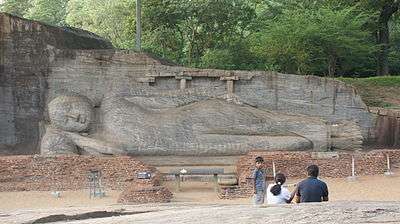 Reclining Buddha at Gal Vihara, Sri Lanka. The remains of the image house that originally enclosed it can be seen.

Petroglyphs are images created by removing part of a rock surface by incising, picking, carving, or abrading, as a form of rock art. Outside North America, scholars often use terms such as "carving", "engraving", or other descriptions of the technique to refer to such images. Petroglyphs are found world-wide, and are often associated with prehistoric peoples. The word comes from the Greek word petro-, theme of the word "petra" meaning "stone", and glyphein meaning "to carve", and was originally coined in French as pétroglyphe.

The term petroglyph should not be confused with petrograph, which is an image drawn or painted on a rock face. Both types of image belong to the wider and more general category of rock art or parietal art. Petroforms, or patterns and shapes made by many large rocks and boulders over the ground, are also quite different. Inukshuks are also unique, and found only in the Arctic (except for reproductions and imitations built in more southerly latitudes).

A more developed form of petroglyph, normally found in literate cultures, a rock relief or rock-cut relief is a relief sculpture carved on solid or "living rock" such as a cliff, rather than a detached piece of stone. They are a category of rock art, and sometimes found in conjunction with rock-cut architecture.[1] However, they tend to be omitted in most works on rock art, which concentrate on engravings and paintings by prehistoric peoples. A few such works exploit the natural contours of the rock and use them to define an image, but they do not amount to man-made reliefs. Rock reliefs have been made in many cultures, and were especially important in the art of the Ancient Near East.[2] Rock reliefs are generally fairly large, as they need to be to make an impact in the open air. Most have figures that are over life-size, and in many the figures are multiples of life-size.

Stylistically they normally relate to other types of sculpture from the culture and period concerned, and except for Hittite and Persian examples they are generally discussed as part of that wider subject.[3] The vertical relief is most common, but reliefs on essentially horizontal surfaces are also found. The term typically excludes relief carvings inside caves, whether natural or themselves man-made, which are especially found in India. Natural rock formations made into statues or other sculpture in the round, most famously at the Great Sphinx of Giza, are also usually excluded. Reliefs on large boulders left in their natural location, like the Hittite İmamkullu relief, are likely to be included, but smaller boulders may be called stele or carved orthostats. 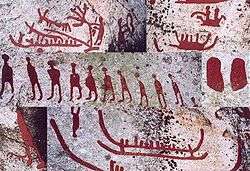 Composite image of petroglyphs from Scandinavia (Häljesta, Västmanland in Sweden). Nordic Bronze Age. The glyphs have been painted to make them more visible. 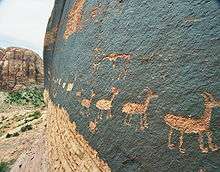 A petroglyph of a caravan of bighorn sheep near Moab, Utah, United States; a common theme in glyphs from the desert southwest

Some petroglyphs are dated to approximately the Neolithic and late Upper Paleolithic boundary, about 10,000 to 12,000 years ago, if not earlier (Kamyana Mohyla). Sites in Australia have petroglyphs that are estimated to be as much as 27,000 years old, and in other places could be as old as 40,000 years. Around 7,000 to 9,000 years ago, other precursors of writing systems, such as pictographs and ideograms, began to appear. Petroglyphs were still common though, and some cultures continued using them much longer, even until contact with Western culture was made in the 20th century. Petroglyphs have been found in all parts of the globe except Antarctica with highest concentrations in parts of Africa, Scandinavia, Siberia, southwestern North America and Australia.

There are many theories to explain their purpose, depending on their location, age, and the type of image. Some petroglyphs are thought to be astronomical markers, maps, and other forms of symbolic communication, including a form of "pre-writing". Petroglyph maps may show trails, symbols communicating time and distances traveled, as well as the local terrain in the form of rivers, landforms and other geographic features. A petroglyph that represents a landform or the surrounding terrain is known as a geocontourglyph. They might also have been a by-product of other rituals: sites in India, for example, have been identified as musical instruments or "rock gongs".[4]

Some petroglyph images probably have deep cultural and religious significance for the societies that created them; in many cases this significance remains for their descendants. Many petroglyphs are thought to represent some kind of not-yet-fully understood symbolic or ritual language. Later glyphs from the Nordic Bronze Age in Scandinavia seem to refer to some form of territorial boundary between tribes, in addition to possible religious meanings. It also appears that local or regional dialects from similar or neighboring peoples exist. The Siberian inscriptions almost look like some early form of runes, although there is not thought to be any relationship between them. They are not yet well understood.

Some researchers have noticed the resemblance of different styles of petroglyphs across different continents; while it is expected that all people would be inspired by their surroundings, it is harder to explain the common styles. This could be mere coincidence, an indication that certain groups of people migrated widely from some initial common area, or indication of a common origin. In 1853 George Tate read a paper to the Berwick Naturalists' Club, at which a John Collingwood Bruce agreed that the carvings had "... a common origin, and indicate a symbolic meaning, representing some popular thought."[5] In his cataloguing of Scottish rock art, Ronald Morris summarised 104 different theories on their interpretation.[6]

Other, more controversial, explanations are grounded in Jungian psychology and the views of Mircea Eliade. According to these theories it is possible that the similarity of petroglyphs (and other atavistic or archetypal symbols) from different cultures and continents is a result of the genetically inherited structure of the human brain.

Other theories suggest that petroglyphs were made by shamans in an altered state of consciousness,[7] perhaps induced by the use of natural hallucinogens. Many of the geometric patterns (known as form constants) which recur in petroglyphs and cave paintings have been shown by David Lewis-Williams to be "hard-wired" into the human brain; they frequently occur in visual disturbances and hallucinations brought on by drugs, migraine and other stimuli.

Present-day links between shamanism and rock art amongst the San people of the Kalahari desert have been studied by the Rock Art Research Institute (RARI) of the University of the Witwatersrand.[10] Though the San people's artworks are predominantly paintings, the beliefs behind them can perhaps be used as a basis for understanding other types of rock art, including petroglyphs. To quote from the RARI website:

Using knowledge of San beliefs, researchers have shown that the art played a fundamental part in the religious lives of its San painters. The art captured things from the San’s world behind the rock-face: the other world inhabited by spirit creatures, to which dancers could travel in animal form, and where people of ecstasy could draw power and bring it back for healing, rain-making and capturing the game.

Republic of the Congo 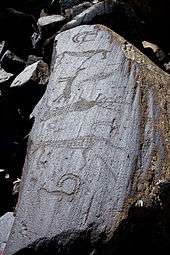 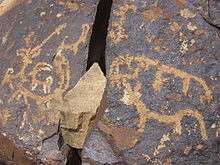 During recent years a large number of rock carvings has been identified in different parts of Iran. The vast majority depict the ibex.[16][17] 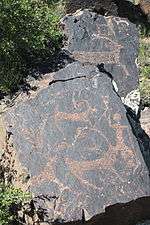 Cup and ring marked rocks in: 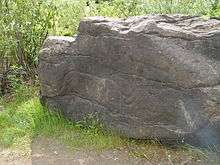 Mammoth on the basalt stone in Sikachi-Alyan, Russia

Central and South America and the Caribbean 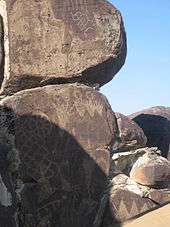 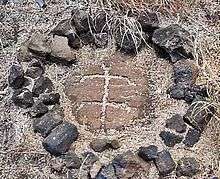 Petroglyph on western coast of Hawaii 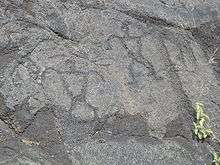 Modern Hopi have interpreted the petroglyphs at Mesa Verde National Park's Petroglyph Point as depictions of the Eagle, Mountain Sheep, Parrot, Horned Toad, and Mountain Lion clans, and the Ancestral Puebloans who inhabited the mesa