Prehistoric warfare refers to war that occurred between societies without recorded history.

The existence — and even definition — of war in humanity's hypothetical state of nature has been a controversial topic in the history of ideas at least since Thomas Hobbes in Leviathan (1651) argued a "war of all against all", a view directly challenged by Jean-Jacques Rousseau in a Discourse on Inequality (1755) and The Social Contract (1762). The debate over human nature continues, spanning contemporary anthropology, archaeology, ethnography, history, political science, psychology, primatology, and philosophy in such divergent books as Azar Gat's War in Human Civilization and Raymond C. Kelly's Warless Societies and the Origin of War.[1][2] For the purposes of this article, "prehistoric war" will be broadly defined as a state of organized lethal aggression between autonomous preliterate communities.[3][4] 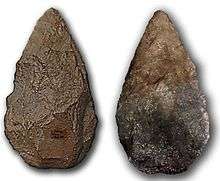 According to cultural anthropologist and ethnographer Raymond C. Kelly, the earliest hunter-gatherer societies of Homo erectus population density was probably low enough to avoid armed conflict. The development of the throwing-spear, together with ambush hunting techniques, made potential violence between hunting parties very costly, dictating cooperation and maintenance of low population densities to prevent competition for resources. This behavior may have accelerated the migration out of Africa of H. erectus some 1.8 million years ago as a natural consequence of conflict avoidance. Although scholars believed that this period of "Paleolithic warlessness" persisted until well after the appearance of Homo sapiens some 0.2 million years ago, ending only at the occurrence of economic and social shifts associated with sedentism, when new conditions incentivized organized raiding of settlements.,[5][6]

Of the many cave paintings of the Upper Paleolithic, none depict people attacking other people.[7][8] The only rock art that depicts violence between hunter-gatherers comes from a unique Northern Australian sequence that began approximately 10,000 years ago.[9] Skeletal and artifactual evidence of intergroup violence between Paleolithic nomadic foragers is absent as well.[8][10]

The most ancient archaeological record of what could be a prehistoric massacre is at the epipaleolithic site of Cemetery 117. The cemetery contains a large number of skeletons that are approximately 13,000 to 14,000 years old, many with arrowheads embedded in their skeletons, which indicates that they may have been the casualties of warfare. Some question that conclusion by arguing that the bodies, which are buried in carefully made graves, may have accumulated over many decades, and may even be evidence of the murder of trespassers rather than actual battles. Nearly half of the bodies are female, and this fact also causes some to question the argument for proper warfare. It has been noted that the violence might have occurred in the wake of a local ecological crisis.[11]

At the site of Nataruk in Turkana, Kenya, numerous 10,000-year-old human remains were found with evidence of major traumatic injuries, including obsidian bladelets embedded in the skeletons, that would have been lethal. The bodies at Nataruk were not interred, but were preserved in the positions the individuals had died at the edge of a lagoon. According to the study that initially published the find, the region was a "fertile lakeshore landscape sustaining a substantial population of hunter-gatherers" where pottery had been found, suggesting storage of food and sedentism.[12][13] Early war was influenced by the development of bows, maces, and slings. The bow seems to have been the most important weapon in early warfare, in that it enabled attacks to be launched with far less risk to the attacker when compared to the risk involved in mêlée combat. While there are no cave paintings of battles between men armed with clubs, the development of the bow is concurrent with the first known depictions of organized warfare consisting of clear illustrations of two or more groups of men attacking each other. These figures are arrayed in lines and columns with a distinctly garbed leader at the front. Some paintings even portray still-recognizable tactics like flankings and envelopments.[14]

A Neolithic society is defined as a society that cultivates domesticated plants and manufactures tools only from natural materials. Evidence indicates that warfare was present in many Neolithic societies.[15] For example, the Talheim Death Pit and Crow Creek Site are sites of Neolithic massacres.[16][17]

The Māori of New Zealand are notable for the thousands of fortifications constructed to enhance a group's standing in the near-continuous fighting on their islands in the South Pacific. In an era before siege weapons had been developed to a high level of technological complexity and when attackers had limited supplies and time to spend in battle, fortifications were a successful method of securing people and livestock from invasion, though the fields and homes would likely be pillaged by the attackers. These substantial fortifications show that there was considerable social organization in the societies of prehistoric peoples. This is indirect corollary evidence for them also having been capable of conducting organized warfare. 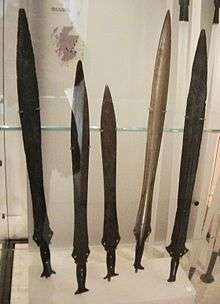 Bronze swords from the Museum of Scotland.

The onset of the Chalcolithic (Copper Age) saw the introduction of copper daggers, axes, and other items. For the most part, these were far too expensive and malleable to be efficient weapons. They are considered by many scholars to have been largely ceremonial implements. It was only with the development of bronze that edged metal weapons became commonplace.

Excavation work undertaken in 2005 and 2006 has shown that Hamoukar was destroyed by warfare by around 3500 BC-—probably the earliest urban warfare attested so far in the archaeological record of the Near East.[18] Continued excavations in 2008 and 2010 expand on that. [19]

Military conquests expanded city states under Egyptian control. Babylonia and later Assyria built empires in Mesopotamia while the Hittite Empire ruled much of Anatolia. Chariots appear in the 20th century BC, and become central to warfare in the Ancient Near East from the 17th century BC. The Hyksos and Kassite invasions mark the transition to the Late Bronze Age. Ahmose I defeated the Hyksos and re-established Egyptian control of Nubia and Canaan, territories again defended by Ramesses II at the Battle of Kadesh, the greatest chariot battle in history. The raids of the Sea Peoples and the renewed disintegration of Egypt in the Third Intermediate Period marks the end of the Bronze Age.

Mycenaean Greeks (c. 1600-1100 BC) invested in the development of military infrastructure, while military production and logistics were supervised directly from the palatial centers.[20] The most identifiable piece of Mycenaean armor was the boar's tusk helmet.[21] In general, most features of the later hoplite panoply of classical Greek antiquity, were already known to Mycenaean Greece.[22]

Early Iron Age events like the Dorian invasion, Greek colonialism and their interaction with Phoenician and Etruscan forces lie within the prehistoric period. Germanic warrior societies of the Migration period engaged in endemic warfare (see also Thorsberg moor). Anglo-Saxon warfare lies on the edge of historicity, its study relying primarily on archaeology with the help of only fragmentary written accounts.

In warlike cultures, war is often ritualized with a number of taboos and practices that limit the number of casualties and the duration of the conflict. This type of situation is known as endemic warfare. Among tribal societies engaging in endemic warfare, conflict may escalate to actual warfare occasionally for reasons such as conflict over resources or for no readily understandable reason.