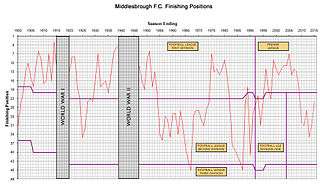 Boro's league positions since entry to the Football League

This list details the club's achievements in all competitions, and the top scorers for each season. Records of competitions such as the North Riding Senior Cup are not included due to them being played against lower league opposition and reserve sides.