The Kirin Cup is an association football tournament organised in Japan by the Kirin Brewery Company. The host, Japan, is a participant in every edition. The tournament was founded in 1978 as an international club competition and was last held in its full form in 2016. From 1992 onwards the format was changed to a round robin national team competition. The first nation to win the competition was Argentina. Japan are the tournament's most successful team with 11 titles, followed by Peru with 3 titles. As of 2016, the current cup holders is Bosnia and Herzegovina national football team.

Since the start of the international competitions in 1992, the tournament has hosted a variety of teams from South America, Europe, Asia, and Africa. Out of the South American CONMEBOL members who have been invited (Argentina, Chile, Colombia, Ecuador, Paraguay, Uruguay and Peru), Peru have been the most successful (3 titles). Out of the European invitees, there have been 7 different champions, the most successful being the Czech Republic with 2 titles, with Hungary, France, Bosnia and Herzegovina, Belgium, Slovakia and Scotland winning one title each. Aside from Japan, the only other Asian country to have won the tournament are the United Arab Emirates (2005), who shared the title with Peru. No African teams have won the tournament (Only one African team has participated in just one edition).

In addition to the annual Kirin Cup there are a few Kirin Challenge Cups, friendlies also sponsored by the Kirin Corporation, played throughout the year in Japan. Japan took out the most recent 2015 Kirin Challenge Cup with 2–0 win over Tunisia on 27 March 2015 and 4–0 win over Iraq on 11 June 2015.

There was no match scheduled between

There was no match scheduled between 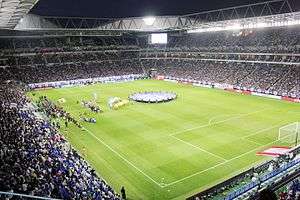 Japan against Bosnia-Herzegovina at Suita City Stadium in Osaka during the final of 2016 Kirin Cup.