This article is about the city in Florida. For other uses, see Hollywood (disambiguation).

For the city in Florida with movie studios similar to Hollywood, Los Angeles, CA, see Orlando.

Hollywood is a city in Broward County, Florida, United States located between Fort Lauderdale and Miami.[5] The average temperature is between 68 and 83 degrees. As of 2013 Hollywood has a population of 146,526. Founded in 1925, the city grew rapidly in the 1950s and 1960s, and is now the twelfth largest city in Florida.[6] Hollywood is a principal city of the Miami metropolitan area, which was home to an estimated 6,012,331 people at the 2015 census.

Joseph W. Young founded the city in 1925. He dreamed of building a motion picture colony on the East Coast of the United States and named the town after Hollywood, California.[7] Young bought up thousands of acres of land around 1920, and named his new town "Hollywood by the Sea" to distinguish it from his other real estate venture, "Hollywood in the Hills", in New York 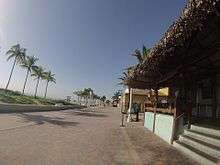 Young had a vision of having lakes, golf courses, a luxury beach hotel, country clubs, and a main street, Hollywood Boulevard.[8] After the 1926 Miami hurricane, Hollywood was severely damaged; local newspapers reported that Hollywood was second only to Miami in losses from the storm.[7] Following upon Young's death in 1934, the city encountered more terrific hurricanes and not only that, but the stock market crashed with personal financial misfortunes.[8] It felt as though the city was tumbling slowly piece by piece with all of those tragic events taking place.

Hollywood is a planned city. On Hollywood Boulevard is the Mediterranean-style Joseph Young Mansion, built around 1921, making it one of the oldest houses in Hollywood.

Hollywood is located in southeastern Broward County, and includes approximately 5 to 6 miles (8.0 to 9.7 km) of Atlantic Ocean beach, interrupted briefly by a portion deeded to Dania Beach. It is bounded by the following municipalities: 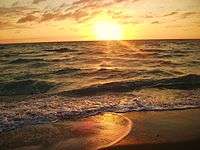 Sun rising over the Atlantic Ocean in Hollywood 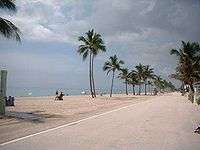 Hollywood is filled with about 60 parks, seven golf courses, and sandy beaches that have sand and that run for miles.

The famous Hollywood Beach is known for its great broadwalk that extends about 2.5 miles along the Atlantic Ocean.[5] Parking is available on side streets or in parking garages for a large fee, and public trolleys run through the day. Countless restaurants and hotels line the broadwalk along with a theatre, children's playground, and many other attractions including bicycle rental shops, ice cream parlors, souvenir shops, and a farmer's market. Many of the restaurants offer outdoor seating for patrons to enjoy the seabreeze and scenery. The broadwalk is vibrant and lively and is a scenic place for walking and jogging; there is also bike lane for bicyclists and rollerbladers. In the evenings, many restaurant and the bandshell off of Johnson Street showcase musicians and spontaneous dancing may occur in the broadwalk.

Young Circle is another exciting area surrounded by dozens of shops, restaurants, and bars. A Food Truck Takeover occurs every Monday, during which dozens of local food trucks park and create an ever-changing opportunity for hungry masses to experience a variety of cuisines; one can expect to see Cuban, Venezuelan, Mediterranean, Mexican, Jamaican, and/or Peruvian foods in addition to barbecue, burgers, gourmet grilled cheese, and dessert trucks.[20]

Prior to their dissolutions, Commodore Cruise Line and its subsidiary Crown Cruise Line had their headquarters in Hollywood.[21]

HEICO has its headquarters in Hollywood.[22]

Since 1991, the Invicta Watch Group, a manufacturer of timepieces and writing instruments, has had its headquarters in Hollywood where it also operates its customer service call center.

According to the City's 2011 Comprehensive Annual Financial Report,[23] the top employers in the city are:

Hollywood is made up of 32 public and charter schools with 13 private schools. The public schools are operated by the Broward County Public Schools.[5]

The city is protected by the Hollywood Police Department.

On May 2, 2016, the Miami Herald reported about "a man from Hollywood," James Muhammad (legal name James Medina), who planned to bomb a synagogue in Aventura, and who was recorded stating "Aventura, watch your back. ISIS is in the house."[27][28]

These are the neighborhoods and communities that are officially recognized by the City of Hollywood.[36][37]

Hollywood is served by Fort Lauderdale-Hollywood International Airport, the 22nd busiest airport in the United States.[38] Broward County Transit operates several bus routes that pass through the city of Hollywood, such as the 1 on US 1 (Federal Highway).[39] It is also served by Tri-Rail stations at Sheridan Street and Hollywood.

Pictured are some of the remaining historic structures of Hollywood:[41][42]