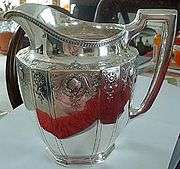 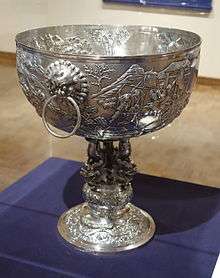 Fine silver, for example 99.9% pure silver, is generally too soft for producing functional objects; therefore, the silver is usually alloyed with copper to give it strength while preserving the ductility and appearance of the precious metal. Other metals can replace the copper, usually with the intention of improving various properties of the basic sterling alloy such as reducing casting porosity, eliminating firescale, and increasing resistance to tarnish. These replacement metals include germanium, zinc and platinum, as well as a variety of other additives, including silicon and boron. Alloys such as argentium silver have appeared in recent decades.

One of the earliest attestations of the term is in Old French form esterlin, in a charter of the abbey of Les Préaux, dating to either 1085 or 1104. The English chronicler Orderic Vitalis (1075 – c. 1142) uses the Latin forms libræ sterilensium and libræ sterilensis monetæ. The word in origin refers to the newly introduced Norman silver penny.

According to the Oxford English Dictionary, the most plausible etymology is derivation from a late Old English steorling (with (or like) a "little star"), as some early Norman pennies were imprinted with a small star. There are a number of obsolete hypotheses. One suggests a connection with starling, because four birds (in fact martlets) were depicted on a penny of Edward I.

Another argument is that the Hanseatic League was the origin for both the origin of its definition and manufacture, and in its name is that the German name for the Baltic is "Ost See", or "East Sea", and from this the Baltic merchants were called "Osterlings", or "Easterlings". In 1260, Henry III granted them a charter of protection. Because the League's money was not frequently debased like that of England, English traders stipulated to be paid in pounds of the Easterlings, which was contracted to sterling.[1] and land for their Kontor, the Steelyard of London, which by the 1340s was also called "Easterlings Hall", or Esterlingeshalle.[2] The Hanseatic League was officially active in the London trade from 1266 to 1597. This etymology may have been first suggested by Walter de Pinchebek (ca. 1300) with the explanation that the coin was originally made by moneyers from that region.[3] The claim has also been made in Henry Spelman's glossary (Glossarium Archaiologicum) as referenced in Commentaries on the Laws of England.[4] Yet another claim on this same hypothesis is from Camden, as quoted in Chamber's Journal of Popular Literature, Science and Arts, Volume 4.[5] By 1854, the tie between Easterling and Sterling was well-established, as Ronald Zupko quotes in his dictionary of weights.[6]

The British numismatist Philip Grierson disagrees with the "star" etymology, as the stars appeared on Norman pennies only for the single three-year issue from 1077–1080 (the Normans changed coin designs every three years). Grierson's proposed alternative is that "sterling" derives from "ster"[note 1] meaning "strong" or "stout", by analogy with the Byzantine solidus, originally known as the solidus aureus meaning "solid gold" or "reliable gold". In support of this he cites the fact that one of the first acts of the Normans was to restore the coinage to the consistent weight and purity it had in the days of Offa, King of Mercia. This would have been perceived as a contrast to the progressive debasement of the intervening 200 years, and would therefore be a likely source for a nickname.[7]

S.E. Rigold disputes the origin being Norman, stating, "that, while medieval British coins seldom copy or are copied by those of France, they have many typological connexions with the lands to the east—the Netherlands, the Baltic, Germany, and even deeper regions of central Europe."[8] 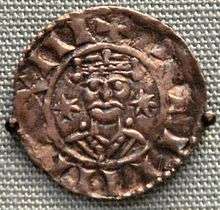 Norman silver pennies changed designs every three years. This two-star design (possible origin of the word "sterling"), issued by William the Conqueror, is from 1077–1080.

The sterling alloy originated in continental Europe and was being used for commerce as early as the 12th century in the area that is now northern Germany.

In England the composition of sterling silver was subject to official assay at some date before 1158, during the reign of Henry II, but its purity was probably regulated from centuries earlier, in Saxon times. A piece of sterling silver dating from Henry II's reign was used as a standard in the Trial of the Pyx until it was deposited at the Royal Mint in 1843. It bears the royal stamp ENRI. REX ("King Henry") but this was added later, in the reign of Henry III. The first legal definition of sterling silver appeared in 1275, when a statute of Edward I specified that 12 ounces of silver for coinage should contain 11 ounces  2 1⁄4 pennyweights of silver and  17 3⁄4 pennyweights of alloy, with 20 pennyweights to the Troy ounce.[9]

In Colonial America, sterling silver was used for currency and general goods as well. Between 1634 and 1776, some 500 silversmiths created items in the “New World” ranging from simple buckles to ornate Rococo coffee pots. Although silversmiths of this era were typically familiar with all precious metals, they primarily worked in sterling silver. The colonies lacked an assay office during this time (the first would be established in 1814), so American silversmiths adhered to the standard set by the London Goldsmiths Company: sterling silver consisted of 91.5 - 92.5% by weight silver and 8.5–7.5 wt% copper.[10] Stamping each of their pieces with their personal maker's mark, colonial silversmiths relied upon their own status to guarantee the quality and composition of their products.[10]

Colonial silversmiths used many of the techniques developed by those in Europe. Casting was frequently the first step in manufacturing silver pieces, as silver workers would melt down sterling silver into easily manageable ingots. Occasionally, they would create small components (e.g. teapot legs) by casting silver into iron or graphite molds, but it was rare for an entire piece to be fabricated via casting.[11] Next, silversmiths would forge the ingots into the shapes they desired, often hammering the thinned silver against specially shaped dies to "mass produce" simple shapes like the oval end of a spoon. This process occurred at room temperature, and thus is called “cold-working”. The repeated strikes of the hammer work hardened (sterling) silver, causing it to become brittle and difficult to manipulate.[11] To combat work-hardening, silversmiths would anneal their pieces—heat it to a dull red and then quench it in water—to relieve the stresses in the material and return it to a more ductile state.[12] Hammering required more time than all other silver manufacturing processes, and therefore accounted for the majority of labor costs.[11] Silversmiths would then seam parts together to create incredibly complex and artistic items, sealing the gaps with a solder of 80 wt% silver and 20 wt% bronze. Finally, they would file and polish their work to remove all seams, finishing off with engraving and a maker’s mark.[13]

The American revolutionary Paul Revere was regarded as one of the best silversmiths from this “Golden Age of American Silver.” Following the Revolutionary War, Revere acquired and made use of a silver rolling mill from England.[14] Not only did the rolling mill increase his rate of production[15]—hammering and flattening silver took most of a silversmith’s time—he was able to roll and sell silver of appropriate, uniform thickness to other silversmiths.[16] He retired a wealthy artisan, his success partly due to this strategic investment. Although he is celebrated for his beautiful hollowware, Revere made his fortune primarily on low-end goods produced by the mill, such as flatware.[17] With the onset of the first Industrial Revolution, silversmithing declined as an artistic occupation.

From about 1840 to 1940 in the United States and Europe, sterling silver cutlery (US: 'flatware') became de rigueur when setting a proper table. There was a marked increase in the number of silver companies that emerged during that period. The height of the silver craze was during the 50-year period from 1870 to 1920. Flatware lines during this period sometimes included up to 100 different types of pieces.

A number of factors converged to make sterling fall out of favor around the time of World War II. The cost of labor rose (sterling pieces were all still mostly handmade, with only the basics being done by machine). Only the wealthy could afford the large number of servants required for fancy dining with ten courses. And changes in aesthetics resulted in people desiring simpler dinnerware that was easier to clean.

This was especially true during the Victorian period, when etiquette dictated no food should be touched with one's fingers.

Other uses of sterling include:

Chemically, silver is not very reactive—it does not react with oxygen or water at ordinary temperatures, so does not easily form a silver oxide. However, it is attacked by common components of atmospheric pollution: silver sulfide slowly appears as a black tarnish during exposure to airborne compounds of sulfur (byproducts of the burning of fossil fuels and some industrial processes), and low level ozone reacts to form silver oxide.[18] As the purity of the silver decreases, the problem of corrosion or tarnishing increases because other metals in the alloy, usually copper, may react with oxygen in the air.

The black silver sulfide (Ag2S) is among the most insoluble salts in aqueous solution, a property that is exploited for separating silver ions from other positive ions.

Sodium chloride (NaCl) or common table salt is known to corrode silver-copper alloy, typically seen in silver salt shakers where corrosion appears around the holes in the top.

Several products have been developed for the purpose of polishing silver that serve to remove sulfur from the metal without damaging or warping it. Because harsh polishing and buffing can permanently damage and devalue a piece of antique silver, valuable items are typically hand-polished to preserve the unique patinas of older pieces. Techniques such as wheel polishing, which are typically performed by professional jewelers or silver repair companies, are reserved for extreme tarnish or corrosion.