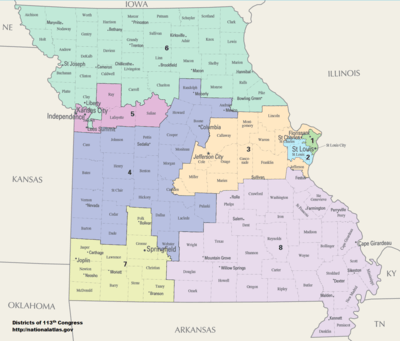 Missouri is currently divided into 8 congressional districts, each represented by a member of the United States House of Representatives.

Due to the 2010 Census Missouri lost a Congressional seat in 2013. Initial redistricting maps show the biggest impact being in the 3rd Congressional District (which includes portions of St. Louis which had large population losses in the Census). The district would effectively become part of the 1st District. The largely rural 9th District, which also suffered population decreases and is being dissolved, would become part of the 6th District north of the Missouri River and part of a redrawn more rural 3rd district south of the river.[2]

List of members of the Missourian United States House delegation, their terms, their district boundaries, and the districts' political ratings according to the CPVI. The delegation has a total of 8 members, including 6 Republicans and 2 Democrats.

Table of United States congressional district boundary maps in the State of Missouri, presented chronologically.[3] All redistricting events that took place in Missouri between 1973 and 2013 are shown.

The following list includes districts which are no longer in use in Missouri, due to Missouri's decrease in population relative to the United States at large in recent times.