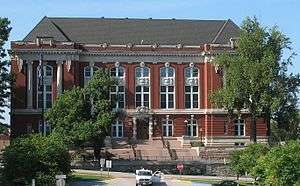 The Supreme Court of Missouri is the highest court in the state of Missouri. It was established in 1820 and is located in Jefferson City, Missouri. Missouri voters have approved changes in the state's constitution to give the Supreme Court exclusive jurisdiction- the sole legal power to hear – five types of cases on appeal. Pursuant to Article V, Section 3 of the Missouri Constitution, these cases involve:

Unless their case involves one of those five issues, people who want a trial court's decision reviewed must appeal to the Missouri Court of Appeals. Most of these cases involve routine legal questions and end there. The Court of Appeals is divided geographically into the Eastern District, Western District and Southern District.

Certain cases, however, can be transferred to the Supreme Court – at the Court's discretion – if it determines that a question of general interest or importance is involved, that the laws should be re-examined, or that the lower court's decision conflicts with an earlier appellate decision. This is similar to the process the United States Supreme Court uses in accepting cases. In addition, the Court of Appeals may transfer a case to the Supreme Court after an opinion is issued, either upon application of one of the parties or at the request of one of the judges on the appellate panel.

Judges of the court are selected through the non-partisan plan, nationally known as the Missouri Plan. Under the plan, the Appellate Judicial Commission submits the names of three nominees to the Governor. If the Governor fails to make an appointment with 60 days of the nominees being named, the Commission shall make the appointment. Once the judge has served for at least a year, he or she is placed on the general election ballot for a retention vote of the people. If retained, judges serve a term of 12 years.

See also: List of judges of the Supreme Court of Missouri

Paul C. Wilson is the latest appointee to the Court, having taken office in December 2012. The judges rotate the two-year term of Chief Justice among themselves. The Chief Justice is Constitutionally empowered to preside over the court and to be the "chief administrative officer" of the state judicial system.[1] The current Chief Justice is Patricia Breckenridge, whose term began July 1, 2015 and will serve through June 2017.[2]

Clerk of the Supreme Court of Missouri

The Clerk of the Supreme Court of Missouri is responsible for a wide range of duties, including the supervision of the internal administrative function of the Court itself as well as the planning and administrative direction of the Missouri Judicial Conference, the organization of all the state's judges. As of October 1, 2012, the clerk is Bill L. Thompson.