A cell is a small room used by a hermit, monk, anchorite or nun to live and as a devotional space. They are often part of larger communities such as Catholic and Orthodox monasteries and Buddhist vihara,[1] but may also form stand-alone structures in remote locations. 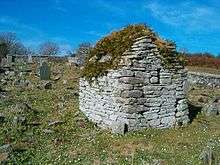 The word cell comes from the Old French celle meaning a monastic cell, itself from the Latin meaning room,[2] store room or chamber.[3]

A cell in the Christian context is a name for the living quarters of monastics, either male or female. Usually, a monk's cell is small and contains a minimum of furnishings.

A cell may be an individual living space (room) in a building, usually within a cenobitic monastery, for a monk or nun, or it may refer to hermit's primitive solitary living space (possibly a cave or hut in the desert or forest) isolated from monasteries and other inhabited places. In a cenobitic setting the building of "cells” also contains communal rooms for eating. A small dependent or daughter house of a major monastery, sometimes housing just one or two monks or nuns, may also be termed a cell.

The first cells were in the Nitrian Desert in Egypt following the ministry of Paul of Thebes[4] Serapion and Anthony the Great.[5] in the mid 3rd century.

See Monastery#Buddhism In Buddhism vihara is often restricted to the rainy season and the vihara retreat. 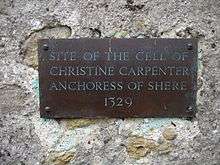 The church at Shere in Surrey had a cell for Christine Carpenter.[6]