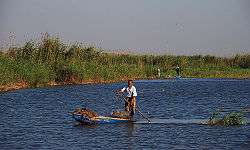 The Therapeutae were a Jewish sect which flourished in Alexandria and other parts of the Diaspora of Hellenistic Judaism in the final years of the Second Temple period. The primary source concerning the Therapeutae is the account De vita contemplativa ("The Contemplative Life"), purportedly by the Jewish philosopher Philo of Alexandria (c. 20 BCE – 50 CE). The authorship has been called into question because of the different stance on Greek philosophy of this work from that of other works that were written by Philo and because elsewhere Philo makes no mention of the Therapeutae[1] although this article will refer to the author as Philo. The author appears to have been personally acquainted with them. The pseudepigraphic Testament of Job is possibly also a Therapeutae text,[2][3] although this possibility is mostly based on the text being noticeably less misogynist than many other early apocryphal texts.

Philo records that they were "philosophers" (cf. I.2) and speaks specifically about a group that lived on a low hill by the Lake Mareotis close to Alexandria in circumstances resembling lavrite life (cf. III.22), and were "the best" of a kind given to "perfect goodness" that "exists in many places in the inhabited world" (cf. III.21). Philo was unsure of the origin of the name and derives the name Therapeutae/Therapeutides from Greek θεραπεύω in the sense of "cure" or "worship" (cf. I.2).

The term Therapeutae (plural) is Latin, from Philo's Greek plural Therapeutai (Θεραπευταί). The term therapeutes means one who is attendant to the gods[4] although the term, and the related adjective therapeutikos[5] carry in later texts the meaning of attending to heal, or treating in a spiritual or medical sense. The Greek feminine plural Therapeutrides (Θεραπευτρίδες) is sometimes encountered for their female members.[6][7][8] The term therapeutae may occur in relation to followers of Asclepius at Pergamon, and therapeutai may also occur in relation to worshippers of Sarapis in inscriptions, such as on Delos.[9] See Therapeutae of Asclepius. 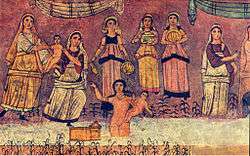 According to Philo, the Therapeutae were widely distributed in the Ancient world, among the Greeks and beyond in the non-Greek world of the "Barbarians", with one of their major gathering points being in Alexandria, in the area of the Lake Mareotis:

Now this class of persons may be met with in many places, for it was fitting that both Greece and the country of the barbarians should partake of whatever is perfectly good; and there is the greatest number of such men in Egypt, in every one of the districts, or nomes, as they are called, and especially around Alexandria; and from all quarters those who are the best of these therapeutae proceed on their pilgrimage to some most suitable place as if it were their country, which is beyond the Maereotic lake.
— De Vita Contemplativa[10]

They lived chastely with utter simplicity; they "first of all laid down temperance as a sort of foundation for the soul to rest upon, proceed to build up other virtues on this foundation" (Philo). They were dedicated to the contemplative life, and their activities for six days of the week consisted of ascetic practices, fasting, solitary prayers and the study of the scriptures in their isolated cells, each with its separate holy sanctuary, and enclosed courtyard:

the entire interval from dawn to evening is given up by them to spiritual exercises. For they read the holy scriptures and draw out in thought and allegory their ancestral philosophy, since they regard the literal meanings as symbols of an inner and hidden nature revealing itself in covert ideas.
— De Vita Contemplativa, para. 28

In addition to the Pentateuch, the Prophets and Psalms they possessed arcane writings of their own tradition, including formulae for numerological and allegorical interpretations.

These men abandon their property without being influenced by any predominant attraction, and flee without even turning their heads back again.
— De Vita Contemplativa para. 18

They "professed an art of healing superior to that practiced in the cities" Philo notes, and the reader must be reminded of the reputation as a healer Saint Anthony possessed among his 4th-century contemporaries, who flocked out from Alexandria to reach him.

On the seventh day the Therapeutae met in a meeting house, the men on one side of an open partition, the women modestly on the other, to hear discourses. Once in seven weeks they meet for a night-long vigil after a banquet where they served one another, for "they are not waited on by slaves, because they deem any possession of servants whatever to be contrary to nature. For she has begotten all men alike free" (De Vita Contemplativa, para.70) and sing antiphonal hymns until dawn.

The 3rd-century Christian writer Eusebius of Caesarea (c. 263–339), in his Ecclesiastical History, identified Philo's Therapeutae as the first Christian monks, identifying their renunciation of property, chastity, fasting, and solitary lives with the cenobitic ideal of the Christian monks.[11]

The 4th-century Christian heresiologist Epiphanius of Salamis (c. 315–403), bishop of Salamis in Cyprus, author of the Panarion, or Medicine Chest against Heresies, misidentified Philo's Therapeuate as "Jessaens" and considered them a Christian group.

The 5th-century Christian writer Pseudo-Dionysius, following Philo, interprets that "Some people gave to the ascetics the name 'Therapeutae' or servants while some others gave them the name monks". Pseudo-Dionysius interprets Philo's group as a highly organized Christian ascetic order, and the meaning of the name "Therapeutae" as "servants".[12]