For other uses, see Montecatini (disambiguation).

Montecatini Terme is an Italian district of 21,095 inhabitants within the province of Pistoia in Tuscany, Italy. It is the most important center in Valdinievole. The town is located at the eastern end of Piana di Lucca and has a strong vocation for tourism, as well as industrial and commercial industries related to the spa, which in turn has increased the interest for hotel accommodation in the region.

The presence of humans in the area of Montecatini Terme is very old. Probably since Paleolithic times, the region was inhabited by nomadic hunters, but it has been thoroughly recorded only from the Mesolithic period, especially in the hills of the Valdinievole of which Montecatini is the major center.

In the early part of the 14th century, the borders of Valdinievole faced a new power: Florence. The Florentines had been the dominating power of the place over, Siena and Arezzo, but while Florence was about to realize its plans for domination in the north-west region the revolt of the Ghibellines in the early 1300 was able to slow down this process. The leader of that revolt was Uguccione della Faggiuola, who in 1312 became imperial vicar and master of Pisa and Lucca. This directly threatened Florence which meant that war was inevitable given that this outcome would forge the future of the whole region of Tuscany.

The decisive year was 1315, when Uguccione della Faggiuola attempted to lay siege to Montecatini, considered a strategic stronghold, but thanks to its excellent location and to the allies of Florence, the attempted siege failed. On 29 August under the walls of Montecatini, the decisive battle was played out. The Guelfi army were taken by surprise by the Ghibellines and by Uguccione della Faggiuola with thousands of casualties and prisoners.

The medieval burg of Montecatini.

The following year Uguccione della Faggiuola was forced to flee and Castruccio Castracani of Antelminelli took his place. The latter became first lord of Lucca, and then Pisa and was able to extend his power in Tuscany more and more. In 1323 Castruccio Castracani attempted to seize one of the strongholds of Florence, Fucecchio, but was wounded and forced to retreat, and so began a slow but sure recovery of Florentine power, and its return to dominate the town of Montecatini.

In 1530 at the foot of Montecatini, baths were constructed and adapted to contain the already known Spa waters, which had assumed the name "Medici" and "of blackbirds".

Montecatini saw war again, and was in the center of the dispute, which began in 1554. The players were Cosimo I de' Medici and Pietro Strozzi who were representatives of Florence with a Hispanic alliance with Siena as well as a French alliance. On 21 June of that year, Montecatini was occupied by Siena. Montecatini was actually not opposed to this occupation, because Cornelio Bentivoglio declared himself as a liberator.

Montecatini, the once impregnable fortress fell into poor repair caused by the centuries of battles and general lack of maintenance. So when the Medici and their troops went on the offensive, Montecatini fell under the Medici who plundered mercilessly, even taking away doors and windows. Cosimo not happy and full of resentment for Montecatini, ordered to "destroy the foundations", and so day after day, eight hundred soldiers destroyed the walls, towers and houses, leaving only one hundred and sixty houses, three convents, the palace of the Podestà and the Palace of Justice standing after this onslaught.

The area had remained a health hazard due to the stagnant water (of Padule of Fucecchio). Local entrepreneurs were flanked by those from abroad, and under the pressure of the Grand Duke Leopold, built channels for the disposal of water and the land was reclaimed, Baths were constructed to facilitate the use of the popular hot springs: Tettuccio 1779, Bagno Regio 1773 and the Terme Leopoldine 1775.

The following centuries passed quietly until the early 20th century, specifically 1905, when what was once a small village at the foot of the hill of Montecatini became "City of Bagni di Montecatini". This name, however, had no luck, and was changed later to the present name of "Montecatini Terme". 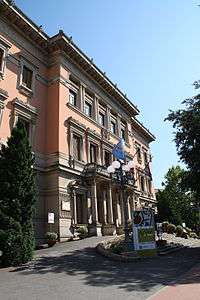 During the same period around the start of the 20th century, the tourist experience was diversified and improved. The hotels had grown in number and quality, it was also noted the necessity to combine health, fun, relaxation and sport. It soon became home to fashionable restaurants, theaters, nightclubs, and a casino. Celebrities began to frequent the city. In fact, between the end of the 1800s and the early decades of the 1900s it was easy to meet, in the tree-lined avenues, parks or at the bars of the city, people like Giuseppe Verdi, Pietro Mascagni, Ruggero Leoncavallo, Trilussa, Beniamino Gigli, or Luigi Pirandello.

With these celebrities Montecatini became a true meeting point of international renown: here discussions of politics, business closures were agreed and its reputation grew to the point that, in 1926 an attendance of 75,000 non residents was recorded in the city, a remarkable figure for that time.

The reputation of the town was recognized with the visit from the leader of government, Benito Mussolini, 16 May 1930, with Lando Ferretti.

During World War II, Don Julius Facibeni and l'Opera della Divina Provvidenza Madonnina del Grappa di Firenze ran an orphanage in Montecatini at the Villa Forini Lippi. In it, as in the case of the others in Tuscany, many Jewish children found shelter, among them the brothers Cesare and Vittorio Sacerdoti. Facibeni received the honor of the righteous among nations by Yad Vashem of Jerusalem.

Montecatini Terme is one of the most popular destinations in Italy for thermal spa tourism.

The local specialty, waffles Montecatini, made with egg and sugar, is much sought after as a dessert.

Christian Dior died in a hotel at Montecatini.