Mount Bizan (眉山, Bizan) is a mountain in Tokushima. Its name is formed of the kanji for eyebrow, and it is said to have earned this name because the mountain looks like an eyebrow from all views. Known as a symbol of Tokushima City, the name Mount Bizan appears in many school songs in the city district, such as the Tokushima Prefectural Jonan High School, Tokushima Municipal High School and many more. In 2007 Mount Bizan became widely known as the setting for a national movie of the same name, based on a book by Sada Masashi.

Due to its prominent position in the middle of Tokushima City, Mt. Bizan is widely recognised as one of the classic views of Tokushima City. It is also a well known area for cherry blossom viewing, and offers an almost 360 degree view of the surrounding area from its peak. On a clear day you can even see as far out to Awaji Island and distant Wakayama Prefecture on the shores of mainland Japan. The view at nighttime is equally impressive, and while it is not well known, the top of Mt. Bizan is one of Japan's most beautiful spots for nighttime scenery. The slopes of the mountain are home to several shrines and temples, and the peak is adorned with several tourist facilities, including a Burmese pagoda to honor fallen soldiers from World War II.

Despite earning a certain amount of fame from a national movie of the same name, the famous Wada no Ya store that used to stand at the mountain's peak shifted down to the Awa Odori Kaikan Hall, and even today there is only a single small restaurant on top of the mountain. Since the area had little to offer in the way of tourist facilities, it was removed from many tourist courses and became a point of discussion amongst many of the local radio stations. Today it is widely accepted that while the scenery from Mt. Bizan is very pretty, it is very unfortunate that there is little for people to do there. However, it is expected that the movie may bring the area some added popularity that can be further used to work on the area's reputation.

The area on top of Mt. Bizan is home to several broadcasting stations, including NHK Tokushima, Shikoku Hoso, and FM Tokushima. The signals broadcast from here reach mainly down into the Yoshino River Basin area, out across the waters to Hyogo Prefecture and Wakayama Prefecture and many other local areas. The area is also used as a broadcasting area for community radio stations such as FM Bizan, as well as digital TV. 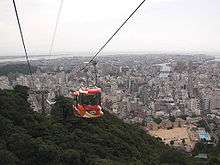 The Bizan Ropeway (眉山ロープウェイ, Bizan Rōpuwei) is an aerial lift that provides access to the top of Mount Bizan. It is the only line Tokushima City Tourist Association (徳島市観光協会, Tokushima-shi Kankō Kyōkai) operates, while the public company also operates Awa Odori Kaikan, a museum devoted to Awa Dance. The ropeway departs from the 5th floor of the museum. The line opened in 1957.

This article is issued from Wikipedia - version of the 9/9/2013. The text is available under the Creative Commons Attribution/Share Alike but additional terms may apply for the media files.