Yoshino River is also the name for the upper reaches of the Kinokawa River, on the other side of the Kii Channel in Nara Prefecture. 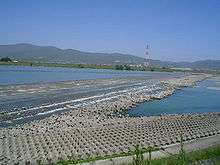 The Yoshino River (吉野川 Yoshino-gawa) is a river on the island of Shikoku, Japan. It is 194 km (121 mi) long and has a watershed of 3,750 km2 (1,450 sq mi). It is the second longest river in Shikoku (slightly shorter than the Shimanto), and is the only river whose watershed spreads over the four prefectures of the island.

It is regarded as one of the three greatest rivers of Japan along with the Tone and the Chikugo, and is nicknamed Shikoku Saburō (四国三郎; Saburō is a popular given name for a third son).

The Yoshino rises from Mount Kamegamori (瓶ケ森) in Ino, Kōchi Prefecture and flows to the east. In Otoyo it turns to the north and crosses the Shikoku Mountains. The gorge, named Ōboke Koboke, is a famous tourist attraction of Shikoku. In Ikeda, Tokushima Prefecture it turns to the east again and pours into the sea at the north of Tokushima city. Its major tributaries include Ananai, Iya, Dōzan, Sadamitsu, and Anabuki.

The river has some "submerged bridges" (潜水橋 Sensuikyō), equivalents of Chinkabashi of the Shimanto, which lack parapets in order not to be washed away by floods. Reconstruction of the Yoshino Daiju Dam (吉野川第十堰 Yoshino-gawa Daijūzeki) near its mouth provoked much controversy among environmentalists.