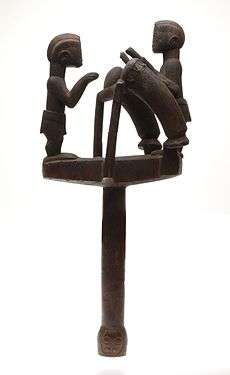 Ivory Coast's national anthem is L'Abidjanaise. French is the official language taught and spoken by Ivorians but many Ivorians have their own ethnicie tribe's language. 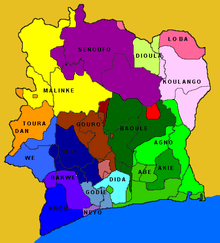 Each of the ethnic groups has its own folk music traditions, most showing strong vocal polyphony (a common characteristic of African music),. Talking drums are common among the Nzema people, who are also known for their abissa purification dance, part of the popular N'Guess Bon Sens, Savane Alla, Kolouba Nobert, Religious music of Emi Tiapo dance music of Meiway.

Gbégbé, a Bété rhythm, has been a part of popular music since Ivory Coast's independence, popularized by Soeurs Comöé and later, Frères Djatys and Sery Simplice. Ernesto Djédjé, however, is considered the father of Ivorian popular music. Using one of the folk rhythms of the Bété, as well as his teacher Amédée Pierre's dopé style, Djédjé has long been an advocate of Ivorian music, railing against the "Congolization" of the Abidjan scene. Outside of Ivory Coast, Djédjé is best known for 1977's Gnoantre-Ziboté, which was a pan-African hit, and found some success in France and Canada. He plays a type of music called ziglibithy.

Since Djédjé, few Ivorian musicians have been able to achieve the same level of fame. Luckson Padaud's laba laba style, which is similar to the Bété ziglibithy, has had some success, as has Gnaore Djimi's polihet.

The most popular styles in Ivory Coast are imported reggae from Jamaica, hip hop from the United States , Zouk from the Caribbean and Couper Decaler from Ivory Coast; the country has produced notable musicians of both genres, especially Alpha Blondy whose brand of Afro-reggae became a national hit following his appearance on the TV show First chance in 1983. Tiken Jah Fakoly is another popular Ivorian reggae musician, who has been living in exile due to his politically outspoken lyrics. Perhaps uniquely in Africa reggae is the most popular music genre and Abidjan is seen as one of the reggae capitals of the world.[1]

Hip hop has been popular in Ivory Coast since the mid-1990s, and includes a gangsta rap-influenced style called rap dogba. Notable hip hop musicians include All Mighty, Rudy Rudiction, M.C. Claver and Angelo. The new R&B group 2431(formerly known as Monah) is also taking over, as R&B became very famous since U.S. chart-topping Akon had a concert in Abidjan, late 2006. Other R&B stars include Teeyah and Tour de Garde.

Located in the North West, Ivory Coast is on the West coast of North Africa and was surrounded by water. Not a caribbean country but influenced by the French Caribbean, Zouk was used to share love messages, express love and beautiful poems song just like the troubadour in Europe during the Renaissance.

Which is a famous genre used by many Western African countries such as Nigeria, Togo, Mali, Burkina Faso, Congo, Benin etc...

Zoblazo, pioneered from 1990 by Freddy Meiway, the former front man to the bands Les Genitaux, Defense d'Ivoire, and Zo Gang,integrated traditional rhythms of southern Ivory Coast with electronic instruments and party lyrics. His success across the country and West Africa in the mid to late 1990s spawned a string of hit Zoblazo records that has continued through 2007, even as other dance styles, like prudencia and coupé décalé have edged out Zoblazo. Even Meidway, through a series of guest musicians like Manu Dibango, Jacob Desvarieux, Lokua Kanza, Kojo Antwi and Koffi Olomidé has added Cuban, Mbalax and Ghanaian Hi-life musics.[2]

Zouglou, a recent Ivorian popular tradition, comes from the early 1990s when university students, upset about living conditions on campus, began rallying around Didier Bilé. Zouglou was satirical in nature, and usually accompanied by a dance to a fictional god. The most popular artists of Zouglou are Petit Yodé & l'enfant Siro, Magic System, Petit Denis and Espoir 2000. Many popular Ivorian zouglou artists are now living in exile due to their political support to the former president Laurent Gbagbo.

Coupé-Décalé was pioneered by the late Stephane Doukouré (a.k.. "Douk-Saga") during the post-2002 militaro-political crisis in Ivory Coast. It reflects the aspirations of a large section of Ivorian youth. Coupé-Décalé is a very percussive style featuring African samples, deep bass, and repetitive, minimalist arrangements. Lyrically, Coupé-Décalé is about happiness, expressing daily life in Ivorian society, and also gives an insight into the political situation of the country. The prominent artists of Coupé-Décalé are Arafat DJ (Yôrôbô) with its concepts coming out every time that his is asked for. His music is for the youth.And many other talented Ivorian artists. The most prominent singer in actuality is named DJ Mix with its croubata Dance, derived from Coupé-Décalé. Other names like David Tayorault, Afrika Representer, Kédjévara, Salvador Anderson, DJ léo, Bébi Philip, Safarel, Serge Beynaud, Débordeau, and Dolisiana are recurrent.