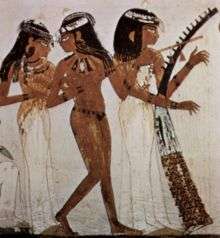 Music has been an integral part of Egyptian culture since antiquity. The Bible documents the instruments played by the ancient Hebrews, all of which are correlated in Egyptian archaeology. Egyptian music probably had a significant impact on the development of ancient Greek music, and via the Greeks was important to early European music well into the Middle Ages. The modern music of Egypt is considered Arabic music as it has been a source for or influence on other regional styles. The tonal structure of Arabic music is defined by the maqamat, loosely similar to Western modes, while the rhythm of Arabic music is governed by the iqa'at, standard rhythmic modes formed by combinations of accented and unaccented beats and rests.

The ancient Egyptians credited the goddess Bat with the invention of music. The cult of Bat was eventually syncretised into that of Hathor because both were depicted as cows. Hathor's music was believed to have been used by Osiris as part of his effort to civilize the world. The lion-goddess Bastet was also considered a goddess of music.

In prehistoric Egypt, music and chanting were commonly used in magic and rituals. Rhythms during this time were ovular and music served to create rhythm. Small shells were used as whistles.[1](pp26–30)

During the predynastic period of Egyptian history, funerary chants continued to play an important role in Egyptian religion and were accompanied by clappers or a flute. Despite the lack of physical evidence in some cases, Egyptologists theorize that the development of certain instruments known of the Old Kingdom period, such as the end-blown flute, took place during this time.[1](pp33–34)

The evidence is for instruments played more securely attested in the Old Kingdom when harps, flutes and double clarinets were played.[2] Percussion instruments and lutes were added to orchestras by the Middle Kingdom. Cymbals frequently accompanied music and dance, much as they still do in Egypt today.

Arabic music is usually said to have begun in the 7th century in Syria during the Umayyad dynasty. Early Arabic music was influenced by Byzantine, Indian and Persian forms, which were themselves heavily influenced by earlier Greek, Semitic, and ancient Egyptian music.

Egyptians in Medieval Cairo believed that music exercised "too powerful an effect upon the passions, and leading men into gaiety, dissipation and vice." However, Egyptians generally were very fond of music. Though, according to E.W. Lane, no "man of sense" would ever become a musician, music was a key part of society. Tradesmen of every occupation used music during work and schools taught the Quran by chanting.[3](p359)

The music of Medieval Egypt was derived from Greek, Persian and Indian traditions. Lane said that "the most remarkable peculiarity of the Arab system of music is the division of tones into thirds," although today Western musicologists prefer to say that Arabic music's tones are divided into quarters. The songs of this period were similar in sound and simple, within a small range of tones. Egyptian song, though simple in form, is embellished by the singer. Distinct enunciation and a quavering voice are also characteristics of Egyptian singing.[3](pp360–361)

Male professional musicians during this period were called Alateeyeh (plural), or Alatee (singular), which means "a player upon an instrument". However, this name applies to both vocalists as well as instrumentalists. This position was considered disreputable and lowly. However, musicians found work singing or playing at parties to entertain the company. They generally made three shillings a night, but earned more by the guests giving more.

Female professional musicians were called Awalim (pl) or Al’meh, which means a learned female. These singers were often hired on the occasion of a celebration in the harem of a wealthy person. They were not with the harem, but in an elevated room that was concealed by a screen so as not to be seen by either the harem or the master of the house. The female Awalim were more highly paid than male performers and more highly regarded than the Alateeyeh as well. Lane relates an instance of a female performer who so enraptured her audience that she earned to fifty guineas for one night's performance from the guests and host, who were not considered wealthy.

Egyptian music began to be recorded in the 1910s, when Egypt was still part of the Ottoman Empire. The cosmopolitan Ottomans encouraged the development of the arts, encouraging women and minorities to develop their musical abilities. By the fall of the Empire, Egypt's classical musical tradition was already thriving, centered on the city of Cairo. In general, modern Egyptian music blends its indigenous traditions with Turkish, Arabic, and Western elements.

Since the end of World War I, some of the Middle East's biggest musical stars have been Egyptian. Contemporary Egyptian music traces its beginnings to the creative work of luminaries such as Abdu-l Hamuli, Almaz and Mahmud Osman, who were all patronized by the Ottoman Khedive Ismail, and who influenced the later work of the 20th century's most important Egyptian composers: Sayed Darwish, Umm Kulthum, Mohammed Abdel Wahab, Abdel Halim Hafez, and Zakariyya Ahmad. Most of these stars, including Umm Kulthum and Najat Al Saghira, were part of the classical

Religious music remains an essential part of traditional Muslim and Coptic celebrations called mulids. Mulids are held in Egypt to celebrate the saint of a particular church. Muslim mulids are related to the Sufi zikr ritual. The Egyptian flute, called the ney, is commonly played at mulids. The liturgical music of the Alexandrian Rite also constitutes an important element of Egyptian music and is said to have preserved many features of ancient Egyptian music. 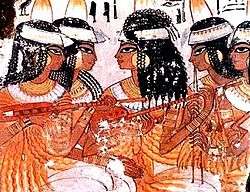 Lute and double pipe players from a painting found in the Theban tomb of Nebamun, a nobleman of the 18th Dynasty of the New Kingdom, c. 1350 BC

Egyptian folk music, including the traditional Sufi dhikr rituals, are the closest contemporary music genre to ancient Egyptian music, having preserved many of its features, rhythms and instruments.[4][5]

The Egyptians even used their own teeth as instruments they would make tapping noises and would use special plucks to make interesting noises with their teeth. The 20th century has seen Cairo become associated with a roots revival. Musicians from across Egypt are keeping folk traditions alive, such as those of rural Egyptians (fellahin), the Nubians, the Arabs, the Berbers, the Gypsies and the Bedouins. Mixtures of folk and pop have also risen from the Cairo hit factory.

Since the Nasser era, Egyptian pop music has become increasingly important in Egyptian culture, particularly among the large youth population of Egypt. Egyptian folk music continues to be played during weddings and other traditional festivities. In the last quarter of the 20th century, Egyptian music was a way to communicate social and class issues. Among some of the most popular Egyptian pop singers today are Mohamed Mounir and Amr Diab.

Sawahli (coastal) music is a type of popular music from the northern coast, and is based around the simsimiyya, an indigenous stringed instrument. Well-known singers include Abdo'l Iskandrani and Aid el-Gannirni.

Nubians are native to the south of Egypt and northern Sudan, though many live in Cairo and other cities. Nubian folk music can still be heard, but migration and intercultural contact with Egyptian and other musical genres have produced new innovations. Ali Hassan Kuban's efforts had made him a regular on the world music scene, while Mohamed Mounir's social criticism and sophisticated pop have made him a star among Nubians, Egyptians, and other people worldwide. Ahmed Mounib, Mohamed Mounir's mentor, was by far the most notable Nubian singer to hit the Egyptian music scene, singing in both Egyptian Arabic his native Nobiin. Hamza El Din is another popular Nubian artist, well-known on the world music scene and has collaborated with the Kronos Quartet.

Western classical music was introduced to Egypt, and, in the middle of the 18th century, instruments such as the piano and violin were gradually adopted by Egyptians. Opera also became increasingly popular during the 18th century, and Giuseppe Verdi's Egyptian-themed Aida was premiered in Cairo on December 24, 1871.

During the Abbasid and Ottoman dynasty Egypt was one of the main musical hubs in the middle east and therefore after the fall of the Ottoman Empire in 1923 Egypt became the capital of Arabic music where classical instrument such as the oud, qanun and ney were widely used. The typical tact (ensemble) consisted of an Oud player, qanun player, ney player and violin player. The takht (literally meaning a sofa) was the most common form of ensembles in the early 20th century before the adoption of more orchestral instruments which were introduced by composers such as Mohamed El Qasabgi, Riad Al Sunbati and Mohammed Abdel Wahab.

One of the most respected early electronic music composers, Halim El-Dabh, is an Egyptian. However, the Egyptian electronic music scene has only gained a mainstream foothold recently in the form of techno, trance and dance pop DJs such as Aly & Fila.

In the early 21st century, interest in the music of the pharaonic period began to grow, inspired by the research of such foreign-born musicologists as Hans Hickmann. By the early 21st century, Egyptian musicians and musicologists led by the musicology professor Khairy El-Malt at Helwan University in Cairo had begun to reconstruct musical instruments of Ancient Egypt, a project that is ongoing.[6]