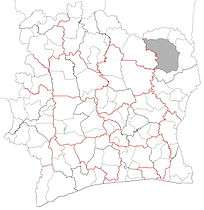 There is one area of Ivory Coast that is not governed by departments: the portion of Comoé National Park that is within Zanzan District is not assigned to any department.

Departments were first created in 1961. During their existence, they have been first-, second-, and third-level administrative subdivisions. 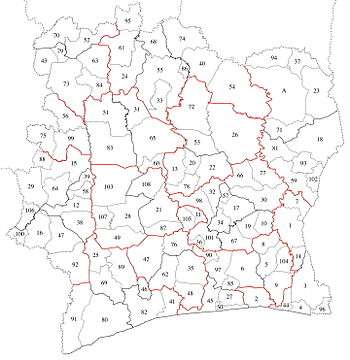 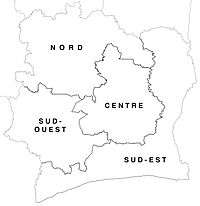 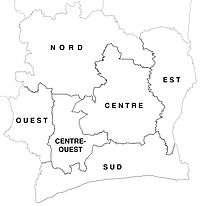 Departments were established in 1961 and were the original first-level administrative subdivision of independent Ivory Coast.[1] Initially, there were just four departments: Centre, Nord, Sud-Est, and Sud-Ouest. In 1963, two more departments were created: Est was created by dividing Sud-Est, and Centre-Ouest) was created by dividing Sud-Ouest. As a result of the divisions, Sud-Est was renamed Sud and Sud-Ouest was renamed Ouest. 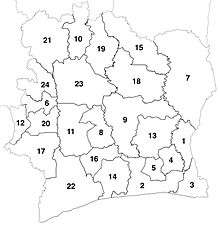 The 24 new departments that were created in 1969. These boundaries were consistent until departments began to be divided in 1974.

Due to a lack of government resources, the 1969 changes were not fully implemented until 1974.

Subsequent divisions and relegation to second-level

Departments are named after the city or town that serves as the seat of the department. In most cases, this is the most populous settlement in the department.

Each department is divided into two or more sub-prefectures, which serve as fourth-level administrative subdivisions. There are currently 510 sub-prefectures in the country.

Current departments by district and region

There are six departments of Ivory Coast that have been eliminated.

Maps of departments through time